“Connection leads to trust leads to empathy. Inclusive books are important for all of us because we value and absorb the things we read and hear,” said Burnette. “The more we learn about each other, the less we fear the unknown. The Brain Lair Bookstore will allow me to start with diversity but focus on inclusivity.”

Burnette, who has worked for 16 years in South Bend as a teacher/librarian, said she will look to smaller publishers with diverse lists, like Lee & Low Books and Akashic Books, as well as larger publishers that have diversity-specific imprints, though, she said, she looks forward to the day when publishers don’t feel the need to launch an entirely separate imprint.

“I’ve also been looking at a lot of what We Need Diverse Books is doing, as well as this nonprofit that’s looking to publish new indigenous voices,” she said. “I grew up on the South Side of Chicago and most of the books we had in school did not represent who we were. I was lucky I could still find role models, but I think because we are so isolated today, kids need to see themselves in books so that they can have something aspire to.” 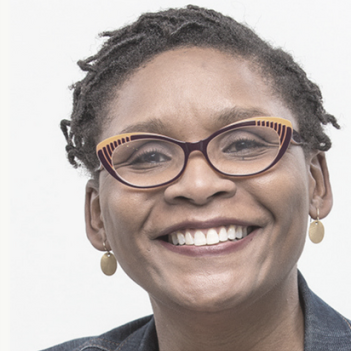 Kathy Burnette, owner of The Brain Lair Bookstore, set to open this year.

“The Brain Lair,” is an anagram for “The Librarian,” Burnette said, and is also her handle for her social media accounts and blog. In addition to titles for young people ages 0-18, the aptly named Brain Lair will offer a few adult books and some non-book items, including locally made gifts, Out of Print merchandise, Blue Q socks, and whatever else the community requests.

Aside from selling books and gifts, The Brain Lair will donate books to local groups, pursue volunteer opportunities, offer discounts to teachers and college students, develop a reading wellness campaign, make connections with local schools, and host community events. Burnette also wants to launch a teen festival and hopes to host workshops to introduce local teachers to diverse books they can teach in their classrooms.

“I’ve made a list of publishers that specialize in different types of diverse books: racial, sexual, disability. I’m just looking for inclusive books; when we say ‘diversity,’ a lot of times we mean people of color, but I wanted to go beyond that,” she said, naming books like Dear Martin by Nic Stone (Crown Books for Young Readers) and The Hate U Give by Angie Thomas (Balzer + Bray), but also Turtles All the Way Down by John Green (Dutton), which takes on mental illness, and The Inexplicable Logic of My Life by Benjamin Alire Saenz (Clarion Books), which deals with sexuality and family.

“I’m trying to get books not just to kids of color, but I feel that all kids need these kinds of books because it also builds empathy the other way when you normalize everyone,” she said. “When you see that it’s not just the civil rights struggle, it’s not just slavery, it’s just normal people going about their every day, then you get a different impression. When you always see marginalized people in that kind of role in every book you read, then that’s what you’re going to expect.”

To prepare to open her store, Burnette recently completed the St. Mary’s Women’s Entrepreneurship Initiative in nearby Notre Dame as one of 16 applicants selected for the intensive weekly program.

“The SCORE people come, banks come, different business people from the community come to this program and they help you develop your business plan and put you in touch with other people who can help you make your dream a reality,” she said. “We learned about what it takes to run a business, but also about work-life balance. Overall, it helped me define which way I really wanted to go with this.”

Burnette also got jobs working at the Notre Dame Bookstore and the local Starbucks in order to get some retail experience. “I wanted to see what it was like out there not just for people who own businesses but workers,” she said. “One of my main things is going to be personal service to make sure that I, and eventually my staff, are reading the books so that we can match books to readers.”

Earlier this month, Burnette launched an Indiegogo campaign to raise $50,000, about a third of her startup costs. So far, the campaign, which has nine more days to go, has raised $8,587. She hopes to borrow much of the rest of her funding from the Small Business Association (SBA); luckily, the Women’s Entrepreneurship Initiative helps streamline the loan process for SBA applicants.

Burnette’s Indiegogo features a variety of perks and swag for different funding levels, including signed books that authors have donated directly, such as The Girl Who Drank the Moon by Kelly Barnhill (Algonquin Young Readers), The Star-Touched Queen by Roshani Choksi (St. Martin’s Griffin), and the forthcoming Like Vanessa by Tami Charles (Charlesbridge). Burnette said she was able to use the connections she has built up over the years as a librarian and on book award committees, including connections with the authors and illustrators with whom she has attended nErDcamp in Michigan for the last five or six years.

As a librarian, Burnette, who holds degrees in both library science and accounting, has worked on book committees like One Book, One School, as well as national book awards committees for the Printz Award and the Cybils Awards, and statewide awards committees, including for the Hoosiers list.

Burnette currently has a few locations in mind for the store and will work there full-time once it opens, first with two volunteers from the library and eventually with paid employees. Right now, she is also aiming to stage a special trial opening on July 8 for her author, librarian, and bookseller friends, who will be on their way to nErDcamp, to check out the store for one day.

“I’m hoping my store will become a place where people just come to hang out. I’m looking to create something that provides more of an experience because I think people are looking for more of that now; they want to get out from behind their computers,” said Burnette. “I’m hoping I can create a place where people can bring their families and hang out and I can talk to them and get to know them.”

Burnette said right now she is working on setting up a series of local pop-up shops, with the first one on April 28, Independent Bookstore Day. She also plans to attend the Paz and Associates “Bookseller Boot Camp” retreat this August and has applied for a scholarship to Children's Institute in June.