Ci5: Jason Reynolds on His Journey From Reluctant Reader to Award-Winning Author

In his breakfast keynote speech on Friday, April 7, at the ABC Children’s Institute, author Jason Reynolds told booksellers how being a reluctant reader as a child shaped his journey as a writer. 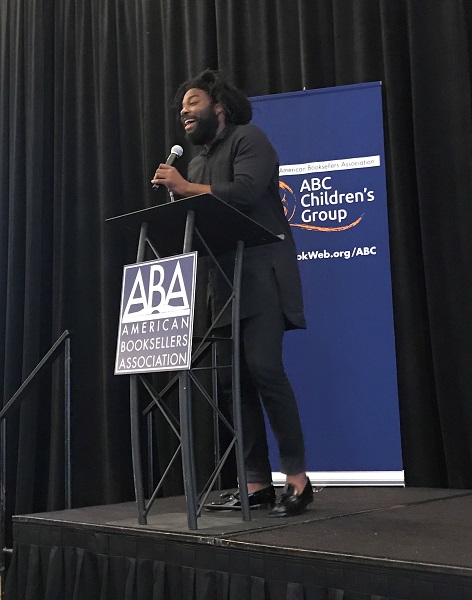 Reynolds has been writing books for 13 years and is the author of critically acclaimed titles for children, including When I Was the Greatest, for which he received the Coretta Scott King/John Steptoe Award for New Talent. His forthcoming titles include Patina (August 2017) and the YA novel Long Way Down (October 2017), both from Atheneum/Caitlin Dlouhy Books.

In his talk entitled “Karibu Means Welcome,” Reynolds told booksellers that his goal as an author has always been to write books for children who do not feel connected to the literature available to them.

Reynolds grew up in a poor black neighborhood in Washington, D.C., in the 1980s and 1990s, where, he said, everyone you met was either dealing or doing drugs, so it was hard to take teachers seriously when they assigned titles such as Of Mice and Men or To Kill a Mockingbird; the stories were just too hard to relate to.

“To Kill a Mockingbird wasn’t about me. I never saw any Atticus Finches in my neighborhood, but I knew a whole lot of Boo Radleys,” Reynolds said. “If you were a kid growing up at this time, there are no books being published, or very few that we knew about, [reflecting] what it was like to be a kid in contemporary times, the 1980s and 1990s. We were still reading The Bluest Eye, which I love, but when you are 12 growing up in a neighborhood like mine, The Bluest Eye seems so far away.”

Reynolds actually gave up on reading books at the age of nine and didn’t read another one until college. Ultimately, it was rap music that steered him back onto a literary track, he said. While people outside the culture disparaged it, rap was, for many, a revolutionary new literary medium, one that didn’t make them feel alienated because featured artists spoke from experiences they shared.

Rappers from Queen Latifah to Tupac were that generation’s YA authors, said Reynolds, adding that the first album he ever bought, Latifah’s “Black Reign,” inspired him to begin writing his own poems.

While he managed to graduate from high school having never read a book, Reynolds’ time at the University of Maryland did not go as smoothly; he failed his writing classes and had his poetry torn apart by professors. During his college years, Reynolds found work at a bookstore in the local mall. Karibu Books, which carried books written by people of African descent, was where Reynolds related to books for the first time, starting with Richard Wright’s Black Boy and moving on to the works of Toni Morrison.

Around the same time, a new genre was bursting onto the literary scene, Reynolds said: street fiction, or urban fiction, which featured titles such as Every Thug Needs a Lady and Crackhead, with Triple Crown Publications leading the publishing pack. At Karibu, these types of books were selling more than anything else in the store, despite the owner’s misgivings about the quality of the literature. Over the year that Reynolds worked at Karibu, urban fiction became both the new literary craze and the new literary pariah, as critics labeled it a disgrace to black literature and predicted it would be the death of a generation. But Reynolds said he recognized why these books spoke to so many readers.

“I [was] 19 years old, so I felt a little differently. I understood the problems. I understood how complicated these books were, but I also understood why they were working, and nobody wanted to talk about why they were working,” he said. “Everybody just wanted to say this is terrible: this is all trash; this is no good; people don’t want to be intelligent. Nobody was asking, Why are people buying these books? What is making them work?”

But these books were serving a purpose, Reynolds said. They were filling the same void that rap music filled for him years before. “There was something that seemed very honest, very raw for some of us,” he said. “For certain pockets of the country, certain communities around the country, it was like, This is my life, whether you like it or not. You judging this book is you judging my life.”

After leaving the bookstore, Reynolds struck out for New York City to try to make it as a writer. Six months after moving to Brooklyn, he was signed to his first book deal and spent two years working as a middle school teacher, in restaurants and coffee shops, in clothing stores, and at NPR to make ends meet. The book finally came out in 2008 and flopped; Reynolds was so disappointed he almost quit the business. It was the advice of his friend, the author/illustrator Christopher Myers, son of Walter Dean Myers, that prevented him from leaving his chosen profession. Myers challenged Reynolds to write the story of the life he knew and to write it in his natural tongue, to put his story on the page “just as you see it and just as you say it.” In 2014, Atheneum Books for Young Readers published When I Was the Greatest, based on Reynolds’ own life.

Since then, Reynolds’ work has continued to garner honors and awards: Boy in the Black Suit was named a Coretta Scott King Honor Book; All American Boys (co-written with Brendan Kiely) was also a King Honor Book and the winner of the Walter Dean Myers Award. As Brave As You, his middle grade debut, was a Time Book of the Year and winner of the American Library Association’s Schneider Family Book Award; Ghost, the first book in Reynolds’ middle grade Track series, was a National Book Award finalist (all Atheneum/Caitlyn Dlouhy Books).

Reynolds said that to prevent other children from growing up in a world without books, as he did, booksellers need to be aware of and to sell diverse books, to expose children to stories that speak to them, not alienate them. It’s booksellers’ jobs, he said, to do so through “the selections you have in your stores, by what you know about things that are different from you, the stories and the books that may seem a little far to the left, that may seem on the margins; it’s your responsibility to know those books, too.”

Booksellers must try to relay this sense of inclusiveness to customers however they can, he said, noting that the word “karibu” literally means “we are happy you are here.”

“I needed somebody to say [that to me], but not just people. I needed the books to represent me, and they didn’t,” Reynolds said. “Now we have a few more options, but it is your responsibility to make sure people who come into your store know that they’re welcome there and that you are happy they are here, that their story is represented, and that what they need they may be able to find in your space.”