Husband-and-wife team Ted and Nicole Wheeler have launched the Dundee Book Company, a mobile bookstore in Omaha, Nebraska, that offers a curated selection of new books by local authors; new and notable fiction, nonfiction, and poetry; and books from independent presses.

The Wheelers set up their traveling book cart, which carries a rotating stock of inventory, at different events across the city, bringing books to places where people are already congregating. The shop’s first event took place on Wednesday, August 2, at Pageturners Lounge, a local bar co-owned by indie singer Conor Oberst. The business’ first jaunt went very well, according to Ted Wheeler, who will go on to host Pageturners’ Literary Pub Quiz on the first Wednesday of every month, with Dundee Book Company present at each event.

“We had a good reception,” Wheeler said. “It took a little while for people to understand what we were and what we were doing there, but it was a lot of fun to talk to people about books and explain our selection …Basically, the idea is to go to events and try to meet people more on their own terms and talk about books in a more casual setting.”

The book cart, which has six shelves holding about 120 books, was custom-made from rescued barn wood by Barnboards & Salvage in Des Moines. Having a relatively small number of books makes it easier to carefully curate their selection, Wheeler said; they also try to adjust their inventory according to each event. 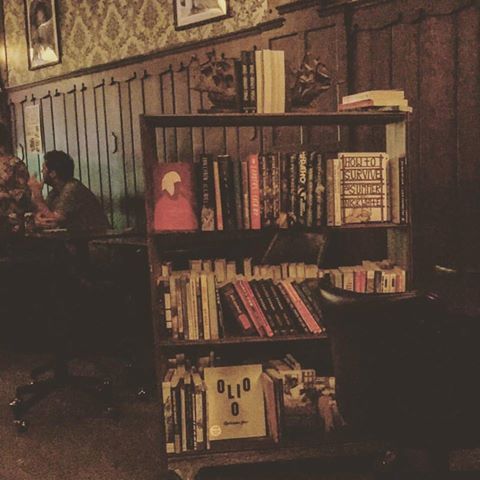 Going forward, Dundee Book Company will partner with other local groups on initiatives, such as a neighborhood street fair and an event for Banned Books Week. On August 23, the business will set up shop at Mercury cocktail lounge for a local authors night in partnership with the Omaha Public Library Foundation, where a portion of the night’s proceeds will benefit the library. Other future events will include book launch parties, reading series, and fundraisers.

At the Pageturners event, which was attended by about 50 people, Dundee sold around 40 books in two hours, said Wheeler, assisted by the Square portable credit card reader. Wheeler’s own debut novel, Kings of Broken Things, historical fiction set in Omaha during World War I, had come out Tuesday, August 1, from Little A, so he also sold and signed the book that night. Wheeler previously published a collection of short stories called Bad Faith (Little A, 2016), and his fiction has appeared in numerous literary journals.

But it is Nicole, who works in advertising, and not the more traditionally literary member of the couple who essentially serves as the public face of the store, according to Wheeler.

“Nicole works for Hudl, a startup sports tech company; she doesn’t really have an explicit literary connection, but in some ways, she is more the face of the store because she really likes selling things and talking to people and being in retail,” he said.

Wheeler said he and Nicole decided to start a mobile bookstore because there were none where they lived in Dundee, a historic neighborhood populated by a diverse community, from refugee families to billionaire Warren Buffett, and the store’s namesake. 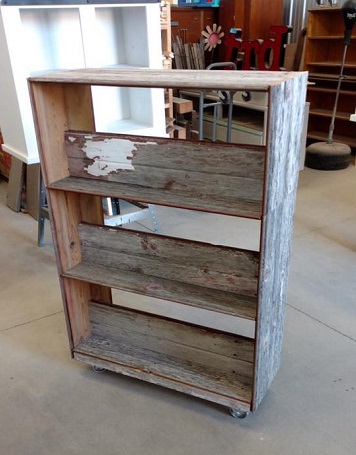 “We had always talked about how our neighborhood doesn’t have a bookstore and would say to our friends how awesome it would be if someone opened one,” Wheeler said. “I think doing a book cart was kind of like not taking the entire leap of opening a storefront — we could have what we wanted in the neighborhood and just do it on a smaller basis. Beyond that, with me having my books out the last couple years and doing events around town, we saw just how much we enjoyed building community around books and being in the literary community in Omaha. In a lot of ways, it just seemed like the next step.”

It is possible that the Wheelers will open a brick-and-mortar bookstore in a few years, said Wheeler, but for now, Dundee will continue to show up at local events and encourage the conversation around books and literature.

“The reason for doing it is to bring in the community and to have that presence there,” said Wheeler. “Whenever we travel we’ve learned that to find the cool neighborhoods, you go to the indie bookstore, and usually that neighborhood is pretty cool to hang out in. We love our neighborhood a lot so we wanted to add a bookstore to it.”

The Wheelers will be promoting Dundee using Facebook, Twitter, and Instagram as well as their Tumblr-based website, said Wheeler. The Dundee Book Company’s IndieCommerce site, which will also have books on sale, will likely be up this week.