Talking Leaves Books began as a cooperative in Buffalo, New York, in 1975, when residents pooled their money to buy their community bookstore. The store has since morphed into a corporation owned by just two of the original 30 members. But, today, as much as ever, the bookstore relies on memberships -- of a different sort -- for its growth.

The co-op's founders, mostly Buffalo teachers and grad students, pooled about $20,000 to buy what was then called Everyman's Book Store from its owner, who was selling the four-year-old store to relocate to New York City. "We decided the bookstore shouldn't fall into the wrong hands," said Jonathon Welch, one of the original 30, who now owns the store with his wife, Martha Russell.

Welch explained that Talking Leaves didn't quite fit the New York state legal structure for a co-op, and, over the years, founding members gradually left to pursue other interests. "We just ended up with it," he said. "Everyone else had gone on to other jobs, and my name was always on all of the papers. I guess I had sweat equity." Although Talking Leaves is no longer a co-op, it still maintains a version of the original membership program, which customers can join for a $5 fee. Members get 10 percent off purchases.

At another time during Talking Leaves' 30-plus years, Welch filed applications to turn Talking Leaves into a nonprofit, but found it didn't fit the IRS' rules for a 501(c)(3). (He had envisioned the store as a "full-fledged cultural institution" with an art gallery, movie theater, restaurant, etc.) Now, however, Talking Leaves follows a more typical business model with Welch and his wife as the sole owners.

The store's name, as its website explains, comes "from a recurrent conceptualization of books by peoples who were unfamiliar with print; book pages were seen as 'leaves' that 'talked,' imparting wisdom and knowledge and spirit (not 'data') in order to represent, expand, and preserve them."

Welch said that the original co-op members changed Everyman's Book Store to Everyone's Book Cooperative, then back to Everyman's again, before settling on Talking Leaves. The "man" of Everyman, he said, was problematic for two reasons: the exclusionary aspect of women was an impediment for a bookstore that had a strong women's studies component and whose owner/members considered it to be feminist. And "the weird flip side," said Welch: "We got lots of calls about our pornography collection, whether we had inflatable female dolls and the like. Best to leave all that behind, we thought." 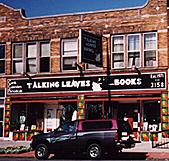 Now in a 1920s brick building, the store moved several times over the years, always within a few blocks. In 1994, it landed in its current 3,200-square-foot location, a few blocks from what was formerly the principal campus of the University of Buffalo and is now the medical, dental, and architecture schools. The moderately sized store stocks 80,000 titles. "People who've never been in here before often think we're a library," said Welch. "Almost every book is shelved spine out. We're the kind of store where people browse, not where they run in and pick up the nearest book from a display."

Welch explained that the store was founded "on the principle that the book business was moving [away from] small presses and serious fiction.... Our goal was to be a place where people go to find serious fiction, poetry, and political books. The books other bookstores weren't carrying." That philosophy, which has remained a constant, has "probably sustained us more than anything else," he said. "We've carved out a place."

Talking Leaves has in fact carved out two places: When Buffalo's Elmwood Village lost its last independent bookstore in the 1990s, residents begged Welch to open a store there. Elmwood Village has been the most stable area of the city in the past two or three decades, according to Welch. Still, it took him several years to be convinced by other local business owners and community members. In 2001, after he was offered a 2,200-square-foot space adjoining a coffee shop and a significant loan, he decided to open the second location, which is managed by long-time employee, Lucy Kogler. "I knew the amount of work it was going to take, and I wasn't sure I wanted to do it," said Welch. "But on balance it's been a wonderful thing and a great success. It would be very hard on that neighborhood and very hard on us if we were not there."

Running a business in a city that has had it renaissances and lulls over the years has been trying. When the university moved its main campus away from the original store, Talking Leaves watched foot traffic decline. The university's current president has promised to revitalize the area, said Welch. Buffalo's arts and literary community, however, which burgeoned in the 1960s, has maintained its vitality. Founding Talking Leaves "was our attempt to further that momentum," said Welch. "That energy sustained us and made the city a wonderful arts town. Everybody thinks [Buffalo] is a dying industrial city ... but it's also an incredible arts community with all kinds of support at the grassroots level, and we've certainly benefited from it." --Karen Schechner