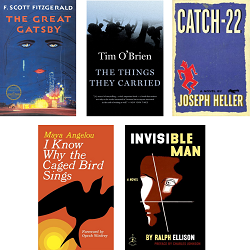 On April 22, the Matanuska-Susitna (Mat-Su) Borough School District in Palmer, Alaska, voted 5-2 to remove 5 of the 12 books on the reading list for 11th grade English classes. In response, the American Booksellers for Free Expression (ABFE) signed two letters, with the National Coalition Against Censorship (NCAC) and with the American Library Association’s Office for Intellectual Freedom (ALA OIF), condemning the school board’s decision and urging the school district board to reinstate the books.

The following books were removed from the curriculum:

In support of the removal, Mat-Su board member Jeff Taylor said, “We’ve got five books here that are labeled as controversial, and they’re controversial because of words like rape and incest and sexual references and language and things that are pretty serious problems, especially in our teenage world. Is there a reason that we include books that we even label as controversial in our curriculum? I would prefer that these were gone.” Taylor continued, “For us to put them in front of teenagers as part of our curriculum that’s just something I can’t, I just don't understand.”

Alaska state law already permits parents who object to specific books to opt to have their children read an alternative book. As stated in the NCAC letter, the “law ensures that individual parental objections — which can vary and affect a very large number of books — do not dictate what every student is permitted to learn.”

Although the school board voted to remove the books, there was dissent in the district. Two members of the board voted against the removal and Assistant Superintendent of Instruction Amy Spargo voiced her opposition. “The label of controversial is often in the eye of the beholder, and it would be hard to find books that aren’t labeled as controversial to somebody and these are the books that had literary value that were brought forward,” said Spargo.

“The next group of English electives that is coming actually contains the course that had the most public pushback for the controversial books on its list, and that was the Bible as history and literature, and we had more concerns about that being taught in our curriculum than any of the other books on this list. So again, I just put that out there as evidence that what makes something controversial is really subjective and that the books on these lists were chosen for their literary value,” Spargo said.

The ALA OIF’s letter noted that the Mat-Su school district is public agency bound by the U.S. Constitution and it “should strive to support academic freedom and students’ constitutional right to access a broad range of ideas, opinions, and viewpoints as part of their education, including those materials that some may find controversial or objectionable.”

The letter continued, “Allowing the personal beliefs of a vocal minority to determine what students can read and teachers can teach not only violates the language, spirit, and the intent of the First Amendment, but it also deprives Mat-Su’s students of the opportunity to benefit from the experience of reading award-winning literature, an educational and intellectual exercise that other students in high schools around the country will experience and benefit from as they continue with their careers and lives beyond the high school classroom.”

A motion to rescind the removal of the books is on the agenda for the Board’s Wednesday, May 6, meeting.