Grassroots Financing Is Underwriting a New Crop of Neighborhood Businesses

By Stacy Mitchell, Senior Researcher with the New Rules Project 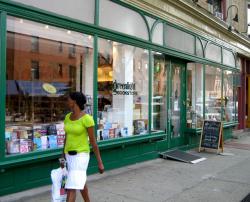 In the summer of 2008, business partners Jessica Stockton Bagnulo and Rebecca Fitting were making plans to open a bookstore in Brooklyn. Their chosen neighborhood, Fort Greene, was over the moon at the prospect. For years, residents had been clamoring for a bookstore, repeatedly citing it as their top need in surveys conducted by the neighborhood association.

Although Fitting and Bagnulo still had a long way to go — they hadn't found a space yet or secured financing for the venture — the Fort Greene Association decided to throw a party to welcome them to the neighborhood. More than 300 people came.

That was in mid-September. A week later, the financial crisis hit. Even before the meltdown, Bagnulo and Fitting knew that securing a bank loan for a start-up bookstore would be tough. Now it looked downright impossible.

The warm welcome from the neighborhood gave them idea, though. Bagnulo and Fitting reached out to people in the community and, over the next few months, raised $70,000 in more than two dozen small loans from their future customers. Combined with their own savings and a loan from the World Trade Center Small Business Recovery Fund, this gave them the $346,000 in capital they needed. Last October, they opened the Greenlight Bookstore on Fulton Street. The store has been a huge hit, with sales exceeding their projections.

Although no hard data exist, the number of businesses relying on their customers and neighbors for financing appears to be on the rise. Just as CSAs (community-supported agriculture operations) have played a key role in the rebirth of small-scale farms, so too may community-supported enterprises (CSEs) help seed a new generation of independent grocers, bookstores, and other neighborhood businesses.

This kind of grassroots financing can be a good deal for both parties, bringing together entrepreneurs who need affordable loans and savers who are dissatisfied with today's ultra low interest rates (and perhaps also fed up with investing in the stocks and bonds of big corporations).

While it's no substitute for having a robust local banking system, community financing can help fill in the gaps. It may be especially critical to bringing retail back to urban business districts and rural town centers. New research indicates that a growing number of people want to live within walking distance of neighborhood stores — a trend that could reduce household driving by 25-30 percent — but banks are often reluctant to finance such enterprises because of what they view as multiple risk factors: independent ownership, small store formats by retail industry standards, limited parking, and market areas with unconventional demographics.

Future customers may be better positioned to see the potential of these enterprises. That was certainly true for Greenlight. "It's traditional to go to friends and family. In our case, that included the neighborhood," says Bagnulo. She and Fitting set a minimum loan amount of $1,000 and allowed each person making a loan to choose his or her own interest rate of between 2 and 4 percent. This fall, one year after the store opened, Greenlight will begin paying the loans back in quarterly payments over a five-year period.

In a way, says Fitting, the financial collapse worked in their favor. "People were interested in investing in something that they could see and something that had real value," she explains. "What we were offering was as good [an interest rate] as anyone was offering at that time. But it was still a low interest rate for us to pay back compared to bank loans."

Community financing may not work for any type of business. So far, it seems most viable for the kinds of businesses that people have a strong emotional connection to: bookstores, food-related enterprises, and community gathering spots.

To launch Awaken Café, a coffeehouse and eatery in Oakland, Cortt Dunlap and his fellow owners pre-sold gift cards. Priced at $1,000, the cards could be redeemed for $1,250 once the café opened. It offered customers a great deal, but was still cheaper for the café than a loan, because the cards could be paid back with food and labor, rather than dollars.

One benefit of investing locally, says Dunlap, is that you are not trying to predict how the market at large will respond to a particular product - only how you and your neighbors will. Another benefit of community financing is that it helps a new businesses build buzz. "Those customers [who purchased cards] found themselves committed to our success," Dunlap says. "They had an incentive to tell people and invite their friends to come in."

Community financing has also taken off in rural areas. Claire's Restaurant, which anchors downtown Hardwick, Vermont, and sources over 80 percent of its food from farms within 15 miles, is the product of two distinct community enterprises. One, the Hardwick Restaurant Group, which raised capital from about a dozen local investors, secured a 12-year lease on a downtown space and paid for the equipment and build-out for a restaurant.

The other venture, Claire's Restaurant, was financed by a much larger group of residents. Half of the $100,000 in capital needed to start the business came from about a dozen families who made $5,000 loans at 5 percent interest. The other half came from more than 100 local families who purchased a subscription to the future restaurant. These $1,000 subscriptions (some of which were shared among multiple families) are being redeemed at the rate of $25 per month for 10 months each year for the restaurant's first four years.

The idea of separating the real estate from the restaurant came from the Preservation Trust of Vermont, which has provided assistance to community supported enterprises throughout the state. The structure has two benefits, according to Linda Ramsdell, who owns the Galaxy Bookshop in Hardwick and has been a leader in the venture. "Hopefully it will be Claire's forever, but if something happened with the restaurant, everything would be in place to bring in another restaurant," she explains. "Also, Claire's starting out does not have a lot of the debt that a restaurant usually has."

Claire's, which opened just over two years ago, has exceeded its founders' projections, though it still has a ways to go before it's profitable. "Part of the mission of the restaurant is to support all of those producers," says Ramsdell. "So we are trying to make the margin work between the higher cost of goods and keeping the prices affordable — so farmers can come in and eat their own food."

Community financing does raise significant legal issues, according to Jenny Kassan, an attorney with the Katovich Law Group and co-founder of Cutting Edge Capital. "The minute that you solicit anything like a loan or an investment vehicle where someone is being promised profits, securities law kicks in," she says. Most of these ventures are happening within the boundaries of a single state so they fall under state law, rather than federal regulations. But state law varies widely. "There are some states where it is quite easy and others where it is quite impossible," Kassan says.

One way to reduce compliance issues is to limit the offer to people you know.  "We didn't put the offer out there to everyone in the world," says Greenlight's Bagnulo, who vetted their financing plan with a lawyer and only reached out to people they had met who had expressed strong interest in the bookstore. "This was really a slight extension of the 'friends and family' loans that many small businesses do."

Another approach is to stick with prepaid gift cards. "That way you do not have to worry about securities law, because you are selling something that has an intrinsic value as opposed to an investment," says Kassan.

Gift cards are being used not only to finance start-up businesses, but, increasingly, to pay for expansion. After being turned away by a bank earlier this year, David Edwards emailed the 3,800 customers on his newsletter list and, in just two days, raised the $10,000 he needed to expand New Mexico Tea Co., a four-year-old tea shop in Albuquerque. Most came in the form of gift cards that could be redeemed for slightly more than their cost.

Asking the community for support often yields unexpected dividends. When Dandelion Café in Orlando asked customers to help them get through a low cash-flow period last year, two local businesses stepped forward and volunteered to remodel parts of the café as a show of mutual support and a way to advertise their services to the community.

Greenlight had a similar experience. Neighbors not only offered loans, but many volunteered to stain shelves, unpack boxes, and paint in the days leading up to the store's opening. "It was like a barn-raising," recalls Bagnulo. The end result is a bookstore that, although less than a year old, already has the feel of a beloved institution deeply rooted in its neighborhood.

Stacy Mitchell is a senior researcher with the New Rules Project and author of Big-Box Swindle: The True Cost of Mega-Retailers and the Fight for America’s Independent Businesses.

This article was originally published in Grist. The New Rules Project invites readers to sign-up to get stories like this delivered once a month to their inboxes. Sign up now.