Greenlight Bookstore, which opened in Fort Greene, Brooklyn, in 2009 with the help of loans from community members, is now venturing into the neighborhood of Prospect Lefferts Gardens, and owners Rebecca Fitting and Jessica Stockton Bagnulo are again seeking start-up capital under the store’s Community Lenders program. 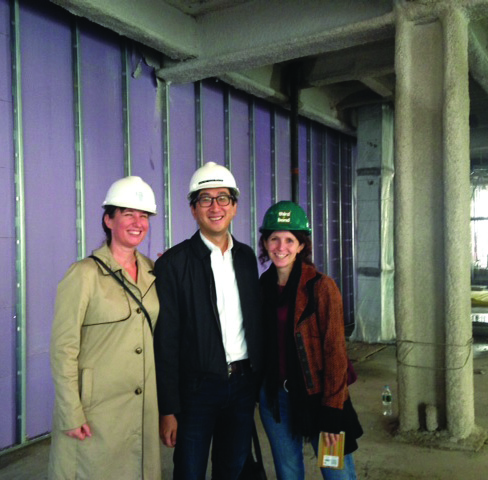 “The first time around, we had years of industry experience but we didn’t have business experience, so we had to work extra hard to get a business loan and lines of credit. The Community Lenders program was an alternative way to raise funds,” said Fitting. “What we figured out along the way — which was a pleasant surprise — was that it also gave people a chance to invest emotionally in the store. That was a beautiful thing.”

Lenders, including Greenlight’s community of neighbors, friends, and other supporters, can offer loans of $1,000 or more to the bookstore, which will repay the loans, with interest, in quarterly payments over five years, starting on the first anniversary of the store’s opening date. During the life of the loan, lenders get a 30 percent discount, the same as the store’s employees, online or at the Fort Greene or Prospect Lefferts Gardens locations. The deadline to become a community lender is June 1.

Fitting and Stockton Bagnulo have not made changes to the lending program that was established for the Fort Greene store other than to reflect current interest rates. “The program that we offered the first time around was a good and solid program,” which, after much research, was modeled on an upstate food cooperative, said Fitting.

The Community Lenders program has worked well for Greenlight, and Stockton Bagnulo said it’s something that current and prospective bookstores should consider exploring because of the immense connection it creates between a bookstore and its lenders.

There are elements to be mindful of — including state laws governing loans and public offerings — so Fitting and Stockton Bagnulo used the help of a lawyer to ensure they stayed within regulations. “It’s more time-consuming than one small business loan, but it seems so worth it in terms of the community investment in this place,” said Stockton Bagnulo.

Fitting agreed. “Administratively, it’s a lot to navigate, but it’s worth it. We have this loyal group of people who talk about our store — we’re part of their story and they’re part of our story. We’re talked about at their dinner tables and at their holidays, and they bring friends and family to come visit the store.”

Between its own outreach to community members and the resulting news coverage, Greenlight has already heard from more than 100 people who have expressed interest in knowing more about the Community Lenders program for its Prospect Lefferts Gardens location. Fitting and Stockton Bagnulo estimate that they currently have 30 commitments, amounting to more than $80,000 in loans. For Greenlight’s first location, they earned $76,000 in loans from 24 lenders.

“Some of them are repeat lenders from Fort Greene,” noted Fitting. “They don’t have any reason to do it again except that they believe in what we’re doing and that we’ll be successful.”

There is a lot of loyalty already evident in Prospect Lefferts Gardens, which is an up-and-coming neighborhood bordering part of the east side of Brooklyn’s Prospect Park. “It matters to people that we are local, and it matters to them that they shop at local businesses. Offering a chance to build this neighborhood means a lot to the people who live there. They feel like they’re a part of building this,” said Stockton Bagnulo.

The new store is projected to open in late summer or early fall. Working with architect Frederick Tang of Davies Tang + Toews, the designer of the Fort Greene store, Fitting and Stockton Bagnulo are envisioning a shop that echoes the first, but bursts with its own personality.

The 2,100-square-foot location on Flatbush Avenue is new construction. It also has a 600-square-foot finished basement that will be used to relieve crowding in the Fort Greene store’s back office, which now serves as the staging area for Greenlight’s growing offsite business arm.

“Our offsite sales are such a huge area of growth for us that we really have outgrown our space,” said Stockton Bagnulo. Greenlight operates two kiosks at the Brooklyn Academy of Music and also provides book sales for offsite conferences, book launches, and school book fairs and author visits. “Clearly there’s a need for books all over the city. There’s still a lot of room for growth,” said Stockton Bagnulo.

Prospect Lefferts Gardens is populated by families seeking more space than offered in areas closer to Manhattan, plus the ample green space provided by the park. It offers a lot of parallels to Fort Greene, both in terms of its proliferation of arts organizations and the abundance of young families, but it also has a substantial Caribbean population, something the owners hope to reflect in the store’s selection of eclectic, literary titles.

“We’re trying to be very mindful of the existing neighborhood culture and bring the kind of bookstore this neighborhood needs,” said Stockton Bagnulo.

Fitting has lived in the neighborhood on and off since she moved to New York and now owns an apartment there. She sees Greenlight’s second location as filling a need for both the nearby residents and for many of the neighborhoods lying beyond Prospect Lefferts Gardens. “It’s an amenity that isn’t there,” she said.