Amazon Books, the online mega-retailer’s chain of physical stores, currently has 15 locations, with three more slated to open, but how are independent bookstores located near these Amazon Books stores doing now, more than two years after the first store opened in Seattle? 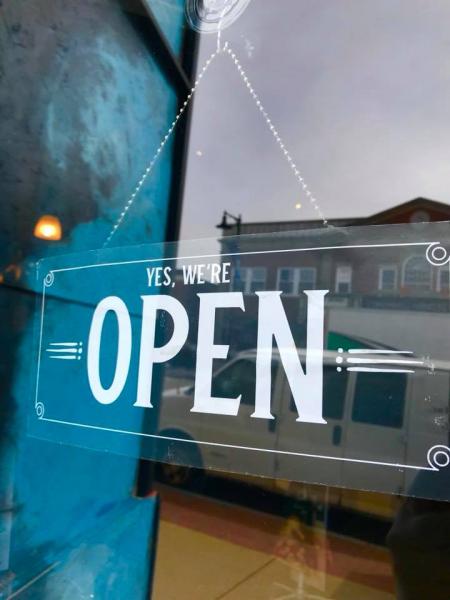 To find the answer, Bookselling This Week caught up with booksellers at four ABA member bookstores in cities where Amazon has opened bookstores, many of which are located in high-traffic shopping centers, to ask how business was faring.

Peter H. Reynolds, children’s book author and owner of The Blue Bunny Books & Toys, said his store is located about a mile away from one of Amazon’s bricks-and-mortar bookshops, which opened in Dedham, Massachusetts, a suburb of Boston, in February 2017.

“At first I was dismayed, but, as time went on, I grew more confident as our sales actually increased,” said Reynolds. “That might have been due to the fact that we added a café. I’d love to say that adding the café was a strategic response to Amazon moving in, but it turns out that it was just a smart move. All businesses have to adapt. Our customers were actually more alarmed than we were about Amazon, resulting in those loyal customers becoming even more fiercely loyal.”

When it comes to lasting long-term effects, Reynolds said he thinks there will continue to be room for indie retail stores with a less commercial and chain-like vibe; however, it is worrying to see human habits change as technology keeps making it easier and more tempting to never leave the house.

“As long as we can get people out and about,” he said, “we [indie bookstores] stand a chance of getting them into the store to shop.”

In addition to Dedham, Amazon Books stores are in Portland, Oregon; New York City; Washington, D.C.; and several other major cities, as well as in a number of locations in California, including Walnut Creek, San Jose, Los Angeles, and La Jolla, where the second-ever Amazon Books location opened at the Westfield UTC shopping center in September 2016.

La Jolla, a community in San Diego, is also home to Warwick’s. Adrian Newell, the store’s book buyer, said she visited Amazon Books when it first opened and saw a  selection of stock consisting mostly of top-sellers on the site arranged in various displays.

“At first, I was concerned because they had a huge cookbook section — and we do really well with cookbooks and coffee table books — but it was just this odd mix of really old stuff, like these oddball paleo or vegan cookbooks, but it was stuff that was top-rated or most-wished-for on Amazon,” she said. “They had a few new things but not all the new things that I would expect them to have. It was just this weird mix.”

In Newell’s assessment, the Amazon store’s inventory lacked depth, and the store’s primary function appeared to be not so much to sell books as to function as a showroom for Amazon’s electronic devices and to sign up customers for the Amazon’s Prime subscription service, which offers free two-day-shipping and deep discounts. At Amazon Books locations, non-Prime customers pay full price for a book, while titles are sold to Prime customers at the Amazon web price.

Over time, however, she believes this strategy makes the store less of a draw for customers than a highly curated indie. In addition, said Newell, the shopping center recently completed an expansion that has resulted in the store’s former neighbors, Apple and Tesla, moving to a more vibrant part of the complex.

“I don’t really think the store has hurt us. It’s siphoned off some of our bestseller sales, but I don’t think it’s a destination. It’s a convenience thing,” she said. “For me, the bigger issue is that we are a same-day delivery city now for Amazon [online orders], and we have been for over a year, and I feel like this year at the holidays we finally felt that more than anything else.”

In previous years, Newell said, Warwick’s has been very busy the last three days before Christmas because, historically, people didn’t completely trust that they would get the gifts they ordered online in time.

“Now you can order something in the morning and get it that afternoon. That’s huge,” Newell said. “We used to say we could special-order a book and get it as quickly or even faster than you could online, but we can’t say that anymore.”

Robert Sindelar, ABA Board president and owner of Third Place Books, which has three locations in Washington State, said his store saw flat holiday sales following an up year after the first Amazon Books location opened in Seattle, in November 2015. Since then, sales have resumed a normal rate of growth. More than two years later, said Sindelar, the Amazon store is far less of a factor.

“When it opened, it got a lot of attention and press coverage, especially since it was the first one. I wasn’t happy about it, but mainly because it was another bookstore opening a mile-and-a-half from our Ravenna store. It was less to do with who it was than with that proximity; obviously, we were going to share customers,” said Sindelar.

The store opened in University Village, one of the highest-traffic shopping centers in the region, Sindelar said, so the idea that it wouldn’t somehow affect Third Place’s sales would be somewhat naïve. He noted the store did take a hit in the sense that it seemed to slow their growth for a short period right after the opening.

“The following year our sales were softer than our trends had been in the past in terms of growth,” said Sindelar. “Sales were basically flat for all of 2016 at the Ravenna store, but then we were up significantly for the holiday season. And then in 2017 we saw sales grow consistently throughout the year.”

Lynn Mooney, co-owner of Women & Children First in Chicago, said that since the Chicago Amazon Books location opened in March 2017, the direct effect on store sales has been fairly small. They have been fortunate, said Mooney, due to some of the strengths they have over Amazon Books.

“We do have a significant number of very loyal customers, and I think many of them, on principle, did not go to the Amazon store and have no intention to,” she said. “We’re also a specialty bookstore, so many of the people who come to us do so knowing that we’re going to be especially deep and strong in certain areas that are important to them. A third reason is that customers who shop in indie bookstores appreciate the kind of curation of stock that happens and the discovery of titles that aren’t bestsellers.”

According to Mooney, Chicago stores banded together upon hearing the news that Amazon was planning to open a physical location, creating the Chicagoland Independent Bookstore Alliance, or CHIBA, which continues to work on programming and outreach to media, elected officials, and consumers.

“At the beginning, we were split on whether to engage in negative messaging about Amazon,” said Mooney. “Initially we did both, but we saw there are other organizations better set up to do that, though we’re happy to rebroadcast any work they do.”

But Mooney told Bookselling This Week that any foot traffic their store may possibly be losing to Amazon Books is the least of the damage being done, especially when one sees how the online retailer’s dominance perpetuates the idea in consumers’ minds that “Amazon equals books.”

“Any time that message is reinforced, it damages the [bookselling and publishing] ecosystem,” she said. “That hurts all of us.”

See this week’s announcement about a new report from ABA and Civic Economics, Prime Numbers: Amazon and American Communities, which reveals the continuing — and increasing — loss of jobs and essential state and municipal revenue as a result of the growing retail dominance of Amazon.