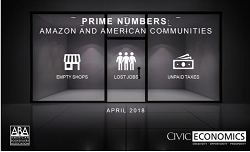 A new report from the American Booksellers Association (ABA) and Civic Economics reveals the continuing — and increasing — loss of jobs and essential state and municipal revenue as a result of the growing retail dominance of Amazon.com. The report documents both Amazon’s sales and, for the first time, the explosive growth of sales through its third-party Marketplace from 2014 to 2016. And the report makes clear that Amazon’s sales tax avoidance strategy has continued despite well-publicized agreements with American states.

“This important new study reaffirms ABA’s commitment to document the growing negative impact Amazon has on the overall U.S. economy,” said ABA CEO Oren Teicher. “It makes clear that while Main Street retailers won a significant victory when Amazon began collecting sales tax, the accelerating growth of its third-party sellers has continued to rob cities and towns of needed sales tax revenue. This shortfall cuts the revenue necessary for schools, first responders, and infrastructure, and continues the shift of billions of dollars of retail away from Main Street, causing a staggering loss of jobs to the U.S. economy.”

Prime Numbers: Amazon and American Communities, released by ABA on April 4, 2018, paints a comprehensive picture of Amazon’s impact at the state and national level.

Civic Economics estimates that Amazon’s total retail sales in the U.S. in 2016 (the most recent figures available), including third-party merchants, exceeded $130 billion. Those sales represent 44,000 empty storefronts and 637,000 displaced retail workers, only minimally offset by Amazon’s employment in distribution facilities.

Marketplace sales grew from 46 percent of Amazon’s retail sales in the U.S. in 2014 to 56 percent in 2016, more than doubling in volume over the same period. Amazon’s direct sales grew at a much slower pace, resulting in a significant shift toward third-party sellers, which are left to their own discretion to decide whether and where to remit sales taxes.

Moreover, a recent report from the federal General Accounting Office estimates that such third-party online sellers “likely collect and remit between 14 percent and 33 percent of potential sales taxes to state and local authorities.” Based on that range, Prime Numbers estimates the total uncollected state and local sales taxes in 2016 at as much as $5 billion, resulting in shortfalls that leave states, cities, and towns scrambling to fund schools, first responders, infrastructure, and other services.

The growth of online sales in general and Amazon in particular has had a visible impact on American communities, exhibited by the much-discussed “retail apocalypse” as retail activity increasingly moves from commercial districts to industrial parks.

“Online retail is a fundamental reality of the 21st century, but advances in technology don’t eliminate the fact that all businesses should be competing on an even playing field, and that elected officials must ensure that local businesses — which do much more to sustain a community’s long-term economic health — get the same resources and benefits given to large corporate retailers,” added Teicher.

ABA and Civic Economics have made the full Prime Numbers report available online at www.CivicEconomics.com/primenumbers.html. Detailed information is also available for each state and the District of Columbia, allowing readers and policymakers to see for themselves how their community is affected.

Booksellers are encouraged to share this report with their customers, neighboring businesses, area shop-local organizations, and local officials. Booksellers can visit the New Localism Toolkit in BookWeb’s Designs & Downloads for sample social media posts and an updated infographic showing how Amazon impacts Americans and their communities. State-specific letter templates that booksellers can send to legislators are available in the Antitrust Action Kit on BookWeb.