Indie Next List “Years of Discovery” Campaign to Begin in May

From its inception in 1999 as the “Book Sense 76,” to the current 20-title version — drawn from bookseller-recommended handsells — the monthly Indie Next List (INL) has epitomized the heart and soul of passionate bookselling: Discovery of the next great read and next undiscovered gem.

ABA will commemorate the years of discovery that the INL ushered in with a refresh of the monthly printed flier, bookseller incentives, customer contests, and a capping celebratory INL author session at Winter Institute 2017 (Wi12) in Minneapolis. 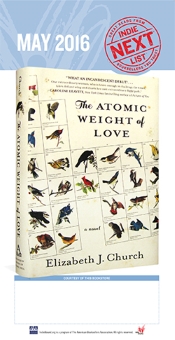 Booksellers will notice two important improvements beginning with the June 2016 adult INL flier: The first page includes a box meant for the store stamp, to make co-branding the INL with your business very easy. The list will also include three additional “Now in Paperback” titles, for a total of nine.

The June INL will also include a contest for your customers. Separate contests will run in the July and August fliers. You are encouraged to display the INL flier prominently, use it as a bag stuffer, and distribute it at events so that many of your customers will have a chance to win, courtesy of your store. Full rules and details will be published in next week’s BTW.

Stores that create a monthly INL display for titles appearing on the May, June, July, August, and September lists and post a photo each month to Facebook, Twitter, and/or Instagram will automatically be entitled to bring one additional person to Wi12 above the standard three booksellers per company max.

From the qualifying stores, 10 will be chosen to win a complimentary registration fee to Wi12. ($99 fee, subject to increase.)

Eligibility and entry requirements are as follows:

Details about the INL author session at Wi12 will be announced in the coming months. Revisit & Rediscover authors are expected to appear at the Winter Institute Backlist Book Swap Party.

Questions about the display contest and social media entries should be addressed to ABA Social Media Manager Catherine Cusick.

Questions about the INL Years of Discovery Campaign should be addressed to Senior Program Officer Joy Dallanegra-Sanger or Development Officer Mark Nichols.