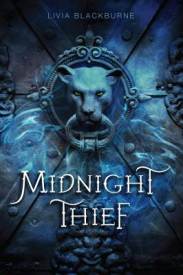 Livia Blackburne is the author of Midnight Thief (Disney-Hyperion), a Summer/Fall 2014 New Voices pick for young adults. Blackburne was born in Taiwan and raised in Albuquerque, New Mexico. She has a Ph.D. in neuroscience from MIT, where she conducted research on the neural correlates of reading. Blackburne lives with her husband in Los Angeles, where she is hard at work on her next novel and continues to blog on the intersection of writing and brain science.

At first adversaries, Kyra, a thief living on the streets of Forge, and Tristam, a palace knight bent on revenge for the killing of his best friend, join forces in Blackburne’s homage to medieval fantasies. Emily Ring of Inklings Bookshop in Yakima, Washington, described Midnight Thief as “tightly written, with a perfect mix of romance, peril, and mystery.”

What inspired you to write Midnight Thief?

Livia Blackburne: The story goes back to when I was in high school. I went to one of those quirky independent schools where there was a yearly camping requirement for graduation. I hated camping, so after a few grueling one-week trips with no flush toilets or running water, I started scheming to avoid the requirement.

It turned out that you could propose your own project instead of camping, so I proposed to write a novel, and to my surprise, they accepted my proposal. I wrote about 40 pages of a medieval fantasy in 10th grade, and then reworked it for my 12th grade senior project, this time getting to 60 or 80 pages. It was a story about a young thief who finds that she has magical powers, and it was not very well written at all. But one of my mentors for the project made an important observation, which was that the main character’s best friend, Kyra, had the most personality out of the entire cast. Then I graduated and stopped reading and writing fiction for about 10 years while I pursued a science career.

Fast-forward many years to grad school. I was taking a class at Harvard Medical School and often waited in the bookstore for the bus because it was cold outside. One day, they had a table display featuring a certain popular YA paranormal romance about a girl and a vegetarian vampire. I was hooked before the bus came, and read the entire series over a weekend. That reminded me just how much I loved writing and YA literature. So I took out my old character Kyra and built a novel around her.

How has Tamora Pierce influenced your reading and writing?

LB: I grew up loving Pierce’s Song of the Lioness series, and I’ve lost track of how many times I’ve read the books. Midnight Thief is an homage to that girl power fantasy tradition. And in many ways, I think Kyra resembles Pierce’s Alanna. Both girls are highly skilled in their physical abilities, but unsure in their identity and in love. Thankfully, both heroines also have good friends to help them through the challenges they face.

What is your favorite fantasy series, currently? Do you think fantasy deserves more respect than it sometimes gets from the book world?

LB: I absolutely adore Megan Whalen Turner’s Queen’s Thief series. The characterization and the plotting are just so brilliant, especially in The Queen of Attolia and The King of Attolia.

I think fantasy has come a long way in the book world. J.K. Rowling legitimized both fantasy and YA fantasy as good-quality literature, and more recently George R.R. Martin has proven that fantasy can have a strong mainstream draw. So I think things are headed in a good direction. I suppose there will always be those who turn up their noses in favor of “real literature,” but I’m pretty sure if you put those people in a cagefight with Game of Thrones fans, the GoT crowd would win.

What are your thoughts on diversity in books?

LB: I see it like this: We read books to experience other worlds, other ideas, and other lives. And we’d be doing ourselves a disservice if we only had books that were written by people in a narrow subset of cultures and worldviews.

Will there be a sequel to Midnight Thief?

LB: Yes! That’s what the keyboard marks on my forehead are from! In Book 2, Kyra will further explore her identity and her past, wrestling with where to place her loyalties as the conflict between Forge and the Demon Riders deepens.

What has been your favorite part of the publishing experience so far?

LB: It’s been magical simply to have people read and respond to my work. A book isn’t a static thing. You have my words and what I put into it, but when you pass it on to readers, they see it through the lens of their own experience. I love hearing from readers and getting their perspective on my characters and their stories.

What advice would you give a young adult interested in writing?

LB: Read a lot, write a lot, and find critique partners that you trust. There really is no shortcut.

If you were a bookseller, is there a book you would say YA readers just have to read?

LB: I’ll say the Queen’s Thief again, and besides the general amazingness of the story, I’ll give one more slightly quirky reason, which is that it is one of the few modern YA series that’s written in a shallow omniscient viewpoint. I feel like YA has settled a bit too comfortably into a certain writing style with deep points of view that are very firmly in one character’s head. And there’s nothing wrong with that — Midnight Thief is written in that style as well. But I think there is room for other types of voices as well, and I think Turner’s work is one good example of that.

If you were stranded on a deserted island, what three titles would you want to have with you?

LB: I’ve already mentioned Turner and Pierce, so I’ll pick some new ones for this question. I’d say The Lies of Locke Lamora by Scott Lynch, Cinder by Marissa Meyer, and Graceling by Kristen Cashore. I was tempted to bring Plain Kate by Erin Bow as well, but that might be too depressing for a deserted island.