Alejandra Algorta is the author of Neverforgotten, a Summer/Fall 2021 Indies Introduce middle grade selection and November/December 2021 Kids’ Next List pick. 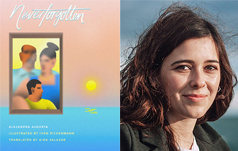 Cat Chapman of The Oxford Exchange in Tampa, Florida, served on the panel that selected Algorta’s book for Indies Introduce. She said, “In Neverforgotten, Fabio suddenly forgets how to ride his bike. Awestruck, he hides away — but with the help of his neighbors and friends, he slowly but surely returns to the streets of Bogotá. Algorta perfectly captures how children are able to make myths of the everyday, woven from both the truths and tall tales of the adults around them and their own organic perception of the magic in the world around them. This book was utterly gorgeous and felt like a faraway memory.”

Algorta is a writer and editor from Bogotá, Colombia, and founded the poetry publishing house, Cardumen.

Cat Chapman: The story in Neverforgotten is a direct example of the way children are able to create myths of the everyday. Was there an experience in your childhood that you remember being more magic than others?

Alejandra Algorta: My childhood was pretty magical, or at least I remember it that way. In part, I think this is because I always believed that there was a deeper explanation (more exciting, perhaps even more literary) than the one that adults used to give me to explain everyday life. But what is everyday life, anyway?

When I was a child there was an energy crisis in Colombia and for a couple of years there was energy rationing in Bogotá. I remember that when the lights went out, my dad would take his guitar and sing with us for hours. The moment when there was no light was the moment when my dad would play and sing, and that's how it was throughout my whole childhood. Only as an adult did I understand that this gift from my father was actually due to a climatic phenomenon called El Niño, which brought droughts and misfortune to many and also brought many songs to my home.

Today, more than ever, we humans are facing the consequences of the climate crisis, a crisis in which I am still sure we can prevent much suffering from through action. I also believe that within small gestures, like singing in the dark, hides the magic with which we can realize that all we need is less. What we need is each other, keeping company in the dark and remembering what is important. The world has infinite potential to be magical, I think it is in the minds of children where it becomes mythical.

CC: There are vignettes of Bogotá (illustrated by Iván Rickenmann) throughout the book. How were the places chosen? Are any of the illustrations of a place special to you?

AA: Ivan chose those places by taking long walks through Bogotá. It was he with his magical gaze who found and composed Fabio's neighborhood. He ventured to the south side of the city and oddly enough I had described Fabio's neighborhood as inspired by the northern end of the city. ​​My favorite drawing is undoubtedly the image that closes the book, because it gives a different ending to the story. I dare say that the image with which Ivan closes the book mends the end of the novel, heals it.

CC: What was it like to translate the book with Aida Salazar and Levine Querido?

AA: For me it was a great privilege. Being translated (or rewritten) by anyone is a great honor for any author, I was lucky enough to be translated by a poet. Aida Salazar was so generous and creative. The Levine Querido team did an impeccable job and were especially resourceful in translating phrases that could have multiple meanings or that showed cultural gaps.

CC: I really liked that even though his perception of the world is his own, Fabio relies on the advice and stories of the adults around him to understand and contextualize it — which, combined, creates a world that is magical and poetic as well as what some of the other Indies Introduce panelists and I found evocative of magical realism. Did you intend for this story to fall under magical realism, or did your writing style simply lend itself that way? Especially as a Latin American author, or as a poet, what is your relationship to magical realism as a genre?

AA: It was never my intention, however I can say that I grew up believing that, more than an artistic movement, magical realism was a way in which Colombians faced reality. The way we decide to see it, explain it, deny it, redraw it, live it. I also believe magical realism works as a survival mechanism against the inequalities and injustices that Latin Americans have historically experienced. I don't think my writing can be separated from that desire to find magic in the absurd, in the wonderfully real and cruel Latin American absurdity.

CC: There are so many moments in the book in which not only Fabio, but also the reader, have to infer what has happened or why, even when it's inexplicable. How do you approach that state of the unknown?

AA: I think uncertainty is a very important state that we must all learn to live with. We know very little, almost nothing. I would like everything I write to respect and accept the uncertainties of my reality. In the case of Neverforgotten, the unknown ends up being the most comfortable and safe place in which Fabio can be mentally, because it is a place where there are no lies. The place where his perception becomes open, magical, kind, and generous.

Several readers, especially young ones, have asked me about the end of the book, as if I had a written secret that I had left out of the story. The truth is that the novel is written from Fabio's perspective with the tools Fabio has to process reality. I don't think I know more than him and (spoiler alert) no, he didn't tell me where he was going.

AA: I love them! They look and feel and taste like home.