Alexis Schaitkin is the author of Saint X, a Winter/Spring 2020 Indies Introduce debut and a March 2020 Indie Next List pick.

“On a winter break vacation with her family, Alison, an 18-year-old college freshman, goes missing — only to turn up dead several days later,” says Indies Introduce bookseller panelist Cary Shapiro, a bookseller at Plot Twist Bookstore in Ankeny, Iowa, until its recent closing. “The mystery is never solved, and the family attempts to go on with their lives. Years later, Claire, Alison’s younger sister, is living in New York City when a chance encounter draws her back into that fatal vacation. Desperate to find the truth, Claire obsessively stalks a man once connected with her sister’s death. A combination murder mystery/coming-of-age story, Saint X is filled with twists, turns, and foreshadowing.”

Schaitkin, who currently lives in Williamstown, Massachusetts, is a Henry Hoyns Fellow at the University of Virginia, where she earned her MFA in fiction. Her work has been published in Ecotone, Southwest Review, The Southern Review, The New York Times, The Best American Short Stories, and The Best American Nonrequired Reading.

Here, Shapiro and Schaitkin discuss the author’s early love of atmospheric books, and how that and other life experiences influenced her debut novel.

Cary Shapiro: Let’s start with an easy one. Growing up, who were some of your favorite authors, and who do you like to read now? How did they influence you as a writer? 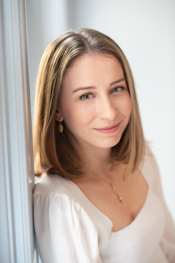 Alexis Shaitkin: I’m going to start way back, with picture books. As a little kid, I was into really aesthetic books with a sense of magic or mystery. Some of my favorites were Grandfather Twilight by Barbara Berger, Fox’s Dream by Keizaburo Tejima, Tar Beach by Faith Ringgold, and The Snowman by Raymond Briggs. I read these books to our toddler now, and I’m amazed at how these rather elliptical stories draw a young child in.

As a young reader, I loved Tuck Everlasting, Fog Magic, and Ruth Chew novels. Again, lots of mystery and atmosphere. I guess I always liked being unsettled? Rebecca rocked my world in middle school. I think you can see traces of these early reading attractions in Saint X — in its mystery, in the way Alison continues to haunt those who knew her, and in the atmosphere of the endless winter Claire and Clive spend together.

As an adult, writers whose bodies of work I am always returning to and steadily making my way through include Kazuo Ishiguro, Toni Morrison, Philip Roth, and Shirley Jackson. Lately, I’ve been reading Nicole Dennis-Benn, Garth Greenwell, and Laura van den Berg.

I know some writers find they can’t read fiction while they’re working on a novel, but I’m the opposite. If I’m not reading, I quickly forget how to write a coherent sentence. I do tend to stick to books that aren’t too tonally dissimilar from what I’m writing; it’s hard for me to toggle between reading biting social satire and writing something meditative or introspective, for example.

CS: Several times in the novel you have a chapter that uses an alternative voice, one that is in first person and is a character in the novel. Why did you slip those voices in? How important are they to the telling of the story?

AS: From the very beginning of writing this book, I knew it was largely about aftermath, about the what happens next of a tragic story that becomes a media sensation and public obsession. Yet it took a while to land on the structure that would best deliver a sense of the wreckage Alison’s death left behind. I was many drafts in before I decided to intersperse a series of first-person testimonies from seemingly peripheral characters — a police officer, a resort guest, Clive and Edwin’s schoolmates, Alison’s high school teacher and her ex-boyfriend. It was in writing these pieces, in letting these voices briefly claim the reader’s attention, that the novel started to feel complete. For me, this chorus of voices is about the ripple effect of Alison’s death, about its unexpected consequences and the ways a single event can reverberate across time and space.

CS: When I read Saint X, it felt like a cross between a true crime novel, a coming-of-age novel and a primer on how to be a stalker in New York City. How would you categorize this book?

AS: I think all of those ring true. I’d probably describe it as a domestic drama propelled by a mystery. Or I might say, it’s a novel with a mysterious murder at its center that’s not a murder mystery.

I love the experience of reading a book that shifts beneath my feet; just when I think I know what it is, it surprises me. That’s some of what I was trying to achieve in Saint X. The first chapter sets up the mystery of Alison Thomas’ death, but I hope the reader will quickly figure out that the novel is ultimately less interested in the answer to that mystery than in its fallout for all of these characters.

CS: I read several of your early short stories (“Never Ending Beauty” and “A Dream Deferred”). How did the experiences of your early writing influence Saint X? How has your writing process changed over the years, going from short stories to your first novel?

AS: The two pieces you mentioned are both set in northern Thailand; I spent a year working as an English teacher at a college in Chiang Mai after I graduated from college. Thematically, the clear connection to Saint X is an interest in tourism, which has long been a preoccupation of mine. In Chiang Mai, I worked mostly in a hospitality school, teaching English to students who were preparing for jobs at hotels and as tour guides. I also once spent a summer working at a tourist attraction, as a gardener at the Monet Gardens in Giverny, France, an experience that brought me behind the scenes of a place designed to be a kind of visual paradise. All of those experiences, I think, contributed to my interest in looking at, and beneath the surface of, spaces created for the tourist gaze.

In terms of going from stories to a novel, writing short stories and writing novels are such distinct challenges. The things that make a story work and the things that make a novel work are completely different, and sometimes at odds with each other. Stories can support so much more ambiguity, and they don’t demand resolution — I really love a short story whose ending gives me the sense that the world continues on, and I as the reader have simply been nudged back out. Whereas I think so much of what makes a novel satisfying is a sense of recurrence, of circling back, characters resurfacing, unexpected parallels slowly emerging. In a way I think it’s structure and form, as much as plot, that keeps a novel from being “just a bunch of stuff that happens.”

CS: What are you currently working on?

AS: My next novel. I’ll just say it’s very different from Saint X, though it shares some of that haunted tone and sense of mystery.

Find out more about the author at alexisschaitkin.com.