Annie Liontas is the author of Let Me Explain You (Scribner), a Summer/Fall 2015 Indies Introduce title and an August 2015 Indie Next List pick.

“Let Me Explain You opens with an e-mail message written by Stavros Stavros Mavrakis, Greek immigrant and restauranteur, to his three grown daughters and his ex-wife. He is dying, with just over a week left to live, he believes, and his e-mail message outlines how he wants these women’s lives to be better — if only they will follow his sage advice,” said Jamaica Richter of BookPeople of Moscow in Moscow, Idaho.

“From this concise and brilliant setup, the novel takes off with vivid, endearing characters and captures the tender complexity of relationships between parents, children, and siblings. With the quirkiness and humor of a light read combined with true depth of insight into relationships, this is a wonderful debut from a promising new writer.”

Annie Liontas is a graduate of Syracuse University’s MFA program and a writer of fiction and poetry. Since 2003, she has been dedicated to urban education, working with teachers and youth in Philadelphia, where she lives with her wife, and in Newark and Camden, New Jersey.

Stavros Stavros “Steve” Mavrakis is funny, unaware, and explosive. Where did the idea for his character come from? What is it that motivates such a big personality? 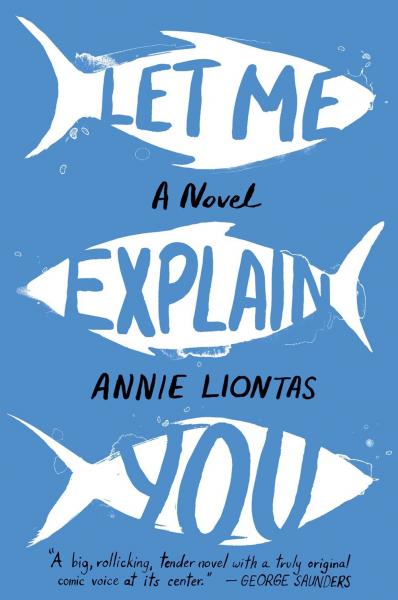 Annie Liontas: I grew up surrounded by stubborn and proud Greek patriarchs, and I always knew I had to make Stavros Stavros Mavrakis writ-large. Sure, he is in part inspired by my father, but he is also the Greek theos who visited during holidays and got loud and boastful. He is too big to be one man, really.  I’ve met other children of immigrants — other daughters, some as far away as Trinidad — and they recognize their father in him, too.

Once I understood the scope of his character, I began to map Stavros Stavros onto other dominating patriarchs, from King Lear to Artemio Cruz. (There is an undisputable lineage of narcissists in literature.) Stavros Stavros is a man who wants to make the world in his own image. In fact, because he is a narcissist, anything else is impossible — is painful and inexplicable. This may be why I have such sympathy for him.

The father-daughter dynamic in Let Me Explain You is difficult and complicated. What is it about Stavros that pushes his daughters away?

Stavros is a colonizing presence, and the daughters, to survive, must resist him. They must become resilient; they must envision an existence outside of this oppressive force or be crushed by it. Instinctively, they understand that in their father’s world-view, they cannot exist as full people, and so they must break away.

How did you come up with the book’s title?

AL: It was a surprise when it came to me. It helped me realize that I was finally finished writing the book. It also helped me convey to the reader that this novel is asking us to think through whose story this is, who gets to tell their story, how we often explain ourselves to one another and fail, how we try to explain others to themselves and fail, how explaining is simultaneously a way to conquer and resist. The phrase appears often in the novel, continuously changing based on what’s come before and whose mouth it comes out of. It demonstrates how power shifts from character to character and is never quite resolved, since the human entity is always changing, evolving, evading explication.

How has your work in urban education influenced your writing?

AL: Urban education is a calling, like writing. Much like writing, it requires adaptability, creativity, resilience, and grit. It asks that you be fully present to make any impact. That means these two vocations are often in opposition, since they each require so much time and investment. It’s a great internal battle for me — which deserves my attention more? It’s something I haven’t quite resolved.

My students inspire me to approach the world with curiosity and openness, something essential to writing. They’ve inherited a world that is just not good enough, and they know this in some ways, but they also are completely insistent on creating the world anew. They can smell you out if you’re fake or disingenuous, just as the reader can smell you out on the page.

My work with urban youth keeps me engaged, aware, and committed.

What has been the best (or strangest) experience you’ve had since learning your debut was being published?

AL: I love how people respond to the book and make it their own. My favorite so far has been food-inspired responses. Drinks with Nick created a cocktail named the Stavros Stavros, and Peck’s restaurant (as part of Greenlight Bookstore’s incredible Book/Plate series) built a whole menu inspired by the novel. The chef and I planned it together, drawing on some recipes in the book and others of his own creation. He makes a mean lamb sausage!

Mostly, I’m just so overwhelmed and grateful at people’s generosity and ingenuity.