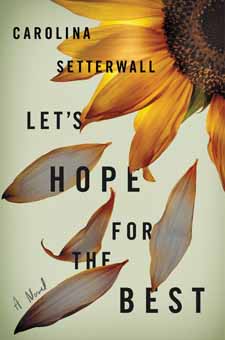 Carolina Setterwall is the author of Let’s Hope for the Best (Little, Brown and Company), a Summer/Fall 2019 Indies Introduce adult debut novel.

Setterwall’s fictionalized autobiography is “an absorbing narrative that alternates between the delights of falling in love and the excruciating grief of suddenly losing a spouse,” said Bradley Graham of Politics and Prose Bookstore in Washington, D.C., who served on the bookseller panel that selected the debut for the Indies Introduce program.

“Told in Carolina’s voice, the story tenderly and unsparingly conveys not only the intricate aspects of her romance with Aksel but also the many levels of mourning that came with finding herself widowed young and with a child and wondering if she might have contributed to her husband’s untimely passing. By shifting back and forth in time, the book gradually converges on a tragedy that’s already known, then extends toward an uncertain future filled with new love but also fresh questions,” said Graham.

Born in Sweden, Setterwall has studied media and communications in Uppsala, Stockholm, and London. She has worked within the music and publishing industries as an editor and writer. She currently lives in Stockholm with her son.

Bradley Graham: Your book is categorized as fiction, but reviewers have noted the story is largely autobiographical. How much of what’s in Let’s Hope for the Best actually happened? 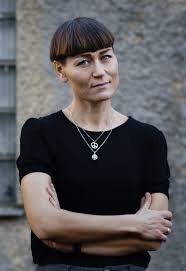 Carolina Setterwall: This is a really difficult question to answer, mainly because it’s a matter of truth, memories, and perspectives. While, indeed, it is true that I lost my partner under the same circumstances as are told in the book, Let’s Hope for the Best is still a fictionalized story, constructed as a novel rather than a biography. Most of the events that take place in the story took place in my real life, too, but not necessarily in the exact same way or in the exact same order. Therefore, I could and would never claim this story to be the “truth.” I’d go as far as to say it may be my version, my perspective, of events that took place in my real life, but it’s still a story.

BG: A principal feature of the book is alternating the story of falling in love with the story of grieving. Why did you decide on this double narrative structure?

CS: I wish I could say that there was a plan but, really, it was mostly coincidence. I actually tried to compose a story about a process of loss and grief that began the day the main character finds her partner dead in their shared bed one morning, but soon realized it was impossible. The grief couldn’t be separated from the love. The loss couldn’t be separated from the presence of the person who was gone. I think grief works that way, too.

I soon came to realize that after losing a person you love, it’s not only the person you lose. What you lose is a big part of your past, of a shared history, and also of your future. I wanted this story to be about a relationship as much as it was about the loss. To mix two timelines, one after and one before the event that changed everything, was a way to capture the way death changes things irreversibly for the people being left behind.

CS: Actually, no, it was quite the opposite. Writing about grief was all about documenting what was already there. I lived in, and through, the grief and in a strange way, all I had to do was to formulate it. The hard part was living my life and trying to navigate through the darkness, not writing about it.

The sections that hurt the most to write were actually the happier ones, like the parts about falling in love with the person I lost, because it seemed so distant and made such a grim contrast to the life I suddenly found myself trapped in.

BG: What’s the purpose of using the present tense to tell this story?

CS: Because life happens in present tense, doesn’t it? And this is a story about life — an ordinary life, if you will, that changes literally overnight — as much as it is about death. Somehow, it seemed like the present tense would be the best way to tell this particular story. I wanted the reader to actually be there with Carolina in the book when it all happened, rather than to look back at her life, so to speak, from a distant angle.

BG: What other authors and books have most influenced your development as a writer?

CS: When I wrote this book, I hadn’t had the time (or energy) to read a single page in years. So it’s hard to say exactly what influenced me. Generally, I tend to read stories about women’s lives and I tend to like them the most if they’re a bit… raw, self-reflecting, and in at least some sense uncompromising. I think Scandinavia has lots of brilliant authors doing exactly that right now, Karolina Ramqvist and Sigrid Rausing being two of them, but I’ve also enjoyed and gained inspiration from the works of Sheila Heti, Dave Eggers, Sally Rooney, Jeffrey Eugenides, Ariel Levy, Melissa Broder, and Max Porter.

Find out more about the author on her Facebook page.