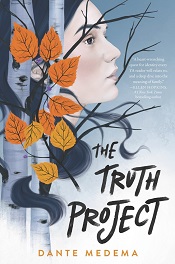 Dante Medema is the author of The Truth Project, a Summer/Fall 2020 Indies Introduce debut for young adults and a Fall 2020 Kids’ Indie Next List pick.

“When budding poet Cordelia decides to focus her senior project on her family’s genealogy, she submits a DNA analysis only to discover the horrifying truth that the man who she always believed to be her father is not really her biological father,” said Lauren Nopenz Fairley of Curious Iguana in Frederick, Maryland, who served on the Indies Introduce panel that selected Medema’s book. “Beautifully written in verse form, poignant, and affecting, The Truth Project is something truly special that will grab hold of your heart and not let go.”

Medema lives in Anchorage, Alaska, with her husband and four daughters. When not writing, she dabbles in baking, decorating, painting, sewing, and reading up on enneagram personality types.

Here, Nopenz Fairley and Medema discuss the inspiration and characters in the author’s debut.

Lauren Nopenz Fairley: What was your inspiration for Cordelia as a character and the complications she comes up against? 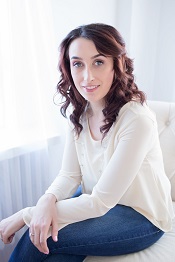 Dante Medema: I had the idea for the premise first, and one of the things I asked myself was, “Who would be most hurt by this?” I came to the conclusion that it would be someone who already felt like she didn’t belong in her family. I felt like this really let me dive into the theme of belonging and what makes family. As I was figuring out Cordelia as a character, I used the enneagram to type her as a four. Typically, fours are the artists of the enneagram — a bit more sensitive and in tune with their feelings.

LNF: Poetry is obviously a major theme not just in the layout of the novel, but in the story as a whole. What influenced you to write your debut in verse?

DM: I was inhaling verse novels the summer I drafted The Truth Project. With an artistic, very self-aware character, I felt like it made sense for her to use poetry to express herself and connect with the world. As a teen it was this part of my life I cherished — sharing poems with my friends in our notebooks. I wanted that for Cordelia, too.

LNF: Kodiak is an interesting addition to Cordelia’s story. What role does he play in Cordelia’s journey of self-discovery?

DM: Kodiak. Kodiak. Kodiak. Kodiak was originally supposed to be her cry for help — I’d intended for him to be much more “bad boy” and less misunderstood. I was getting to the bottom of his character and why he was so wounded when his backstory came to me and everything changed. He was struggling, too. Cordelia saw it and connected with that struggle in a strange, parallel way I can’t describe without spoiling too much of the book. Despite his history, he became a safe space for her.

LNF: Is any of Cordelia’s story inspired by events in your own adolescence?

DM: I’ve been fairly open about the fact that I grew up in a home with complicated family dynamics. As a teen, I really struggled with the fact that my parents had this whole life before me full of secrets and events they didn’t want me to know. While it wasn’t inspired by actual events, I think I had a lot of the same feelings Cordelia had as she learned to grow into the fact that her parents were human.

LNF: As a first-time published author, what drew you to the YA genre? What was your goal in writing from this particular POV?

DM: I’ve always been a big reader of YA and love the fact that it is typically hopeful. The characters usually believe that there is good in the world, hope to be had, and they’re fighting to make their dreams come true. I really love writing in that space, and my goal in this project (and every project) was to inspire hope in my readers while exploring a situation that felt entirely hopeless.

Find out more about the author at dantemedema.com.