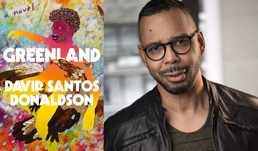 Donaldson was raised in Nassau, Bahamas, and has lived in India, Spain, and the United States. He attended Wesleyan University and the Drama Division of the Juilliard School, and his plays have been commissioned by the Public Theater. He was a finalist for the Urban Stages Emerging Playwright Award and has worked as the Artistic Director for the Dundas Centre for the Performing Arts in Nassau. Donaldson is currently a practicing psychotherapist and divides his time between Brooklyn, New York, and Seville, Spain.

Max Ruthless of Foggy Pine Books in Boone, North Carolina served on the panel that selected Donaldson’s book for Indies Introduce. They said of the book, “If you’ve ever been saved by a story or nudged back to life by a narrative, this book is for you! Beautifully written and discerningly plotted. Lovers of Baldwin (and everyone else, honestly) won’t be able to put it down.”

Max Ruthless: Greenland is a phenomenal meta-literary thriller. I was glued to the book until the last page! An idea that the book toys with is that of the redemptive and clarifying power of stories. What stories have made you feel seen (in whatever ways were most powerful to you) or saved?

David Santos Donaldson: First of all, thank you for that very kind description of Greenland! That’s extremely gratifying to hear. Despite the serious issues raised in the novel, I wanted the reader to have a fun feeling of suspense. I wrote it kind of furiously possessed; the story took over. I had no idea where this crazy ride was going.

But your question was about me personally being seen or saved by stories. And I’m realizing now, the answer is a paradox. On one hand, every story I’ve read has saved me. From my favorite early childhood books like Where the Wild Things Are, to Anna Karenina, to Beloved. I recognize parts of myself and my condition in all of them. It’s how I’ve always felt seen, less alone. As a child, all I did was write plays and cajole my cousins and neighborhood kids into acting in them. I’ve only ever been able to relate to life through stories. I think narratives are what make us human. I’m a huge fan of Joseph Campbell. His entire life’s work was dedicated to myths and their ability to save us, to provide essential meaning to our lives.

The strange paradox is, on the other hand, I’ve never found any stories that represent someone with my life circumstances. And that feels lonely, like I’m invisible. That’s why writing this novel became so important. There’s a famous Toni Morrison mandate: “If there's a book that you want to read, but it hasn't been written yet, then you must write it.” I’ve never found a protagonist like Kip Starling — or a story like his. This is not to say I haven’t found writers who felt especially validating. There is James Baldwin, of course; and Stew, who wrote the Broadway musical Passing Strange. And the work of Pico Iyer, who speaks of being a “Nowherian” (a person of no fixed abode) like me, and this, too, feels affirming. But I’ve never felt fully “seen” by any novel. And yet, the paradox is that I’ve felt “saved” over and over by so many stories.

MR: The novel-within-the-novel is about E. M. Forster and Mohammed el Adl. Our protagonist, Kip, feels a strong connection with el Adl and eventually begins to converse with him. As an author, what historical literary figure would you want to have a tête-à-tête with?

DSD: When I hear this question, I think about that old warning “Never meet your heroes.” I’ve actually met some people I’d admired greatly, and unfortunately, I finally understood that warning. But I’m pretty sure if I sat down with James Baldwin, it would not be a disappointment. He was beyond brilliant. And “eloquent” isn’t even enough to describe his verbal powers. I could image sitting down over coffee or drinks late into the night (he liked his bourbon) and sharing ideas and experiences into the wee hours. I would love to give him a big hug and thank him for all he has given me, and the world. Hands down, James Baldwin would be my first pick for a tête-à-tête. What an unforgettable evening that would be!

MR: This novel felt a little like a literary smorgasbord with so many literary references and figures popping up all over the place. I could tell that stories are important to you. What role does literature play in your personal life, not as an author but as a human?

DSD: I love your distinction between an author and a human! It’s funny — and it’s perfectly apt, because authors are not like humans. We play at being gods, creating our own universe and everyone in it; determining the fates of our poor creations. It’s fun but it’s also a dangerous game because people turn to fiction to help navigate real life, to understand themselves and the world around them. And so authors have a great responsibility to tell the truth as honestly as possible. The Zen Buddhist teacher, Thich Nhat Hanh, has specific instructions for his meditators when they share experiences: Do not teach or preach what you’ve learned; and only speak directly from your own personal experience. This is what’s most useful to others. I’ve benefited immensely from great writers sharing their personal truths. I’m always reading, but I’m not a casual reader. I only read work I feel is going to expand me or sharpen my own truth. If a book isn’t doing this, I put it down. With all the great books there are to read — more than I could read in my lifetime — I get nervous losing time on works that don’t nourish or force me to grow.

After finishing high school in The Bahamas at 16, I was very lucky to re-do my last two years of high school in the Berkshires, at the super progressive Buxton School, whose motto is “live your education.” Everything you study you must understand in terms of how it applies to your life. There’s an academic tradition in Junior year to read Tolstoy. War and Peace and Anna Karenina became the paths through which I learned who I really was, what I believed in life, and how I wanted to live. I am eternally grateful for this experience. Tolstoy was a genius at recording life honestly, in great realistic detail. I know these days it’s not cool to hold up this old icon of the Western canon — and it’s true, old white hetero men have had enough of their day in the sun — but, ironically, reading Tolstoy has allowed me to be more of myself; and to write my own truth as a Black queer person. Tolstoy’s work stands for human truth and liberation. It has defined who I am, and who I am still becoming.

MR: The main character, Kip, is a Black queer man who finds pieces of himself in Mohammed el Adl and finds power and knowledge in discovering their similarities. As an author, did you seek to create a character that others could find themselves in? And how much of yourself, if any at all, did you put on the page in this novel?

DSD: This is such a great question — and one that gets to the very heart of my novel: the idea of finding one’s true voice. I imagine all writers hope their readers will find themselves reflected in the work, but I knew if I was going to achieve that at all, the only way was to be as honest as possible. Toni Morrison proves that, ironically, with more specificity, the more universal the work becomes. But it doesn’t work if it’s not rooted in specific truths. I thought if I could tell my naked truths there would be others who’d also see themselves. So in writing Greenland I really didn’t let myself fake anything. I never made a character do or say something I had not experienced or known in my life. Even if it was coming out of the mouth of an eighty-year-old Black woman from Georgia, or an Inuit woman running a café in Greenland. I had to know the essence of the experience. I don’t mean I didn’t make things up (the whole thing is fiction of course), but all the basic ideas, even the crazy visitations from the goddess, are what I know from life (believe it or not). I didn’t even allow myself to write anything that sounded lyrical if it wasn’t also true. I sacrificed what I thought was “good writing,” for honesty. I decided if it really sucked in the end, I didn’t have to show anyone. And so Kip is kind of like my avatar — not me exactly, but there’s nothing he experiences that I haven’t also experienced in some essential way. For the sake of drama, he’s a lot more of a mess — confused and often over the top (in a way I’m not, hopefully). But there is a lot of me on the page.

MR: This is a cliché question but with such an incredible debut, I can’t wait to see what you do next — do you have any future projects lined up? If not, what's your dream literary project?

DSD: Gosh. With Greenland being my debut novel, I was a little unprepared for all the work that comes with being published. It’s been very exciting but it’s also taken up the space and time I usually have to dream up ideas, or dedicate to writing. So I don’t have any projects ready to dive into yet. But there are some ideas I’ve been tossing about for years. I’m still drawn to the idea of using historical people and situations to parallel or reflect contemporary life. Since I read a lot, I’m aware of how writers from the past still live through their work — and how much they impact my current life. So, as with E. M. Forster and Mohammed for Greenland, I’ve got a few ideas of unusual ways historical literary figures show up in the life of a contemporary Black queer person today. But that’s all I can say for now. I guess what I come up with next will have to be a surprise for us all.

Find out more about the author at davidsantosdonaldson.com.