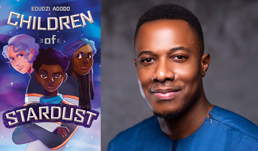 Edudzi Adodo is the author of Children of Stardust, a Summer/Fall 2022 Indies Introduce middle grade selection.

Adodo graduated from Durham University in England, where he studied politics, philosophy, and economics. Now, he writes the stories he wished he had as a child: science fiction infused with African culture and mythology. He lives in Lomé, Togo.

“Are you ready for a hilarious, action-packed space adventure? Follow our hero, Zero, from his city of children to even crazier worlds in search of an intergalactic treasure,” said Kilaparti. “Filled with stories based on mythology and exciting space technology (or maybe magic?), you’ll be sure to read this as fast as a whizzer!”

Hernandez added, “A fun thrill-ride from the start. Edudzi Adodo gloriously paints a space-scape so full of adventure and humor, you’ll not want to put it down. Our hero Zero has longed to become a space-exploring Saba. When a craft crashes onto his planet, the mysterious and strange pilot may just provide his very wish! Full of wild, witty, and whimsical characters, this debut is a great book to put in the hands of any young, imaginative readers you know and tell them to strap in for a fun and bumpy ride.”

Ernio Hernandez: What was the very first kernel of an idea for this amazing “bucket-of-popcorn” story?

Edudzi Adodo: The relationship between Zero and Zoe was the first thing I imagined. I had this idea of a young boy with big dreams of becoming a space adventurer in order to follow in the footsteps of his mentor and idol. The boy’s admiration for his idol would be the driving force for him going on an adventure. The idea grew and grew until it began to develop a sort of gravity of its own, attracting more and more ideas (Whizzers, kobastickers, Plexarians like Mr. Gauche, Goobers) — and they all coalesced together to form the book that is now Children of Stardust!

Revati Kilaparti: How did you develop the magic and science in your book?

EA: Over a long time! It was something I kept tweaking over the process of writing the book. I really wanted to create an innovative system of magic. Something people hopefully hadn’t seen before. I have always been fascinated by the use of symbols in African culture. Whether it’s the adinkra symbols in Ghana or even the motifs on cloths and fabrics, symbols are everywhere in Africa. I started to think: what if these motifs and symbols were not just decorative? What if they had real powers? And what if in this world, in order to use magic the inhabitants of the world of Children of Stardust had to use these symbols? And now what if these symbols were present on stickers? And so the idea for the kobastickers came at the intersection of the two ideas: African traditional symbols, and stickers. I wanted the story to be set in a magical world that was wacky and futuristic and funny and outlandish. The aesthetic for the world was so clear in my mind I even gave it a name: Space Zadou.

EH: On a personal note, I was happy to make an appearance as Mr. Hernandez (the guild lawyer “on leave”), please call me when they cast the movie. :) But really, how did you come up with such cool names like Zero Adedji, Wanderblatch, Hernando Vega, Octave Gurnani, Camih Sagbo, Mr. Gauche, Rozan Leombre, and so many more?

EA: Deal! I will give you a call if ever they cast the movie! This is a great question! How I name characters is generally the result of careful consideration, trial and error, and instinct (and not necessarily in equal proportions!) I try to give characters names I think resemble them. Some of it is the aesthetics of the letters in the name or how the name looks visually. Some of it is how the name sounds.

Sometimes the names are homages to characters I have loved in books or comics I have read in the past. Sometimes they are taken from people I know and I use them to infuse a little bit of the essence of these people into the characters.

Then there’s the fact that the characters in Children of Stardust are also multicultural and I wanted the names to reflect that.

Even the letters that comprise the names is something I have given thought to. For bad guys I generally use a lot of letters further down the alphabet (V’s, W’s , S’s etc…) in their names. For good guys letters at the start of the alphabet are used more in their names because they are familiar and seem friendlier (at least to me!).

RK: Growing up in the US, the only African myth I was taught was Anansi (the trickster spider). What myths did you grow up with?

EA: I really began to encounter African Myths as an adult. I think I can speak for a lot of people when I say that growing up I was more familiar with western myths (Greek and Norse mythology), culture and history than I was with their African counterparts. I was raised by a Haitian mother in a Francophone West African country and went to a British school. Somehow in moving between these different spheres I was insulated from aspects of the local culture. I went looking for them as an adult. This was based on a need to connect with a part of my heritage and a desire to add African stories and myths to the rich collection of cultural references I had collected throughout my life. Myths like that of Agokoli the mad Ewe king and his fortifications made of stones bonded with human blood, or the legends of the war between the Ashantis and the Ewes and the ruse the wily Ewe sailors used to stop the Ashantis invading their lands. In travels to different communities in Togo I discovered myths such as that of the ‘twins’: wooden statuettes that represent a deceased child or sibling that stays with you everywhere you go (and is meant to eat with you), or about Kelesie artifacts used for luck.

EH: This book is such an imaginative adventure; I wonder if your childhood was filled with any books that struck a chord with you?

EA: There are two that come to mind. The first is Treasure Island by Robert Louis Stevenson. I remember my dad had a hardcover edition of the book made with calf binding. I must have read that book hundreds of times. Then there’s Harry Potter and the Chamber of Secrets by J.K Rowling. But I did not read much growing up.  As a child I spent the majority of my time playing football, climbing up tall trees I couldn’t get down from, or telling tall tales I couldn’t get myself out of (without having my ears yanked afterwards). But Harry Potter and the Chamber of Secrets was one of the rare books I managed to pick up, stay with, and would read and re-read. I loved the mix of humor and intrigue. The detective story applied to a coming-of-age story with children going to school was amazing. Apart from that there was also A Series of Unfortunate Events, which I really loved, as well as the Artemis Fowl series.