An Indies Introduce Q&A With Gabby Noone 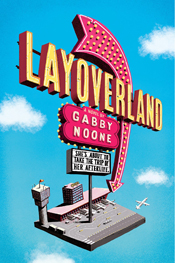 Gabby Noone is the author of Layoverland, a Winter Spring 2020 Indies Introduce young adult debut and a Winter 2019–2020 Kids’ Indie Next List pick.

“After Beatrice Fox suffers the indignity of dying while ‘Hey, Soul Sister’ is playing on the radio, she’s not sure how her afterlife could be worse,” said Bethany Strout of Tattered Cover Book Store in Denver, Colorado, who served on the panel that selected Noone’s debut for Indies Introduce.

“That’s until she wakes up in an airport — an airport that is Mediocre with a capital ‘M.’ The weather is constantly 53 and drizzly, the shower sprays lukewarm water, and the clothes are all orange,” Strout continued. “To move on herself, Beatrice must help others reckon with their pasts. No problem — until she meets a frustratingly cute boy who died on the same exact day she did. Beatrice is excellent eternal company, and the heady issues tackled here — morality, forgiveness — are deftly layered in. Beatrice may be stuck in purgatory, but Layoverland is a reader’s paradise.”

Noone grew up in Abington, Pennsylvania, and currently lives in Brooklyn, New York. She graduated from Barnard College with a bachelor’s in English. Her writing has been featured in Rookie, The Hairpin, The Cut, Jezebel, and elsewhere. She is also an aspiring game show contestant.

Here, Strout and Noone discuss using humor to talk about death and morality, and how the author created “the most medium possible fantasy world.”

Bethany Strout: Layoverland takes place primarily in the afterlife — in this case, a very blah airport. There have been so many religious, philosophical, and pop cultural depictions of the afterlife — how did you settle on yours? 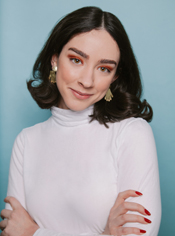 Gabby Noone: I thought a lot about how getting in contact with the everyday corporations that run the world — like internet and cable providers, insurance companies, airlines — sometimes feels as mysterious and frustrating as getting an answer from a higher power. Rarely do you ever get a direct answer or solutions to your problem! So with that in mind, I realized an airport is the perfect metaphor for purgatory. You’re trapped there, everything that happens there is basically out of your control, most of the people that work there are just as helpless as you when it comes to having answers for why things are delayed or what have you, and if you stay longer than you expected, you start to feel like you’re losing your mind.

Also, as someone who rarely traveled in their childhood, complaining about airports seemed like such a sophisticated adult problem. So the idea of writing about teens (unaccompanied minors!) that are stuck there just felt like it had a lot of potential.

BS: The world-building in this book is crucial. And, as I was reading, I found myself weirdly excited to see what new mediocre part of Bea's environment would be revealed. Can you elaborate on what it was like to create an entire fantasy world — but instead of it being the coolest fantasy world ever, it was the most medium possible fantasy world?

GN: I got really into the idea that maybe purgatory gets renovated every few decades to fit into earthly conceptions of a transitional space. When Bea arrives, we can assume the airport hasn’t been renovated in, like, 50 years. It’s functioning, but everything is outdated and falling apart. I thought a lot about how the setting should slowly drive people to desperation. They think they can handle being there no problem, but the more and more they stay, they want to leave. It’s purgatory, so there should be some motivation to not get too comfortable.

Everything in this airport toes the line between mediocrity and just plain torture. It’s all designed to be annoying, but tolerable at first. The food is all covered in Jell-O, but at least it’s edible. The beds are uncomfortable, but at least they’re real beds and the sheets get changed every day. Everything is orange colored, but at least it’s not a worse color, like, I don’t know, neon yellow? The aspect that I felt the most evil including is zero entertainment at the airport. No books, no movies, and the only music you can hear is the last song you heard before you died. Awful!

BS: A lot of this book is about forgiveness: forgiving others and ourselves. While that's difficult enough in life, Bea has the additional complication of having been in a fight with her sister when she died, and never being able to talk to her sister again. What advice do you have for teens who are struggling to forgive themselves?

GN: It’s so easy to absorb all the talk about cancel culture that we apply to famous people (which I don’t even think is necessarily bad when applied to people in positions of power, who abuse their power time and time again) to our everyday lives and be like, “Oh god, I said or did something with an impact I didn’t intend and now I want to crawl into a hole because everyone hates me now.” I struggle with this myself, as an adult! But it’s so important to remember mistakes can always be learning lessons, especially when you’re figuring stuff out for the first time. A good apology isn’t just words, but committing yourself to doing better and actually living it.

GN: I just felt like I couldn’t write about death without it being funny! Don’t get me wrong, I think death is terrifying; when someone you love dies, it’s devastating. But I just think the idea of death and the many interpretations of the afterlife are so funny, like the idea that for centuries people have been freaking out and working themselves up over this thing where you never know the truth until it actually happens. We all have our beliefs, but no one knows for sure and it’s inescapable and the one thing we all have in common!

I’ve always tended towards humor and I’ve never considered myself a serious writer, but I think using humor can be a great way to underscore the more emotional and serious parts of a story. I think when something makes you laugh, but then unexpectedly chokes you up, that is just the best.

GN: I would take clothing from the 1960s, films from the 1970s, and pop music from the early 2000s. Despite all of its flaws, I’m happy that today’s era lets me easily access all these things online, at once!

Find out more about the author at gabbynoone.com.