Jocelyn Nicole Johnson is the author of My Monticello, a Summer/Fall 2021 Indies Introduce adult selection and an October 2021 Indie Next List pick. 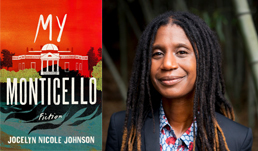 My Monticello includes five short stories and a novella all set in Virginia. The collection is forthcoming from Henry Holt on October 5, and was selected by National Book Award winner Charles Yu as his most anticipated book of the year.

“It’s smart,” Huang said. “The first story, ‘Control Negro’ is jaw-droppingly good. But what really brings this collection home is the novella: set in a sort of dystopian future where Naisha, descended from Thomas Jefferson and Sally Hemings, and her neighbors take refuge at Monticello. The author is one to keep an eye on and I look forward to her future works.”

Johnson has been a fellow at Tin House, Hedgebrook and VCCA; her writing has appeared, or is forthcoming, in Guernica, The Guardian, Kweli, Joyland, Phoebe, Shenandoah, Prime Number Magazine, and elsewhere. Her short story “Control Negro” was anthologized in Best American Short Stories 2018, guest edited by Roxane Gay, who called it "one hell of a story," and it was read live by LeVar Burton as part of PRI’s Selected Shorts series. A veteran public school art teacher, Johnson lives and writes in Charlottesville, Virginia.

Audrey Huang: I really loved the format of this book, with the combination of short stories and ending with a novella. Do you prefer writing in short story form or a in a longer form?

Jocelyn Johnson: I really do love short stories, reading them and writing them! Maybe it’s the compression, or the artful way things can be left unsaid. Maybe it’s the way everything might matter, down to one word.

As a writer, I find some stories — like the novella — require more space. Even when I write longer fiction, I often find myself employing short story conventions.

AH: What were some of the influences in writing this collection?

JJ: I was influenced by recent troubling events here in Charlottesville, Virginia, like the bloodying of a Black UVA student in 2015 and the deadly Unite the Right rally in August 2017, where protestors paraded downtown carrying symbols of historic racist violence, as if to say, This isn’t your home.

I was also inspired by Virginia itself, the state of my birth. I folded in so many memories and observations, from my college days in the Shenandoah Valley to my time teaching visual arts in Arlington, as well as my experiences living and parenting in Charlottesville.

Fiction-wise, I was influenced by so many writers: folks like Richard Wright, Toni Morrison, Octavia Butler, Danielle Evans, and Charles Yu. I found inspiration in a variety of story collections: Heads of the Colored People by Nafissa Thompson-Spires, Friday Black by Nana Kwame Adjei-Brenyah, and so many others!

AH: What was your research process for My Monticello?

JJ: Confession: When it comes to research, I’m a mess. Which is why the eponymous novella — which takes place largely at Thomas Jefferson’s plantation home, Monticello — is fiction!

Even so, it was important to me that the details of this near-future story be accurate and feel true. So, I visited Monticello quite a few times and listened to the history as relayed by the institution’s docents. l used Monticello’s extensive virtual and written resources to learn about the house and its objects. I also looked at the work of scholars like Annette Gordon-Reed (who wrote The Hemingses of Monticello) and read Thomas Jefferson’s own book Notes on the State of Virginia.

Also, in the wake of Unite the Right, there has been a new public focus in our town on our local history around racism and its legacies, going all the way back to the time of the founding fathers. I’ve attended talks about the demolition of the historically Black neighborhood of Vinegar Hill, as well as an assembly for fourth graders at a school where I worked, during which a guest speaker shared his experiences of integrating an elementary school after massive resistance had shuttered it for years. I drew on those stories and more.

AH: Are there any plans on expanding My Monticello into a novel?

JJ: Actually, I’m good with the length of the novella. It feels just long enough to immerse the reader in the world of the story, but still slim enough to leave space for pondering the story’s big ideas: What will we do — all of us — to address the societal and environmental issues that threaten these characters?

AH: Up until recently, Thomas Jefferson’s history as an enslaver has mostly been an afterthought in the teaching of his contributions to this country. Have you seen the newer teachings at Monticello (which juxtapose the Jefferson who espoused freedom and democracy with the Jefferson who enslaved human beings and his “relationship” with Sally Hemings) impact not only Monticello, but Charlottesville? Do you see Monticello as having a role in this national reckoning of the evils of slavery and its impact on Black Americans throughout the history of this country to today?

JJ: I think that what we do matters — as institutions and as individuals. We are social creatures — we look to one another for how to be, and the sway of those around us is extremely powerful, toward good or ill. As we know better, we should do better.

From my perspective as a visitor, Monticello has changed a lot over the years, and it continues to change. It has complicated the narrative around Jefferson and incorporated some of the stories of the enslaved people who lived at Monticello, including Jefferson’s own Black descendants.

The story Monticello tells itself and the public matters, not only to the hundreds of thousands of visitors it hosts each year, but also to the town of Charlottesville, which sits in Monticello’s shadow. It matters to the students who take school trips up the mountain and to smaller institutions that look to places like Monticello as a model. I imagine it matters, in some kind of way, to the Black descendants of slavery at Monticello. It matters to me.

AH: What do you enjoy reading for fun?

JJ: Ha! Do I read for “fun” anymore? Let’s see, I love literary fiction and genre hybrids. I love complex characters, compelling predicaments, and shining prose. I love stories that invite me in and take me somewhere unexpected. A few recent faves: Land of Big Numbers by Te-Ping Chen, Aftershocks by Nadia Owusu, and Cleanness by Garth Greenwell. I’m currently reading How to Wrestle a Girl by Venita Blackburn and A Natural History of Transition by Callum Angus. Wow, there are so many beautiful and needed stories out there in the world.

Find out more about the author by visiting jocelynjohnson.com.