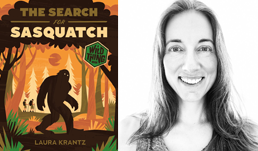 Laura Krantz is the author of The Search for Sasquatch, a Summer/Fall 2022 Indies Introduce middle grade selection.

Krantz is a journalist, editor and producer, in both radio and print, and co-founder of Foxtopus Ink. Her podcast, Wild Thing has received critical acclaim from Scientific American, Rolling Stone, and The Atlantic, which named it one of the best 50 podcasts in 2018 and 2020. Wild Thing is also a series of non-fiction, middle-grade books from ABRAMS Kids, with the first title, The Search for Sasquatch, coming October 11, 2022. In addition to Wild Thing, her recent work includes editing and production work on The Syndicate (Imperative Entertainment/Foxtopus), Side Door (Smithsonian), Air/Space (Smithsonian), and others. Laura's prior experience includes a decade of editing and producing at NPR in Washington, DC, and at KPCC in Los Angeles. Her writing has appeared in Popular Science, Smithsonian Magazine, Outside, High Country News, Newsweek and, her personal favorite, the Archie McPhee Catalog. She currently lives in Denver but home will always be Idaho.

Ernio Hernandez of River Bend Bookshop in Glastonbury, Connecticut and Andrew King of the Secret Garden Bookshop in Seattle, Washington served on the bookseller panel that selected Krantz’s debut for Indies Introduce.

King said of the book, “After learning that an old family member was both an anthropology professor and collector of Bigfoot evidence, author Krantz dives right into the woods with several sasquatch seekers on a straightforward and scientific mission: Is there something to the Bigfoot phenomenon? From modern research methods to revisiting ancient stories of the elusive species, The Search for Sasquatch is a fantastic guide for young readers curious about cryptids, exploring how part of the fascination and passion for them comes from chasing both the possibilities and the unknown.”

Hernandez also shared, “This fun, nature-geeky read feels very Sy Montgomery’s How to Be a Good Creature meets The X-Files. A rare nonfiction that doesn’t feel like just a factual lecture, but a great narrative that flows throughout with a touch of a personal journey too. Presented with great illustrations, digestible science-based breakdowns, and — of course — spooky stories, this page-turner is bound to be a hit with any young nature lover, science fan, and adventurous reader you know. One small book for Bigfoot, one giant plea for being kind — to all of nature and its wonders.”

Here, Krantz, Hernandez, and King discuss The Search for Sasquatch.

Ernio Hernandez: The Search for Sasquatch feels like such a great narrative, there were times I forgot it was nonfiction. (Can we make “Sci-Non-Fi” a thing?) What was the process of plotting the book out like for you?

Laura Krantz: I LOVE the idea of Sci-Non-Fi! Plotting everything out started back in 2017, before the idea of a book even existed. I was putting together the first (and, at the time, I figured the only) season of my podcast, Wild Thing and involved coming up with a narrative arc for the entire series and hooking people with this Bigfoot story. I wanted to pull on all these different threads of science, psychology, history and, of course, humor. Bigfoot is a magnetic creature for lots of people but also a total joke for others — the goal was to get everyone, even the non-believers, to listen and get something out of it. Funnily enough, I hadn’t been thinking about children all that much when I started, but when the podcast came out in 2018, I heard from parents who were listening with their kids, and teachers who were using elements of it in their classrooms. I knew then that I had to write a book.

While the book does draw on the podcast, it’s also its own thing. The core narrative arc is similar, but I dug into fun new scientific elements, as well as things that I assumed an adult audience would know but that I could explore in more depth for kids. It was a learning journey for me, too. It was a little like taking a self-taught crash course in basic biology, evolution, etc. (which I then fact-checked extensively with teachers and scientists). But the goal remained the same — have everyone fall in love with the idea of Bigfoot, even if they didn’t believe.

Andrew King: The Search for Sasquatch is advertised as #1 in the Wild Things series — are you allowed to tell us what other sorts of creatures and cryptids are coming to readers in the future?

LK: I can definitely tell you about #2! I actually just finished the revisions on the manuscript for it in August. Like the first book, which is based on season one of the podcast, Book 2 — tentatively titled Is There Anybody Out There? — is based on season two and it’s about the search for extraterrestrial life. So get ready to read about space and aliens and all the amazing things scientists are doing to figure out if there is, in fact, anybody out there.

EH: You must have found SO many more sighting stories than you were able to include. Was there a favorite that didn’t make it into the book or one you definitely made sure to keep in?

LK: I heard tons and tons of stories during the two years that I was researching for the podcast. I chose only to include encounters that had more of a scientific feel, which also tended to be the ones that I found more convincing. This meant sightings reported by people who had worked as wildlife biologists, or for fish and game departments, or who were avid outdoorspeople — people who really understood the natural world and the environment. When someone like that tells you they’ve seen something weird, something that’s nothing like they’ve ever seen/heard before, well, it kind of makes me pay attention. And hands down, the story I absolutely had to include came from a guy named John Mionczynski. He is the quintessential mountain man, someone who is extremely knowledgeable about nature and the creatures in it. And when he told me about his possible run-in with a Bigfoot, I felt the hair on the back of my neck stand up. I’m not going to share it here — it’s definitely in the book!

AK: In the book, your interest in Sasquatch becomes more prominent after you find out you’re related to a dedicated Sasquatch researcher — is the Sasquatch your favorite of well-known cryptids, or are there any others that you're particularly fond of?

LK: Having grown up in Idaho, lived in Washington and Oregon, and spent a lot of time in the Pacific Northwest, I’m pretty sure knowing about Bigfoot is something of a requirement! Sure, there are lots of other cryptids out there, but all I can say is that my heart belongs to Sasquatch.

EH: I feel there’s something in this for the nature-lover, the science fan, the spooky-campfire-story geek, the mystery solver, and other off-the-beaten-path types — who would you love to get this book into the hands of?

LK: Everyone! Especially kids who are interested in any or all of these things. I was a huge reader as a kid (and still am) and kind of read anything I could get my hands on. I wanted The Search for Sasquatch to hook people with the outlandish tale of Bigfoot, and then use that interest to teach people about how you can look at these sorts of questions through a scientific lens and not lose sight of the fun of it all. But also, if we’re putting wishes out into the universe, don’t you think it’s time for a remake of Harry and the Hendersons? So if someone wants to get a copy to Steven Spielberg, I’m not going to complain!

Find out more about the author at laura-krantz.com.