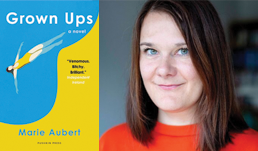 Aubert made her debut in 2016 with the short story collection Can I Come Home With You, published to great acclaim in Norway. Grown Ups is her first novel; it won the Young People’s Critics’ Prize and was nominated for the Booksellers’ Prize in Norway.

Anne Frey of Watermark Books & Café, Wichita, Kansas served on the bookseller panel that selected Aubert’s book for Indies Introduce. Frey said of the book, “Grown Ups is a novel you can devour in one sitting. This story will resonate with readers of all ages and circumstances.  At the center of the story are Ida and Marthe, two adult sisters who are in very different stages in life. Throw in a weekend at the family cabin in Norway to celebrate their mother turning 65 — and you have drama! Marie Aubert writes what we all want to say but society tells us that we should not. Grab a copy and be ready for a story you will soon not forget.”

Anne Frey: Why did you choose sibling rivalry to be a theme of the story?

Marie Aubert: I’ve always been interested in sibling relationships, maybe because I grew up as an only child (until I got a sister when I was 19!). I am fascinated by how we never seem to outgrow our sibling relations. For most of us, they are the longest relationships we have throughout our lives, but we don’t get to choose them ourselves — siblings can be extremely close and compete for their parents’ approval at the same time. Love and hostility can be intertwined when we know each other that well.

At the same time, I was at a point in my life where the gap between friends who did have children and friends who did not became more and more significant. That inspired me to write about how two sisters can be divided by their lives turning out very differently, and how their situation of having or not having a family reveals the deeper pain in their relationship. In this story, the question is how having a child is tied to your identity as a grown-up — especially in relation to your parents and siblings. What kind of an adult are you, if you don’t have a family on your own? Do you get to be a “real” adult, or are you just a forever daughter or son? What makes adult identity, and can you ever become an adult in the relationships where you have always been a child?

AF: Is one sister more of a villain than the other?

MA: Ida, the novel’s protagonist, has just turned 40 and is long-time single and childless. She has started to feel that some things will soon be too late for her. She is used to succeeding at many fields, and in the sister relationship, she likes to think of herself as the superior and more grown-up one, and this has been her identity and role in the family. When little sister Marthe reveals that she is pregnant, the power dynamic between the two sisters is turned upside down. For Ida, what is at stake is not just having a child, but her whole identity of how she perceives herself, and her deepest fear of not being loved.

I tend to write about people who end up doing bad things to people they love, despite the good intentions they may have, and I think both sisters take part in the power play that is going on. Ida crosses several lines in the book — she starts to undermine her sister, she flirts with her sister’s husband and talks behind her back. I don’t think she does any of these things because she is a bad person, but she is at a point in her life where she feels pressured and lonely, and loses her grip. I think most of us have a little bit of Ida in us — that we all can come to a place where our desperation and jealousy takes hold of us, and where we hurt the people we love — intentionally or not.

It is exciting to see how readers and critics respond to the sisters’ relationship, and to the Ida character in particular — some love her and relate strongly to her, other readers are really angry at her. I wanted to write both Ida and Marthe as complex characters that are both good and bad. When my characters come off as people you can relate to emotionally and at the same time be appalled by things they say and do, I feel I have done something right.

AF: How did you come up with the timeline of the story?

MA: I tend to make up the plot as I go along, and I’m always searching for the conflict or the character that is the engine of the story. This time I knew from the start that I wanted the story to begin with Ida’s arrival at the family’s summer house, but I didn’t know where it was going to end, and I tried out different timelines and settings before the story became clear to me. I wanted the story to take place in one specific place, during just a few days, where the characters have no way of escaping themselves or each other — that is probably something I take with me from having written a lot of short stories. I wanted Ida and her relationships to change during the story, and I wanted to leave her with a different view of herself, her family, and her future.

AF: Tell us a little about cabin culture in Norway.

MA: Oh yes! Norwegians have very strong feelings about their cabins or hytter, which usually are located in the mountains or by the sea. These are not log cabins, more like well equipped second homes, and it’s perfectly acceptable to leave work early on Fridays to drive to your place before the weekend rush. It’s common that a hytte is inherited from one generation to the next, and this lays the ground for a lot of feelings involved — this is often the place you visited regularly as a child, and holds a lot of childhood memories — and for conflict. Families often end up fighting about what kind of maintenance and changes should be done with the place, and the question of which siblings should inherit it is a central one in a lot of inheritance settlements.

AF: If you could have coffee with one character in the book, who would it be?

MA: I can recognize myself in both Ida and Marthe, but the one I would have coffee with is probably Stein, the elderly partner of the sisters’ mother. He started out as a comical character for me, and in some ways he still is, but I gave him a more important role as I wrote. Stein is the one person that manages to see this family dynamic from the outside, and he sees Ida’s struggles clearly and more sharply than she thinks, but without judging her.