Natasha Bowen is the author of Skin of the Sea, a Summer/Fall 2021 Indies Introduce young adult selection and November/December 2021 Kids’ Next List pick. 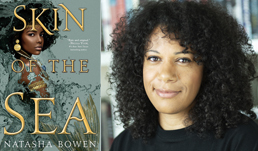 Natasha Bowen is a writer, a teacher, and a mother of three children. She is of Nigerian and Welsh descent and lives in Cambridge, England, where she grew up. Natasha studied English and creative writing at Bath Spa University before moving to East London, where she taught for nearly 10 years.

René Kirkpatrick of University Book Store in Seattle, Washington, served on the panel that selected Bowen’s book for Indies Introduce.

René Kirkpatrick: What was your inspiration for writing Skin of the Sea?

Natasha Bowen: The first book I remember reading on my own was The Little Mermaid by Hans Christian Andersen. I loved the thought of a world under the sea and became obsessed with mermaids. When it came to wanting to write a story about the sea and magic, I went back to my love for mermaids. As I explored different ideas, I decided to write the story I wanted to read. And I wanted to read a story about Black mermaids, magic, and West African history. When I came across the beliefs that Yemoja, a deity in the Ifá spiritual belief system, followed the very first enslaved I was hooked. Some say she followed them to offer comfort, some say that she wrecked slave ships, and others believe she gathered their souls to return them home. It was this last belief that caught me. What if she created others like her to help her do this? And what if one of her creations saved a boy rather than his soul? Skin of the Sea unfolded from there.

NB: It was long and very detailed! I am a very curious person. As far as I’m concerned, we are never done learning. Researching Skin of the Sea was such a joyous process that included reading history books (with a focus on Black scholars), articles, videos, and conversations with friends across the diaspora as well as an Ifá priest. I love making notes and drawing, so I have lots of journals full of facts, diagrams, and sketches. These range from different African kingdoms, the arrival of the Portuguese in West Africa, to sharks, plants, wildlife, and more.

One aspect of the research literally had me obsessed for a month. I’ve always been enthralled by ancient African kingdoms, particularly the kingdom of Benin. When I studied the layout of the city it was obvious that it was laid out in a certain way. And then I discovered fractals and another layer to my passion grew. Fractals are repeating patterns that continue into infinity. They are found in nature (our lungs, brains, leaves) and can also be man-made. An ethno-mathematician, Ron Eglash, found examples of these across Africa and believes it shows proof of the understanding of the concept of infinity long before it was “discovered” by Europeans. I read Eglash’s work, watched his TED talks and played around with creating my own fractals. This concept of infinity is included in the book, threaded through to showcase African mathematical and artistic prowess.

RK: Almost every culture has a mermaid tale; what makes Mami Wata special to you?

NB: Mami Wata is a water spirit known across West Africa but is also used to describe some deities who are presented as mermaids. Yemoja is shown with a tail of a fish and is an orisa of the Yoruba Ifá spiritual belief system and, since my father is Yoruba, this connection strengthened my motivation. It also became an aspect of the story that helped me to learn about my ancestors. I think we all seek connection and depth to our identities and writing about Mami Wata was one way for me to do this.

RK: Skin of the Sea is filled with African mythology. Can you talk a bit about the gods, goddesses, and creatures that populate your book?

NB: I already knew a little bit about orisas, but after reading more about them and speaking to an Ifá priest, Baba Ifamuyiwa, I was able to learn more about Yoruba deities. The orisas play a significant part in Ifá, and each has one has unique powers given to them by Olodumare, who is the Supreme Creator. To make this fair, they rained down the powers to earth and each orisa had to claim what they could, hence the range. From Yemoja, who is known as mother of all and the source of all water, to Sango who is the deity of thunder and lightning, each orisa is worshipped for different qualities. Enslaved Africans who had Catholicism forced on them disguised each orisa as a saint and, in this way, maintained their beliefs and some of their identity. Learning about orisa altars, what to offer them, and how they have evolved across the diaspora was fascinating. Hearing the varied stories and beliefs of these powerful African gods captivated me.

Skin of the Sea also has legendary creatures, mainly from West and Central Africa. Exploring the stories of the bultungin as shapeshifters who turn into were-hyenas and Yumboes, Senegalese fairies, added to my desire to write a book where we see alternate versions of the usual mythical creatures. I also included the Ninki-Nanka, a river monster, as well as the sasabonsam, who are like giant vampire bat-like creatures. For me, blending these creatures only added to the magical world of Skin of the Sea and stayed true to the land and time in which the book is set.

RK: I think many people would love to know the details of how you write. Can you tell us about where you write and what you need around you to write your books?

NB: I write in a notebook a lot, especially the first draft. There’s something different, I feel, when I’m writing in longhand. The words flow just that little bit more easily. I have a battered refillable leather notebook that I carry everywhere with me. When I was writing Skin of the Sea, I was teaching full time and so I used to write in snatched bites. Before school, on my lunch, and even in assemblies (I think the headteacher knew but didn’t say anything!). I also had to fit the writing in around my children, and so it was easier to whip out a notebook when I had a few spare minutes. Now, I have small office in my garden, but in the drafting stage, I still like writing in my notebook and then I’ll transfer it to Word. Sometimes I listen to music, but often I like the quiet. I have a cat and a dog, Milk and Honey, who often manage to sneak into my office. One of them is usually sprawled at my feet, and even though I complain, I like it.

If I need a break, I’ll often spend more time researching or drawing. I usually combine the two in a project book, where I’ll add articles and photos as well as my own notes. I’ve recently become interested in cartography, and I find that drawing maps is a break from writing but still adds to the story. That way I don’t feel guilty!

When I’m deep in a draft, I often wake up in the night to scribble down ideas, descriptions, and even character conversations. If I don’t, I usually forget them by the morning.

I also need to talk. A lot! I often spend hours talking the plot and characters through with my kids or a couple of close friends. Often, they don’t get a chance to say much; I think it’s just hearing myself speaking about it that straightens things out in my mind or builds on things I’d already considered.

I know when a story is going well if I go to sleep thinking about it and wake up the same.

Find out more about the author at natashabowen.com.