Thi Bui is the author of the graphic memoir The Best We Could Do (Abrams ComicArts), which was chosen by booksellers as a Winter/Spring 2017 Indies Introduce debut.

Susan Hans O’Connor, the owner of Penguin Bookshop in Sewickley, Pennsylvania, served on the Indies Introduce panel that selected The Best We Could Do. “Thi Bui’s graphic memoir is outstanding,” she said. “As the story of Bui’s life unfolds, from the birth of her child to the dark days of her own childhood in war-torn Vietnam, the reader is drawn in by the poetry of the words as well as the gorgeous black-and-white drawings. The Best We Could Do, a story about the power of family and place and home, is poignant, heart-wrenching, timely, and, ultimately, uplifting. What an exciting new talent we have in store!”

Bui, who was born in Vietnam and immigrated to the U.S. as a child, studied art and legal studies and worked as a public school teacher. She lives in Berkeley, California, with her son, her husband, and her mother.

Here, O’Connor and Bui discuss the author and illustrator’s personal story and the timeliness of her book’s publication.

Susan Hans O’Connor: What struck the Indies Introduce panel in such a powerful way was how personal The Best We Could Do is, but also how it’s the quintessential American story of a family of immigrants. Which story did you set out to write? 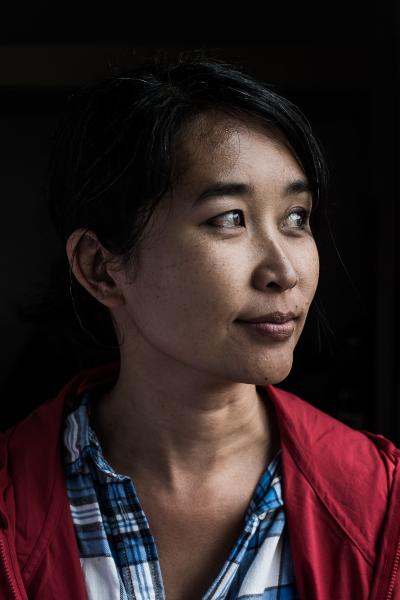 Thi Bui: When I began, I set out to write the anti-Vietnam War story, having grown up with so many misrepresentations in American films of people like me. But because I took so long, and I became a teacher and a parent in the meantime, my concerns shifted from rebelling against what I was not to trying to figure out what and who I was. I have always wanted to tell a refugee story in which the refugees are, first and foremost, fully formed human beings: people with names, personalities, histories, political leanings, varying ability, individual strengths, and failings. The reason is that even when we sympathize with refugees, we regard them as something “other” unless we are able to picture ourselves in their circumstances and wonder what we might have done in their shoes.

SHO: You tell your parents’ extraordinary story of growing up in South and North Vietnam with such vivid and compelling detail. How much did you know about Má and Bố’s history before writing The Best We Could Do?

TB: I knew quite a bit from growing up with their stories, but it was the process of trying to record all the stories and making sense of them in a continuous narrative that made me realize how much I didn’t know. This prompted many years of follow-up questions and showing my parents drafts of what I was writing and drawing, to which they would often respond with more memories and details that I would edit into the book.

SHO: Before writing The Best We Could Do, you had never before drawn comics. How did you develop as an artist and come to create an illustrated memoir? Did drawing your story change your relationship to it in any way? 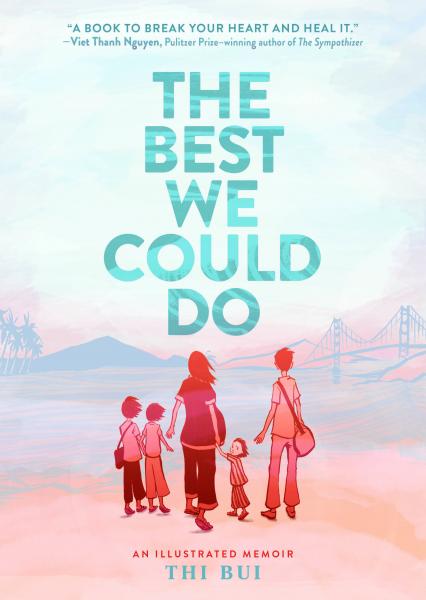 TB: I learned how to do comics by working on this book, which is not a very smart way to go about it. I must have drawn a thousand bad pages. I studied art and pursued fine art and sculpture when I was younger, and my work was often criticized as being too narrative. So I at least had the sense, eventually, to switch to a narrative medium, and I met cartoonists who were generous with their time and advice. And I read and studied comics on my own to figure out how to approach things like layout, character design, pacing, and multiple narrators. Comics are easy to read, so I think people think they’re fun and easy to do, but I can attest that they’re really hard! It wasn’t until maybe Chapter 8 (out of 10) that I felt like I had gotten the hang of sequential panel storytelling. I was pretty sure for a while that I would always have the equivalent of a foreign accent in comics, but I decided that it would be fitting to have a less masterful, more exploratory line in my drawings for a book that was about a search for one’s identity and other answers that are elusive. Drawing my story was very laborious and slow, but it was also very therapeutic. Drawing myself as a child, and my parents as children, allowed me to empathize with those children and also separate my present self from their experiences. My childhood self has been put to rest through working on this book, and I can move on now as an adult.

SHO: Given the current political climate and focus on immigration, do you feel any increased pressure to discuss the issue or take a particular stand? Do you see your book or yourself as representative of something bigger than your own particular story?

TB: I don’t mind talking politics and I’m happy to see more people paying attention to current events. My experience as a refugee is absolutely related to the plight of refugees from Syria and elsewhere today. My work as a public school teacher with an all-immigrant population also influences my views on immigration policy. It would be wonderful if we could use thinking and writing and making art not just to reflect on mistakes in the past, but to actually change the course of history and avert disaster and harm. I don’t think my book alone is enough, so I am trying to be involved in more ways than one.

SHO: The Best We Could Do has been praised by esteemed literary novelists Maxine Hong Kingston and Viet Thanh Nguyen. Do you think readers of literary prose are more open to engaging with the graphic novel today? Do you have any wise words for readers who may be reluctant to pick up an illustrated novel or memoir?

TB: People who read books also listen to music, watch films, and go to plays and performances, right? I would encourage them to think of graphic novels not only as books for children or literature-lite, but as a narrative medium in its own right (which those of us in the business actually just call comics). I don’t think that writing my story entirely in prose would have made it more literary; in fact, I think it would have lost much of its value. I would encourage book lovers to not categorize graphic novels as a genre. Superhero comics are a genre. Autobiographical comics are a genre. Comics as a whole is an artistic medium with diverse outcomes and vast potential. There are many amazing comics and graphic novels to read and enjoy, and so many more waiting to be born.