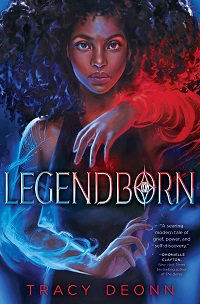 After losing her mother in an accident, 16-year-old Bree Matthews joins a residential program for bright high schoolers. Her first night on campus, she witnesses a magical attack. A secret society of so called “Legendborn” students are hunting down these creatures — flying demons that feed on human energies — and Bree soon learns there was more to her mother’s death that what was on the police report. Now a magical war is coming, and Bree has to decide how far she’ll go for the truth.

A self-proclaimed second-generation fangirl, Deonn grew up in North Carolina and received both her bachelor’s and master’s degrees from the University of North Carolina Chapel Hill. She has worked in live theater, video game production, and K-12 education.

Mariana Calderon of Second Star to the Right in Denver, Colorado, served on the bookseller panel that selected Deonn’s book for the Indies Introduce program. Calderon, with input from her colleague Ava Tusek, recently had a chance to ask the author about being a lifelong sci-fi/fantasy fan, and how that influenced the writing of her debut book.

Mariana Calderon: Given how many narratives have been compartmentalized into “these are for white people” (usually white men) and “god forbid they be queer,” what drew you to the Arthurian legend specifically? Was there something that drew you to Camelot as opposed to, say, Greek mythology? 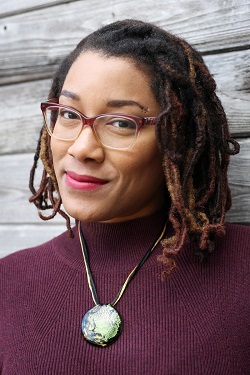 Actually, I didn’t start with King Arthur at all! I started with Bree and her question, “What happened to my mother?” When my own mother passed away, I learned that she had lost her mother at the same age that I lost her, and that the same had occurred with my grandmother and great-grandmother. So, I began writing from a place of grief and mystery, and Bree begins from that same place, too. I wanted to explore the idea of legacy and whose lives and deaths get to become legendary. As a big fantasy fan, there was a natural connection to what feels like our most long-lived legend and a favorite of mine: King Arthur. These legends are wide and varied, but they circle around the themes that felt most applicable to my dreams for Legendborn — legacy, family, generational power, responsibilities laid before children, magic that is used for good and for ill, etc.

MC: What was your favorite part of world-building? The magic and fantasy aspects of the book are so vivid, and I would love to know how you did that!

TD: The very first bit of sci-fi/fantasy I wrote was really a self-insert story. I was nine years old and I wanted something magical to happen to me. So, I think it was always a given that I’d write magic and world-building that would work on top of our world. Starting from that point meant I spent a long time making sure that the magic could conceivably exist, and fit in believably. For example, the magic systems in the book are very old and strict, and needed to function over dozens of generations in order to work as I needed them to in the book. So, my first step was to write them out in prose form first, in mostly full sentences, to test whether I could actually verbalize them! Then each system was moved to whiteboards to play out generational examples or work out problems.

My favorite part of world-building in Legendborn was deciding how magic would look to Bree, and how its appearance would change depending on the character wielding it. I used to write and direct theater, and the visual storytelling of theater means I write scenes very visually; I’m always thinking of how people are arranged in a room, what my main character can see, how the magic looks, body movement. I also used to work in video games, so I credit that background for my magic systems’ strong sense of power, rules, and consequences. Each use of power should have a result, in my mind, and each power upgrade should have logic. Game writing is great for mapping out magical structure and progression.

MC: Legendborn has SUCH a fantastic sense of place! It feels like it must have been difficult to accomplish, given how important it is to the overall plot and themes in the book. What sort of research and brainstorming did you do to nail that down?

TD: I talk about this in the author’s note, but I grew up adoring The Dark Is Rising series by Susan Cooper. It’s a contemporary fantasy series based in the U.K. that connects its magical lore to Arthuriana and treats King Arthur as if the legends were real, while asking what those legends would look like if they survived to the modern day. Once I decided to work with Arthuriana, I asked the same question of myself and realized the answer seemed very clear here in the U.S.; the Round Table would embed themselves into a secret society somehow! Secret societies are a great cover for very old generations of power. I was familiar with secret societies at UNC Chapel Hill because I went to school there for both of my degrees, and the campus is very much embedded in my mind. I did a lot of primary source research within UNC’s own archives and consulted with a PhD historian who graduated from UNC Chapel Hill herself. Tying in UNC’s history was actually quite easy with my background and because I’d been thinking about how that history impacts students for a long time.

MC: I know you’re a fan (ahem...understatement…and I’m HERE FOR IT) of Avatar: The Last Airbender. What sort of bender would you want to be? How about your characters Bree, Nick, Sel, and also Greer (because I LOVE THEM)?

TD: Oh, this is HARD! I would probably be a firebender if I could choose to be anything, but I think in reality I’m probably more of a waterbender. Bree is hard to pin down, but Nick would be an Earthbender who can also bend lava and Sel would be a firebender who can also bend lightning. Greer might be an Earthbender, but one like Bumi, with tons of humor and wisdom.

MC: What is your perfect quarantine snack?

TD: White cheddar corn puffs from Target. I had to stop buying them because the temptation was too great!

Find out more about the author at tracydeonn.com.