An Interview with Danny Caine on How to Resist Amazon 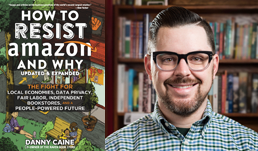 Back in November 2019, Danny Caine of the Raven Book Store in Lawrence, Kansas, released a zine called How to Resist Amazon. The zine was so successful, Caine published it as a book. Some 35,000 sales and three years later, the second edition of his book will be released on September 20 of this year. In advance of the release of the revised edition, David Grogan, Director of ABFE, Advocacy, and Public Policy at ABA, sat down with Danny to discuss his book, antitrust, and, of course, how one exactly does resist Amazon.

Dave Grogan: The second edition of How to Resist Amazon is coming out this month, which is pretty cool. Has the success of the book surprised you in any way? What kinds of things do you hear from people after they read the book?

Danny Caine: I have been absolutely stunned by the success of the book. It amazes me in so many ways that I can't possibly include them all here. But here are a few examples: seeing that stores in many different countries are carrying it, from Italy to Japan to England to Australia to Canada to France. Hearing from my friends at Bookends & Beginnings that it was their number one bestselling nonfiction title last year, selling something like 150 copies. Seeing it pop up in craft stores and record stores and art galleries, in addition to bookstores. Really, though, every time I walk into a bookstore and I see it by the front counter I'm just filled with gratitude.

DG: How many copies of the book have you sold thus far?

DG: You first published this book as a zine back in November 2019. A lot has happened since then (going for the understatement of the year). The pandemic was a boon, and then some, to Amazon’s sales. How have the last two years impacted the message of your book?

DC: If anything, the last two years have made it more urgent. For one thing, there's building momentum in the anti-monopoly/antitrust movement. There have been several progressive high-level government appointees. There's state and federal legislation making its slow way through the law-making process.  There's mounting public pressure on Amazon. There are signs that Amazon's retail arm has overextended itself. Perhaps most importantly, the Amazon JFK8 fulfillment center on Staten Island became the first unionized Amazon facility, part of a larger renaissance in the American Labor Movement. I didn't get the chance to write about any of that in the first edition, and I hope including it in the second edition can have a small part in continuing this momentum.

DG: Obviously, the title of the book makes it clear we must resist Amazon. Independent businesses understand this, but can you tell me: What do you tell a consumer as to why it’s so important to resist Amazon?

DC: Whenever I have this conversation with a consumer, I like to stress the things bookstores and small businesses can do. Bookstores contribute to their communities. They create a space for loving literature. They create an environment where it's possible to connect with movements for social change, in the process creating a space that's a lot more permanent than other movement spaces. If Amazon were to have its way unimpeded, a lot of those bookstores wouldn't be able to do that vital work.

DG: How did we get to this point, where Amazon — whether its retail, third party marketplace, or its web services — is pretty much ubiquitous in everyday life? Even if we do resist Amazon, how do we stop future Amazons from taking its place?

DC: This is a great question, and it's a perfect example of why I think the question of resisting Amazon is a policy question more than it's a consumer-behavior question. For the last few decades, antitrust law has been interpreted in a way that basically gives companies a free pass as long as they keep prices low. This narrow approach doesn't consider things like workers' rights, environmental impact, consumer privacy, and community health. It also enables the anticompetitive behavior Amazon regularly engages in. To prevent this, we need a new holistic interpretation of antitrust law that considers pricing, yes, but also the general health of the whole marketplace and the workers who make it run.

DG: What is your message to policy and lawmakers? Why should they be concerned with Amazon, and what would you tell them is the solution? Amazon has a lot of partnerships in government and spends quite a bit of money lobbying lawmakers. How do you think we overcome this challenge?

DC: I would tell them (and I have) that Amazon is remaking my industry and the whole retail market in a way that threatens the sustainability of my small business. That's not just my business. Amazon and their model makes it difficult (or even impossible) for all kinds of retail small businesses, especially the ones that use their platform. A hobbled retail small business landscape is really bad for the communities these officials are elected to serve. The solution is reinvigorated, holistic antitrust policy. We need policies that make it illegal for companies to act as a platform and competitor on the platform. We need stronger enforcement against predatory pricing. We need policies that make it easier for workers to unionize, and policies that allow unions to properly fight for their members. I think our best hope in the face of Amazon's massive lobbying apparatus is to tell our story as well as we can. One way we can do that is through coalition-building, one reason I'm so pleased to see the ABA team up with groups like the Institute for Local Self-Reliance. One way I'm trying to help is to write a book that I hope can be a resource when people have these discussions with policymakers.

DG: Antitrust used to be a word that I think most people felt was a term for lawyers and scholars, but not for them. Have you seen a sea change with how people view antitrust?

DC: I have! There's an exciting new movement of people talking about antitrust in interesting ways. I think the most visible example of this is Lina Khan, a hugely influential scholar in the new antitrust movement, being appointed as chair of the FTC. I have high hopes for what she can accomplish in that position.

DG: With the new edition coming out next week, what are your hopes for the book? Are there any additions or changes that we should look out for?

DC: I hope this surprising little book can keep doing the amazing work it's been doing! For the first time, I'm doing a few in-person bookstore events, which will be a thrill. I'm really excited about the new additions. There's a whole new chapter on Amazon's impact on the environment and their environmental racism. There's an extended new section about the scourge of bootleg self-published books and the danger they pose to the book industry. There's of course a lot of new material about the JFK8 unionizing effort led by Christian Smalls. All told, there are 64 new pages and twice as many citations as the first edition. I hope this updated story continues to be a resource to folks looking to help in the fight against Amazon.

DG: In closing, what actions can independent bookstores take to help fight against Amazon’s anticompetitive behavior and dominance?

DC: I think telling our story is so important, as is building coalitions. Of course, be in regular touch with lawmakers about the impact that Amazon and lax antitrust enforcement has on your business. But I think my biggest hope is that bookstores can be a shining example of the right way to do things, in contrast to Amazon's wrongs. Let's be motivated by a love of books and what they can represent. Let's work to make sure our workers earn a living wage. That their jobs are safe and comfortable. That our workers have an empowered voice in their company as a whole. That we're building communities, not tearing them down like Amazon does.

DG: Thanks for your time Danny, and good luck with the book!