Patterson announced his campaign to bring attention to independent bookstores and bolster their efforts to inspire children to become lifelong readers last September. 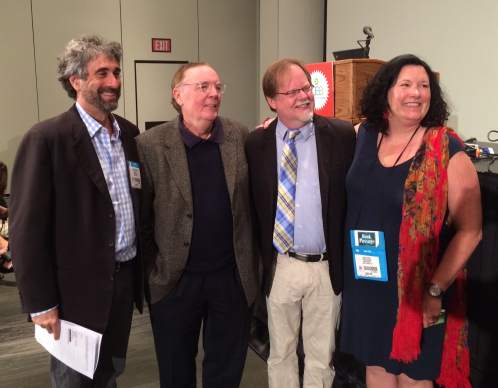 Joining Patterson on the BEA panel were three booksellers whose stores received awards in the first round of grants: Karen West, director of events and conferences at Book Passage in Corte Madera, California; Dave Shallenberger, co-owner of Little Shop of Stories in Decatur, Georgia; and moderator Mitchell Kaplan, owner of Books & Books in Miami, Florida.

“It’s so important to have independent bookstores in this country,” said Patterson, pointing to the integral role booksellers play in raising competent readers. There is a particular need to focus on at-risk kids, who are often at a reading level that leaves them ill-equipped to enter high school, he said, and indie bookstores are key to reversing this trend.

Patterson kicked off his campaign in February by distributing a total of $267,000 to 55 bookstores across the country. With its award, Book Passage purchased a van that has allowed it to add five schools to its book fair roster. The store also purchased a new sound system that changed the way it conducts in-store events. Book Passage is now able to host more children safely, said West. “It’s a huge difference,” she told Patterson. “You have no idea the impact those two things made.”

Little Shop of Stories used its grant to purchase a 14-passenger school bus that is in the process of being transformed into a “bookmobile,” which will eventually bring authors and storytimes to area schools. “We’re just super excited about getting out in the community,” said Shallenberger.

Books & Books used its grant to purchase books for kids who couldn’t afford to buy books when authors visited their schools. “It made these kids feel empowered,” said Kaplan. “It was huge for us.”

Bookstore receiving awards in the second round of Patterson grants are: