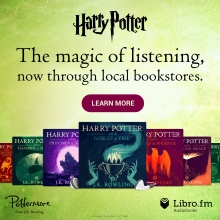 Libro.fm announced today that it has partnered with Pottermore, J.K. Rowling’s digital publishing, e-commerce, entertainment, and news company, to offer eight Wizarding World digital audiobooks through independent bookstores nationwide. This is the first time that indie bookstores in the U.S. have been able to offer Harry Potter digital audiobooks to their customers.

The Wizarding World digital audiobooks include all seven novels in J.K. Rowling’s Harry Potter series as well as Fantastic Beasts and Where to Find Them, narrated by Academy Award-winning actor Eddie Redmayne, who starred as Newt Scamander in the 2016 film inspired by the Hogwarts libary book.

“With summer approaching, these audiobooks will be perfect for family road trips or long plane rides, and our customers will love being able to immerse themselves in the timeless stories and magical world that J.K. Rowling has created,” said Margie Scott Tucker, co-owner of Books Inc. in San Francisco.

Bob Sommer, co-owner of Tempe, Arizona’s Changing Hands Bookstore, said, “Gayle [Shanks, his wife and store co-owner] and I are rereading the Potter books with our nine-year-old grandson. Once a year, we listen to Jim Dale reading the next book in the series while driving to California and back on our annual beach vacation trip. It’s great that this year we’ll be able to purchase the audio through Libro.fm.”

Noting that indie bookstores have had great success with the Harry Potter series in print, American Booksellers Association CEO Oren Teicher said, “For two decades, the Harry Potter titles have held a singular spot on the shelves of independent bookstores, as young readers — who are now themselves parents of young readers — discovered the wonders of an amazing story and great writing. Indie booksellers look forward to this new opportunity to share J.K. Rowling’s remarkable series in digital audio.”

“Harry Potter titles have always held a special place within independent bookstores — on the shelves and in the hearts and minds of booksellers,” said Stephanie Ballien, director of marketing at Libro.fm. “Now in digital audio, current and future generations of Wizarding World fans can discover and rediscover these stories through their beloved local bookstores.”

More than 270 indie bookstore locations are now offering audiobooks to their customers through Libro.fm. To learn more about partnering with Libro.fm, visit its indie partners webpage.