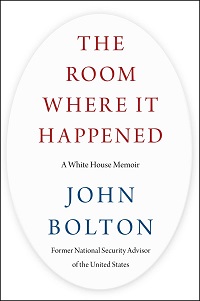 On June 20, a federal judge ruled that John Bolton’s book The Room Where It Happened: A White House Memoir (Simon & Schuster) could proceed to publication. This came after the Trump Administration attempted to block Trump’s former national security advisor from publishing his memoir, claiming the book contains classified information.

Following Judge Royce Lamberth’s ruling, Bolton’s book was published on Tuesday, June 23. Prior to that, more than 200,000 copies of the memoir had already been circulated domestically and internationally to news outlets, distributors, and bookstores.

Judge Lamberth’s ruling held that the widespread circulation of Bolton’s book meant that blocking distribution would be impossible. In other words, the damage was already done.

Bolton’s book was originally set for a March 17 publication date. In January, the National Security Council sent a letter to Bolton’s lawyer saying the manuscript of his book could not be published until “significant amounts of classified information,” including some at the “top secret level,” were removed.

In Judge Lamberth’s decision on Saturday, he left open the possibility that Bolton did violate nondisclosure agreements he signed while working at the White House, signaling that the Trump Administration may have a case to make.

“This was Bolton’s bet: If he is right and the book does not contain classified information, he keeps the upside mentioned above; but if he is wrong, he stands to lose his profits from the book deal, exposes himself to criminal liability, and imperils national security. Bolton was wrong,” wrote Judge Lamberth.

Bolton’s lawyer, Charles Cooper, applauded the court’s decision to allow for the book’s publication, but took issue with the judge’s “preliminary conclusion at this early stage of the case that Ambassador Bolton did not comply fully with his contractual prepublication obligation to the government.”

Simon & Schuster released a statement, saying, “We are grateful that the Court has vindicated the strong First Amendment protections against censorship and prior restraint of publication. We are very pleased that the public will now have the opportunity to read Ambassador Bolton’s account of his time as national security advisor.”