Here's a preview of the inaugural Indie Next List selections and notables titles. All ABA members with storefront locations will be receiving copies of the July Next List in the IndieBound Literary Liberation Box on its way to stores now. 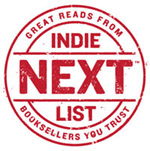 The Story of Edgar Sawtelle: A Novel by David Wroblewski (Ecco, $25.95, 9780061374227 / 0061374229)
"This story of a modern-day Hamlet, set in the northern woods of Wisconsin, reaches depths of emotion rare in any novel, much less a debut. Driven by powerful characters, particularly the mute Edgar and the amazing dog Almondine, this story of a family's destruction will resonate with readers long after completion." --Bill Cusumano, Nicola's Books, Ann Arbor, MI

What Was Lost: A Novel by Catherine O'Flynn (Holt, $14 paper, 9780805088335 / 0805088334)
"With irreverent wit and sharp insight, O'Flynn weaves a mesmerizing tale of a precocious missing girl and the people who surround her. By tapping into emotions with ease and grace, this book wonderfully weaves together characters and the love that even loss can't affect." --Meaghan Leenaarts, Island Bookstore, Corolla, NC

The Condition: A Novel by Jennifer Haigh (Harper, $25.95, 9780060755782 / 0060755784)
"Jennifer Haigh's latest book is the intimate story of a New England family, beginning one idyllic summer on Cape Cod, before their life changes suddenly. Twenty years later their story picks up again and you get to know each member of the family, what motivates them, and how they communicate -- or don't -- with each other. I loved this book." --Kym Havens, Wellesley Booksmith, Wellesley, MA

How the Soldier Repairs the Gramophone by Sasa Stanisic (Grove, $24, 9780802118660 / 0802118666)
"A child matures in Bosnia as war comes clanking down his street and he tries to make sense of the good and the bad in the world through stories. A bold novel, and timely." --Russ Lawrence, Chapter One Book Store, Hamilton, MT

America America: A Novel by Ethan Canin (Random House, $27, 9780679456803 / 0679456805)
"A wealthy landowner befriends and helps a boy from a blue-collar family. But he is also intent on ushering a liberal New York senator into the White House. This layered and intelligent look at family and politics couldn't be more timely in this troubled election year." --Betsy Burton, The King's English, Salt Lake City, UT

Oxygen: A Novel by Carol Wiley Cassella (Simon & Schuster, $25, 9781416556107 / 1416556109)
"When Dr. Marie Heaton's judgment in a tragic case is questioned, she begins to doubt herself and, then, others around her. I thoroughly enjoyed the book -- full of action and suspense and rich in characterization and subplots -- from start to finish." --Gayle Wingerter, Inklings Bookshop, Yakima, WA

The Enchantress of Florence: A Novel by Salman Rushdie (Random House, $26, 9780375504334 / 0375504338)
"From the palazzi of Renaissance Italy to the battlefields of Persia and the shores of Far India, in The Enchantress of Florence we are transported effortlessly through life's great conflicts around destiny, beauty, war, magic, and loyalty. Rushdie's novel is a glorious tale of mesmerizing power and indelible images, an aesthetic fulfillment all its own." --Marie du Vaure, Vroman's Bookstore, Pasadena, CA

Northline: A Novel by Willy Vlautin (Harper Perennial, $14.95 paper, 9780061456527 / 0061456527)
"Allison Johnson is on the run, and she is determined to start fresh in Reno. Paul Newman is along for the ride, making sure Allison makes the right decisions. Vlautin's honest writing will break your heart." --Zach Sampinos, Sam Weller's Books, Salt Lake City, UT

The Sister: A Novel by Poppy Adams (Knopf, $23.95, 9780307268167 / 0307268160)
"This is a stunning, character-rich novel detailing the relationship of two English sisters who have not communicated for 50 years. As the author goes back in time, we learn, through the older sister's voice, the complex and dark secrets that bind them. Readers will be fascinated." --Karen Frank, Northshire Bookstore, Manchester Center, VT

Hit and Run: A Novel by Lawrence Block (Morrow, $24.95, 9780060840907 / 0060840900)
"Lawrence Block's hit man protagonist Keller is alone in Des Moines after being set up for murdering a presidential candidate. (After all, he was just in Iowa to do another contract killing.)The action never stops and leaves us hungering for the next book." --Patricia Worth, River Reader, Lexington, MO

Rules of Deception by Christopher Reich (Doubleday, $24.95, 9780385524063 / 0385524064)
"Jonathan Ransom, a world-class mountaineer and surgeon for Doctors Without Borders, goes on the run after his wife dies in an accident in the Swiss Alps -- and he finds out she wasn't who he thought she was. A well-written thriller that takes off like a shot!" --Susan Wasson, Bookworks, Albuquerque, NM

Church of the Dog: A Novel by Kaya McLaren (Penguin, $13 paper, 9780143113423 / 0143113429)
"Mara, an art teacher, takes up her new job in ranch country in Washington State, moves into a bunkhouse on Earl and Edith's property, and starts a magical relationship. This wonderful gem of a book is a story of bringing out the wonder and magic in all of us." --Sue Richardson, Maine Coast Book Shop, Damariscotta, ME

The Secret Scripture: A Novel by Sebastian Barry (Viking, $24.95, 9780670019403 / 0670019402)
"Barry's novel of Roseanne McNulty, now in her hundredth year in an Irish mental hospital, is a haunting story of memory and how small decisions can have large consequences. The writing was such a treat that I actually got to the last page late one night and saved it until the next morning. I didn't want to read it until I was fully awake and could relish the end." --Rona Brinlee, The Book Mark, Atlantic Beach, FL

Telex From Cuba: A Novel by Rachel Kushner (Scribner, $25, 9781416561033 / 141656103X)
"Set in the last days of Cuba's golden age (at least, for American businessmen), this saga, at once familial and national, chronicles the drama of Castro's coming coup upon a family stuck in the center of an unstoppable storm. Kushner's storytelling -- as detailed as it is colorful; as truthful as it is fictional -- reads like a vast mural in prose, covering the reader's imagination with pages of forceful action and forthright emotion." --Steve Shapiro, Rainy Day Books, Fairway, KS

Up for Renewal: What Magazines Taught Me About Love, Sex, and Starting Over by Cathy Alter (Atria, $24, 9780743288408 / 0743288408)
"When writer Cathy Alter challenged herself to change her life, she became the guinea pig in her own experiment: to live her life by the headlines of women's magazines. Not only did her journey of self-discovery lead her to the man she had always dreamed of, but she also discovered how to cook a magnificent meal and forged a better relationship with her mother, all the while maintaining clear skin. Funny and endearing." --Holly Nelson, Changing Hands Bookstore, Tempe, AZ

Chosen Forever: A Memoir by Susan Richards (Soho, $23, 9781569474921 / 1569474923)
"Susan Richard has written a sequel to Chosen by A Horse, her wonderful memoir. Her new book relates how the publication of Chosen totally changed her life, connecting her to friends and family from whom she was estranged, and to a man who became the love of her life." --Nancy Olson, Quail Ridge Books, Raleigh, NC