CBS produced a video last month that featured Major League Baseball pitcher Sean Doolittle of the World Series-bound Washington Nationals, who discussed his passionate support of independent bookstores and his campaign to go to at least one in each city his team visits. 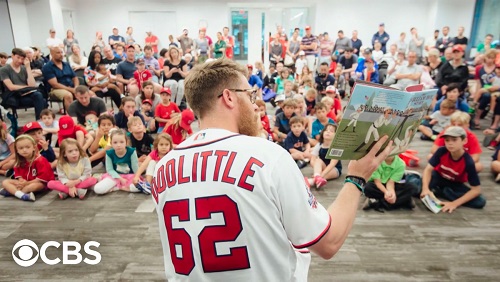 Libro.fm CEO and co-founder Mark Pearson and Christine Onorati, owner of Libro.fm partner store WORD Bookstore in New York City, also appeared in the news segment to talk about how crucial this type of support is for indie bookstores.

“Online shopping has really sort of affected our entire world,” Onorati told CBS. “But I think that we serve a purpose in our communities that makes us a little different than a lot of other retail stores. That’s why somebody like Sean, who’s shining a spotlight on books and how important they are, will always be a great thing.”

Back in April, Doolittle, a Libro.fm member, announced that he would be patronizing at least one indie bookstore in each city visited by his team, CBS reported. As part of the process, Doolitte also tweets using the handle @whatwouldDOOdo for his 100,000 followers, noting the special aspects of each store he visits and his impressions of the experience. His list so far includes Mysterious Galaxy in San Diego, Source Booksellers in Detroit, A Capella Books in Atlanta, Books & Books’ South Beach, Florida, location, Tattered Cover Book Store in Denver, and more.

“To me, it’s just so cool the way that these bookstores create this inviting, inclusive space,” Doolittle told CBS. “It’s a lot more than a bookstore.”

In July, Doolittle also tweeted in support of online book-buying alternatives like IndieBound and Libro.fm on this year’s Amazon Prime Day, which turned out to be a record sales day for Libro.fm.

“We are doubling every year,” Pearson said. “And when Sean Doolittle sent his tweet out, you know, we had a record day. When he says that it”s cool to buy audiobooks and books from your local bookstore, it sends the message that books and bookstores matter, and where you buy them makes a difference. By giving your money to them, you keep that going. You keep reading alive in the community.”

The CBS video is available to view on Libro.fm's blog.

Libro.fm is fully integrated with IndieCommerce, and a co-branded storefront is fast, free, and easy to set up. For more information about creating a storefront, contact bookstores@libro.fm.