In the following excerpt from the updated trade paperback edition of My Bookstore: Writers Celebrate Their Favorite Places to Browse, Read, and Shop (Black Dog and Leventhal), author Jo Ann Beard pays tribute to Oblong Books & Music, which has locations in Millerton and Rhinebeck, New York.

Approximately four in the afternoon, Rhinebeck, New York, dentist’s office, me in the chair trying to manually control my gag reflex. So far he couldn’t even look in there with his mirrored stick. I tried all the things I had learned to do over the years in order to get my teeth worked on, from breathing through my nose (useless) to touching the tips of my fingers to each other (thumb to thumb, index to index, etc.) to making an orb shape (more interesting than breathing through the nose, but still useless) to holding one leg straight up in the air (difficult) and finally the other leg too (exceedingly difficult and thereby helpful, except disconcerting to the dentist, who asked me not to). Once when I was about eight a hygienist ignored the gagging and wound up thrown up on, though most of it went on me. When I told the Rhinebeck dentist this, he left the room and came back with something that had never been tried on me before: nitrous oxide.

When I first moved to Rhinebeck it had a new age bookstore that also sold pendants and amulets, oil by the vial, and handmade instruments. Across the street was another bookstore that sold potboilers and Christian literature. They sat facing each other for a number of years until one became a real estate company and the other became a real estate company. If you wanted a book, you had to drive to another town. On fine upstate weekends, you could even drive the twenty miles over to Oblong Books in Millerton — an airy, wide-windowed Main Street shop with a cunning indoor walkway that led across a backyard and into the children’s department, which had extended into the next building, around the corner. I fell in love there, not just with the store, but with the fellow who took me to see it and bought me a book about the Hudson Valley.

Reader, I fell in love with all three.

Although I once lived in a house where whippets were kept on hand the way others might keep Band-Aids, I was so tethered to my own anxious reality that I had never experienced nitrous before. No need to belabor it here, but suffice to say I finally understood those long-ago friends sitting on our hoary old cat-scratched sofa responding to Gilligan’s Island like it was Fellini. When the dentist pulled his tools out of my mouth, I kept the clip in my nose, inhaling the gas until he finished puttering and rolled the tank backward out of the room. Apparently I was the last appointment of the day; the lively flamenco guitar that had been playing over the buzzing drill was nowhere to be heard and it seemed that lights were being switched off. At which point the hygienist stuck her head in and said, “You’re okay to go, right?” 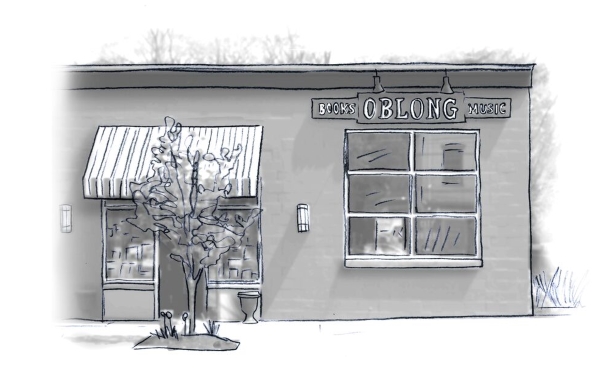 Reader, I was not.

So instead of pelting along the side streets, the way I usually did, I drove in a stately manner right down the main thoroughfare in Rhinebeck, feeling as though I was holding on to the steering wheel (I was) while the rest of my body bobbed gently against the ceiling of the car, like a Mylar balloon. According to the speedometer, I was going seven in a thirty. Thus the honking.

Weekenders from the city have overtaken Rhinebeck in their migration up the Hudson, bringing with them a CVS to replace the local drugstore, where the pharmacist had kept a checkerboard set up for the old-timers who wanted somewhere to go and gripe in the afternoons. The village also lost its rambling, slope-floored hardware store and its low-ceilinged IGA grocery, and the local diner had upped their breakfasts to dinner prices. We suddenly had our own spa, a shop that sold only things that were chili pepper-related, and another that sold nothing but one kind of candle in different sizes and colors. The colors changed with the season, of which there ended up being three before it closed. For a while we had a shop that sold only things made by bees.

Reader, you guessed it.

There’s possibly no better place for a stoned writer to find herself than a bookstore, if you don’t count eating establishments, and I made my way through the aisles for what — in bookstore time — must have seemed like hours. When the owner asked if he could help me, I thought for a long time about it while he straightened shelves.

“Not really,” I finally said.

Others came and went, conversations were had, purchases were rung up, it’s possible glances were exchanged. But they let me sit there, my new local bookstore — a regular-sized woman on a child-sized chair, with an incomprehensible picture book on her lap. Reader, it had to do with rabbits.

So, just when everyone needed something good to happen — it was September of 2001 — Oblong Books & Music extended their reach from Millerton and opened a smart, creative, and ambitious business in our boomtown. It was smaller then than it is now, the children’s department once again claiming enough space that the back was extended to accommodate it and to create room for the readings that are held each week. Instead of packing the aisles to listen, the crowds now have space for everyone to sit, and to enjoy reading-wine and reading-cheese afterwards. Dick Hermans, the owner, handed it over to his daughter, Suzanna Hermans, in 2007, and it was she who expanded the store and its reach into the community of local writers and readers.

Dick Hermans was the one who, right around the time both the nitrous and the Novocain were wearing off, asked me again if he could help me find anything. I was wandering in the music section, flipping through CDs and listening to them click in that satisfying way, something I hadn’t done since Tower Records folded. Flamenco guitar music? I asked.

Reader, he had it.

JO ANN BEARD is an essayist and creative nonfiction writer. She is author of the novel In Zanesville and of The Boys of My Youth, a collection of autobiographical essays, as well as essays and articles published in magazines, journals, and anthologies. She has been the recipient of a Whiting Award and a Guggenheim Fellowship. She teaches at Sarah Lawrence College.

From the book MY BOOKSTORE: WRITERS CELEBRATE THEIR FAVORITE PLACES TO BROWSE, READ, AND SHOP, edited by Ron Rice and Booksellers Across North America. Copyright 2017 by Hachette Book Group, Inc. Reprinted by permission of Black Dog & Leventhal, an imprint of Hachette Books, New York, NY. All rights reserved.