With the recent news that Amazon will now be collecting sales tax in Arkansas, slightly more than 94 percent of the U.S. population resides in areas where Amazon is collecting sales tax on in-state purchases, according to data compiled from the U.S. Census Bureau. In light of this, the American Booksellers Association’s E-Fairness Map has been updated, reflecting the fact that a majority of states are taking strides to level the playing field for Main Street retailers.

Amazon is currently collecting sales tax in 40 states and the District of Columbia; there are now only five states with sales tax laws on the books where Amazon does not collect and remit sales tax: Hawaii, Idaho, Maine, New Mexico, and Oklahoma. After removing the states that do not have sales tax laws — Alaska, Delaware, Montana, New Hampshire, and Oregon — approximately 97 percent of the U.S. population resides in areas where Amazon collects and remits sales tax.

“As the updated E-Fairness Map makes very clear, only a handful of states without a level playing field remain,” said David Grogan, ABA’s director of public policy and advocacy. “Of course, ABA understands this fight is not yet over and — together with other independent businesses — we will continue to advocate vigorously for e-fairness.” Grogan urged booksellers in the five states that are not enforcing their sales tax laws to adapt the template letters in ABA’s Advo-Kit (Advocacy Action Kit) to urge their lawmakers to level the playing field in their state.

The many colors on the E-Fairness Map are a testament to the different methods employed by states to recoup required sales tax revenue. Areas in light blue on the map are states where Amazon has agreed to collect and remit sales tax. States in dark blue, such as Missouri, have passed affiliate nexus laws, but since Amazon has fired its affiliates in those states, the online retailer does not collect sales tax.

States in green on the map have passed an affiliate nexus and/or warehouse nexus law, and Amazon has agreed to collect and remit sales tax.

Oklahoma is shaded yellow since it passed a “use tax” law that requires remote retailers to provide customers with notification of the total sale price of their purchases so they can pay a use tax to the state on purchases from remote sellers. Colorado, Kentucky, Louisiana, Oklahoma, South Dakota, and Vermont have passed similar laws, though in cases where the state also has an affiliate nexus law the map is shaded light blue to indicate that Amazon is collecting sales tax. (Colorado’s use tax law was subsequently challenged by the Direct Marketing Association. The U.S. Supreme Court recently refused to hear the case, and in lieu of the use tax law the state passed an affiliate nexus law. In January 2016, Amazon agreed to collect and remit sales tax in Colorado.) 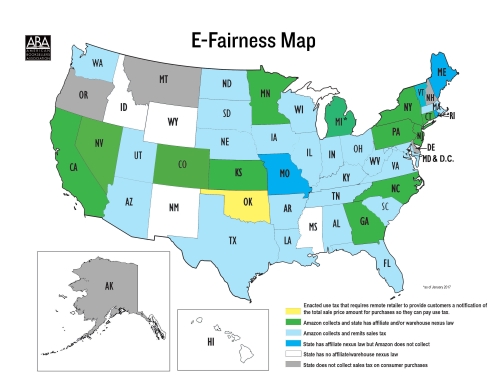