Bookselling This Week recently spoke with Linda Berentsen, owner of Orca Books in Olympia, Washington, who announced in April that the 27-year-old store will transition to a cooperative business model by the end of October of this year.

Becoming a cooperative will invite a number of new business opportunities for Orca, Berentsen said, as well as establish a stable succession plan. 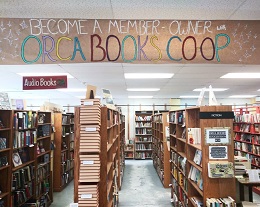 “I would like to have the option of retiring,” Berentsen told BTW. “I don’t want Orca to cease to exist, so I need an exit plan.” That plan, she said, is transitioning to a co-op business model, and she is working with John McNamara at the Northwest Cooperative Development Center to make the store’s transition a reality.

McNamara, Berentsen said, has valuable knowledge from working on a legacy project centered around the aging population in the United States. “The baby boomers are needing to retire,” she said, “and he has said that 80 percent of their businesses just disappear. [Co-ops] are an option to help the businesses continue on.”

Orca began the transition in February 2019, Berentsen said, and in the past few months she has focused on handling the financial logistics of the transition.

To get the ball rolling on converting to co-op, Berentsen provided McNamara with Orca’s relevant financial documents, and he conducted a feasibility study. Then, the two worked together to create a budget and timeline for the first year, which helped determine Orca’s fundraising budget. McNamara has also worked with Berentsen to determine how Orca will structure the co-op’s board.

“He also has a lot of contacts,” she added, “and he put us in contact with a someone who did a valuation of the store. He also guided us through what kind of co-op we wanted to be — community-owned or worker-owned or both.”

As part of the transition to a co-op model, “we’ve had to incorporate new bank accounts, new credit card processing, new accounting, a new business plan, and new procedures,” Berensten noted. “There’s seven of us who are working on it [all store employees], but the first community meeting went really well, so we’re going to have some more people to help.”

About 30 people attended Orca’s first community meeting, Berentsen said; five were already members, and 10 more signed up while during the meeting, where McNamara explained what a co-op is as well as what Orca needs for success. What is most important at this stage in the process is getting people to help with the membership drive, Berentsen added.

The Orca Books Co-op will have four membership types: Basic Consumer, Low-Income Consumer, Worker, and Organization/Business; each member will pay a fee for membership, which will grant different benefits, discounts, and voting rights. A board of directors will also be composed of such members. Those who live outside of the Olympia area but would still like to become members can do so by mail.

General membership benefits include a daily 10 percent discount on used books; access to a members-only sale on new and used books; a coupon for $10 off any purchase of $50 or more; and voting rights in board elections and other co-op matters, among other benefits.

The transition to a co-op is a welcome development because industry has changed in her time as a bookseller, said Berentsen. “It’s so much bigger. We’re required to do so many other things, like selling online and social media. The co-op model takes the pressure off me or a single owner to subsidize and guide the store,” she said, noting that while she hadn’t considered the idea of becoming a co-op in the past, when her staff approached her with the idea, she knew it was the right choice.

“The ability to navigate difficult circumstances will be strengthened, and there will be more ideas and more hands to implement the ideas as well,” said Berensten. And while the co-op will bring change to the business end of Orca, she noted that “it won’t be any different for the customers. It’s going to be the same as far as the general atmosphere of the store.”

The store is currently fundraising $200,000 to support the transition, she added, which will allow Orca to be “in a much stronger position” going into the co-op model. Said Berentsen, “We just hope that if the community wants the store enough, they will make it happen.”