On July 12, Boston bookstore Papercuts J.P. released The Papercuts Anthology: What Happened Here, Volume 1, co-edited by Katie Eelman and Kate Layte, which captures the magic of the bookstore’s first year in business through works by many of the store’s visiting authors. 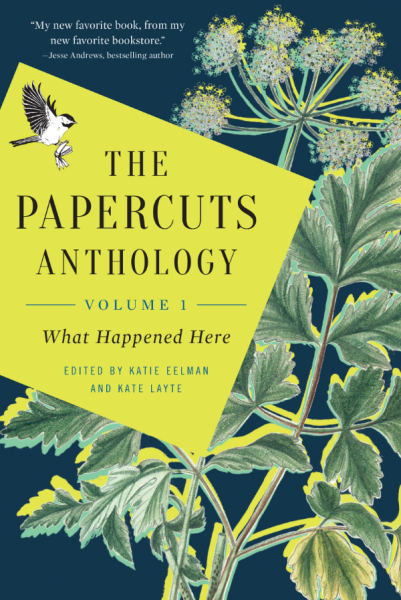 The Papercuts Anthology is a trade paperback original published by Quill, an imprint of the crowdsource-driven publisher Inkshares; it is distributed to the trade by Ingram Publisher Services.

This is the first indie bookstore collaboration for Inkshares, which launched in 2013 as an independent publisher that lets readers decide what gets published by demonstrating their support through preorders. The Papercuts Anthology reached the preorder goal of 250 copies needed in order to move ahead with publication with Inkshares’ Quill imprint.

“Crowdsourcing has been a vital part of Papercuts since we opened,” said owner Kate Layte, who used Indiegogo to raise start-up capital for the store’s November 2014 opening. “Inkshares provided the perfect platform where we could sell preorders to our community, while allowing us to have the artistic liberty to make it exactly how we wanted.”

Katie Eelman, Papercuts J.P. media and events coordinator, noted that the store’s customers were instrumental in allowing them to achieve the preorder threshold to publish with Inkshares. “The book really would not exist without their early support, and we have so much gratitude to our loyal patrons,” she said.

Latye and Eelman conjured up the idea for the anthology while at BookExpo America 2015, as they discussed the fleeting nature of their trade show experience in terms of who they met and what they heard. Layte suggested publishing an anthology that would feature the writing of authors who visited the store early on.

The enthusiasm from the contributing authors was remarkable, said Eelman, who asked all of the authors who visited the bookstore in its first year to write something for the anthology. “Since we were highly selective about the author events we hosted, our intention was that the material would end up being a unique reflection of what happened here,” she said.

Authors were asked to write fiction, nonfiction, or poetry on any subject in a piece between 2,500 and 7,500 words. “What resulted is a spectacular mix of genres and a broad range of styles,” said Layte.

The Papercuts Anthology includes contributions from 23 authors, from New York Times bestselling authors to local Boston icons. Among the pieces are an essay from author Edan Lepucki on what to do when your book doesn’t sell and musings on flying from Boston musician Rick Berlin, as well as contributions from authors Cat Warren, Jennifer Tseng, and Porter Square Books staff member Josh Cook. “We’d like to think that there really is something here for everyone, and collectively it showcases some damn good writing that we’re thrilled to share with a wider audience,” said Layte.

Eelman said the process of working with Inkshares was wonderful, and that the book turned out more beautiful than either she or Layte could have imagined.

“Inkshares is a huge advocate for indies, and indies should take advantage of the unique networks they have created and think of new ways to engage — whether it’s through an anthology like ours, original works by booksellers, or something entirely new,” said Layte.

Matt Kaye, vice president of marketing and operations at Inkshares, told Bookselling This Week: “We’re thrilled to be publishing this book, and believe that our platform partnered with indie bookstores opens up a new publishing path — one that connects local authors and readers with local bookstores to publish books that may otherwise be overlooked by major publishers.”

Layte and Eelman said that work is starting soon on Volume 2 of The Papercuts Anthology. “It’s an exciting time to be a bookseller: we have the unique opportunity of having a physical space in order to sell books, communities that trust and support us, and it’s easier now to publish than ever before,” said Layte.

Inkshares offers different publishing services based on acquired preorders. At the 250-copy threshold, a book qualifies to be published through its Quill imprint, which provides an ISBN, light editing, limited distribution, and print-on-demand copies to all backers. At the 750-preorder goal, the publishing process is the same as with any traditional publisher: full editorial services, design, an offset print run, marketing, and distribution.

Inkshares pays author royalties of 50 percent on print sales and 70 percent on e-book sales for every sale after an author reaches the funding goal. For Quill, royalties kick in after 250 preorders are sold; for Inkshares’ full publishing tier, royalties start accumulating after 750 preorders are sold. All funds up to this point are applied directly to the cost of production. Learn more about Inkshares here.