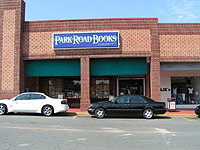 Five years ago, when Sally Brewster was employed at Little Professor Bookstore in Charlotte, North Carolina, and Frazer Dobson worked at Chapter 11 Books in Atlanta, they met at a dinner sponsored by the then Southeast Booksellers Association. In the intervening years, the two booksellers married, bought the Little Professor and renamed it Park Road Books. The Southeast Booksellers Association became the Southern Independent Booksellers Alliance, and Brewster was elected to serve as its current president.

Brewster began working at Little Professor in 1999, after leaving a job as a Random House sales rep. In March 2003, "just when everyone thought it was crazy to buy a bookstore, we bought it," she recently told BTW.

The store, which marked its 30th anniversary in August, has won readers' awards for best local bookstore for the past 20 years. Located in the 50-year-old Park Road Shopping Center -- according to Brewster, the oldest shopping center in North Carolina -- the bookstore is surrounded mostly by other local, independent businesses. The 3,800-square-foot bookstore some days feels "a little too big, and some days, a little too small," Brewster said with a laugh. 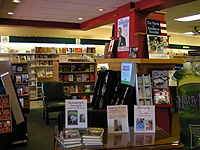 The children's section, cozily furnished with a big couch and beanbag chairs, is a comfortable place for quiet reading and is used for events and signings. Park Road hosts at least two events each week, many with local and self-published authors. "We welcome them all," said Brewster.

Visits by bestselling authors, such as Joshilyn Jackson and Sara Gruen, have drawn huge crowds. "Workman told us that we sold more Water for Elephants than any other single store," Brewster noted. "We're up to 594 copies sold."

Pat Conroy visits with each new book, and 2,500 copies of Our Endangered Values (S&S) sold when former President Jimmy Carter came for a signing.

Park Road's BookSense.com site helps customers keep track of all these events. "It's a great marketing tool and gives us an Internet presence," Brewster said of the site. "People refer to it all the time."

Brewster is adamant about the value of the Book Sense gift card program. "[The cards] have quadrupled our gift certificate business. Any bookstore is crazy not to use them," she said. --Nomi Schwartz