A Q&A With Elan Mastai, Author of February’s #1 Indie Next List Pick

Booksellers across the country have chosen the time travel-dystopian-romance romp All Our Wrong Todays by Canadian screenwriter and debut novelist Elan Mastai (Dutton, February 7) as their #1 Indie Next List pick for February. 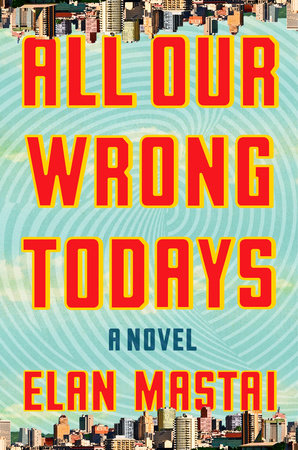 The book’s protagonist, Tom Barren, is a time traveler from an alternate reality: a technologically perfect utopian 2016 where all disease has been eradicated, gender equality is a given, and technology takes care of humanity’s every need. But when Tom steals his scientist father’s time machine and travels back to 1965, he accidentally interferes with history and ushers in the comparatively dystopian 2016 we know today. In our 2016, Tom meets the love of his life and discovers a vastly improved version of the family he would have had. Given a chance to return to 1965, Tom is faced with an impossible, heartbreaking choice: go back and restore the utopian world he knows (and all the people in it), or remain in our relatively analog world with the woman he loves?

Clay Belcher, owner of Signs of Life, a bookstore-café and art gallery in Lawrence, Kansas, described All Our Wrong Todays as “clever, witty, and poignant.”

Bookselling This Week spoke with Mastai about switching from screenwriting to novel-writing, inventing a “science of time travel” for the book, and the upcoming movie adaptation from Paramount Pictures.

Bookselling This Week: What inspired your idea for this book?

Elan Mastai: Since I was a kid I’ve been really interested in this idea of what happened to the future we were supposed to have. When I was growing up, my grandfather had an extensive collection of sci-fi novels and anthologies from the ’50s and ’60s and I was really fascinated by the covers, which had paintings of these wild scenes of aliens and foreign worlds and robots and flying cars and all these sorts of adventures and technologies that the post-war generation was just certain were going to happen. But even as a 10-year-old kid in the ’80s, I knew that there was a disconnect between the future that, decades earlier, people imagined we were going to have versus what we were actually having. Even as a kid that was really clear to me, that it didn’t happen the way they thought it was going to happen. I did not get a jetpack for my ninth birthday.

That interest continued over the subsequent years. I actually did my master’s degree in media studies and focused on what we then quite presumptuously called “media futures,” which meant looking at where technology, communications, and the media are going and thinking about the effects that would have on society. I ended up taking a swerve professionally as a screenwriter. I’ve been writing movies for the past 15 years, but those interests never left me and when I felt it was time for me to write my first novel it was a natural world to go back to.

I like the idea of somebody looking around at our world and saying, “Wait a minute, what if this is the dystopia? What if this is the world where everything went wrong?” You tend to think of dystopias as being something that happens in the future, but it occurred to me that if somebody from my grandfather’s generation were transported to now, he might look around and say, “Wait a minute, this wasn’t supposed to happen.” Then I started to think about the characters that this story would happen to and once I did that I started to fall in love with them so of course it felt like I had to tell their story.

BTW: How did you create a science of time travel in the book, not to mention some of the complex futuristic inventions of Tom’s world?

EM: My grandfather was a chemist so growing up we used to have a lot of conversations about science. He was a huge sci-fi fan but often grumbled about all the fake science in books and about how the real science is actually totally fascinating and if these writers would just take the time to figure it out, they could actually make their stories narratively interesting but also scientifically accurate.

What I tend to do is I figure out what the technology is that I want to exist and then I go backwards and do a lot of research figuring out how it would actually work. I look at where technology is now, what would have to be added, what would have to be invented. When you start to figure out where the holes are, then you’re going to start to plug it in with something that is plausible but doesn’t actually exist, something that is hypothetically possible even if no one has actually discovered it yet. I didn’t want to go too deep into everything even if during my research I had gone down a rabbit hole to figure this stuff out. You try to find the balance of filling in enough information that it is plausible and interesting for the reader, but not so much that you lose them to archaic technical data.

BTW: While All Our Wrong Todays is your first novel, you have been writing screenplays for the past 15 years. How was it different writing a novel versus a screenplay?

EM: Screenplays have a very specific style. They are written in present tense, they are always external, you have no character interiority; everything is conveyed through dialogue and action. It is very much a present-tense style written in the third person, and it’s a very lean writing style. You are trying to convey the maximum visual impact with the fewest number of words, and of course it also serves as a transitionary document in that it’s a blueprint for a movie that hundreds of people are going to collaborate on in a whole other medium, in sound and pictures, not actually words on the page.

When I was writing the novel in some ways it was incredibly freeing because I had access to all these literary tools as a writer that I typically have to deny myself as a screenwriter, most importantly first-person narration. Obviously the book is written in the first person as a memoir and just having access to the interiority of the character was a huge liberation because in a novel you can convey a character’s entire life in a single sentence. Being able to move through Tom’s life and through Tom’s consciousness, being able to jump from emotional revelation to some kind of witty joke to scientific discussion and back again, was very exciting for me.

BTW: Why did you decide to structure the book in short chapters consisting of a few pages each?

EM: Initially the short chapters were a reflection of me sitting down every night and making myself write at least 500 words, so each chapter was a day’s work. A couple chapters in, the structure started to remind me of Cat’s Cradle by Kurt Vonnegut so I went back and looked at the book. The similarity in structure had been unintentional, but then I decided to kind of work it into the narrative. A lot of the themes that Vonnegut was writing about in Cat’s Cradle were very much the same as the themes that I was writing about in my book, so although I didn’t do it intentionally in the beginning, I thought, well, Vonnegut is one of my favorite novelists so why not honor the influence, even if I hadn’t noticed it at first.

BTW: Paramount Pictures has already bought the film rights to All Our Wrong Todays. Will you be writing the screenplay or consulting on the production?

EM: The movie is being produced by Amy Pascal and right now I’m deep into writing the screenplay. The irony is that I originally thought I would make the idea for All Our Wrong Todays into a movie but then the more I started to think about it, the idea started to grow and stretch out in all these different directions and I realized that the way I wanted to tell the story was as a book, specifically as a first-person memoir or as a kind of fake memoir.

Being a screenwriter I’d never written a novel before, and I know that there are a lot of terrific writers who published their first novels after years of getting short stories published but I had been writing movies during the years that I might have been doing that. The idea of writing a novel was a little daunting, but also an exciting challenge as a writer, so I was really lucky that Paramount and Pascal Pictures wanted to turn it into a movie.

BTW: How have indie bookstores influenced your life?

EM: Book City is a local indie bookstore chain of four stores in Toronto, and there is one on Queen Street near where I live so I go there pretty much every other day. I spend a lot of time there and I know the staff well and love to hear their recommendations.

To me, the most alluring tourist attraction in any new city is a bookstore that I have never been to before, whether it is Copperfield’s in northern California or The Booksmith in San Francisco or Vroman’s in Pasadena or the sadly departed BookCourt in Brooklyn.

I was in Denver a couple months ago and made a pilgrimage to Tattered Cover. I love bookstores, particularly independent bookstores because they tend to have a unique and curatorial point of view. I love going to a place that is owned by a person who might actually be there and you can have a long, interesting conversation about books and they may, because of their specific tastes, carry an author that you’ve never heard of but who may turn out to be one of your favorites. That has happened to me so many times. And so for me, no matter where I am in the world, an independent bookstore is home.

BTW: How do you feel knowing that independent booksellers from across the country have selected your debut title as their top pick for the February Indie Next List?

EM: It is exciting and it is surprising, considering how many terrific novelists have books coming out at the same time. It’s really humbling as well; I really appreciate the support from the American Booksellers Association and from booksellers.

To be embraced and supported by all these booksellers around the country that I have never met, that we can kind of communicate and connect through literature, it’s very inspiring to me. You put your work out into the world and you have no idea how people are going to react to it, so this kind of positive support and encouragement as a first-time novelist just means the world to me.