A Q&A With Gabrielle Zevin, Author of April’s #1 Indie Next List Pick, The Storied Life of A.J. Fikry 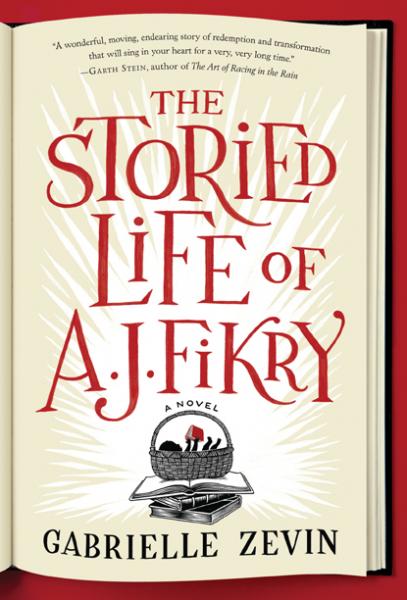 The talk of the independent bookselling community, The Storied Life of A.J. Fikry by Gabrielle Zevin (Algonquin) is a sweet, sad, heartwarming story that follows the life of a bookstore owner as he deals with the trials and tribulations of life, love, and the book business. Amassing a long list of recommendations by independent booksellers that made it the #1 pick on the April 2014 Indie Next List, The Storied Life of A.J. Fikry is “funny and quietly impassioned, and it will move you to tears,” said Kathi Kirby of Powell’s Books in Portland, Oregon.

Zevin, the author of seven previous novels and the screenplay for Conversations With Other 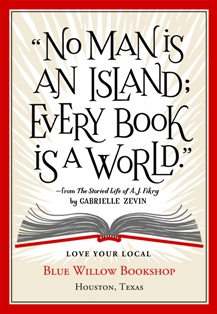 Women, will follow her appearance at the Winter Institute 9 Author Reception with a nationwide book tour this spring. (See the full tour schedule on Edelweiss; login required.) Booksellers in the Southern California region can also meet Zevin at the ABA Booksellers Forum at Mysterious Galaxy in Redondo Beach on April 11.

Customized bookstore posters for The Storied Life of A.J. Fikry are available for use in store and community-wide promotions by contacting an Algonquin sales representative.

Bookselling This Week: Booksellers have called your newest book “superbly satisfying,” “addictive and rewarding,” “a sure home run,” and “a sweet and compelling homage to the world of books and bookselling.” What sparked the idea for The Storied Life of A.J. Fikry? 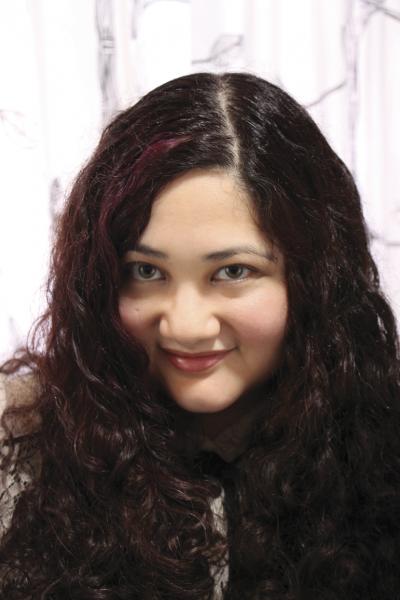 Gabrielle Zevin: I like to write books about things that happen to me. The book was kind of inspired by the trauma of getting published at 27. It’s this wonderful time and you’re really excited about it, but it’s also very traumatic, and one of the reasons it was traumatic is because of how little I knew about publishing. I think that’s what it’s like for a lot of writers. My ideas of publishing were based largely on what it is like in the movies. You write your manuscript, and then cut to: it’s been sent off to a New York publisher and now it’s shown up in the mail wrapped up in brown paper and tied with string, cut to: it’s a New York Times bestseller, and then cut to: you’re walking down Madison Avenue and the storefronts are all filled with only copies of your book. Obviously, publishing doesn’t actually work like that.

The interesting thing for me is how many people get cut out of the process when we have this fantasy narrative about what the great American novelist career looks like. For years, I’d been grappling with writing a book about books, but I didn’t really know enough yet. It’s been 10 years since my first novel was sold, so I think it took that long to really be able to understand something about the ecosystem that books journey in. Before I had published my first book, I really never read Publishers Weekly, I never knew that there were sales reps — and that’s kind of a key person that the movie montage version leaves out. I wanted to write a book that honored some of these people, and especially booksellers.

I think we’re at a moment in time where we’re making a lot of value decisions about the issues of print versus digital, buying locally versus online. We have some ability to decide what the future looks like, and as writers, we need to be interested in how this turns out, too; we have a horse in this race. I believe that people love their bookstores. I believe that, because I know that — because when I go to a town and visit somebody, the first thing they tell me is that I have to visit their bookstore. The bookstore for so many people defines their town; it defines what is good in the town. I believe that people love their bookstores, but I also believe they need to be reminded of why they love bookstores.

BTW: The Storied Life of A.J. Fikry included so many little details about the inner workings of a bookstore, from the stacks of galleys, to the eccentric customers, to the bookseller relationship with publishers. Why did you decide to set the story in a bookstore, and how did you learn so much about the bookstore business?

GZ: Even as a child, I really loved bookstores. I remember it was the first place I was ever allowed to go alone. When I was a kid, my mom would go to the grocery store and would give me $5 — which would buy you a paperback in 1982 — and send me to this place called Village Books, which was next to the Publix in our town. The first money I ever spent was probably in a bookstore. My parents were pretty protective — I’m an only child — but they really had this belief that if they sent me to a bookstore, I was surely going to be fine and not be kidnapped. What can go wrong in a bookstore? Not that I’m suggesting that people should leave their children in bookstores for child care!

I’ve always loved bookstores. So, to me, it seemed like a natural place to set the novel. It’s not a book I could have written a decade ago, because it would have been a book like that movie I was describing. I wouldn’t have known enough about what a bookstore really was.

I’ve gotten to meet a lot of booksellers and book people over the years. And sometimes, when you don’t have J.K. Rowling-level success, you’ll do an event and a lot of people will show up, and sometimes you’ll do an event and one or two people will be there ... and one of them is the bookseller. Luckily, booksellers tend to be pretty interesting and amusing people. I feel like I’ve been doing 10 years of research because when you go into a store and the only person there is the bookseller, you should talk and learn something. I’ve never actually worked in a bookstore, which I kind of feel like is a dirty secret. I always felt like I would be good at gift wrapping.

BTW: How did you go about inventing Fikry’s world — the island that he lives on, the variety of people in his town and family, and the bookstore itself?

GZ: I will start by just saying the island is a fiction, though I have met bookstore people from Nantucket Bookworks [on Nantucket] and Edgartown Books in Martha’s Vineyard and they’re pretty sure it’s them. It’s a combination of a lot of different stores, or what I imagine Island Books would be. I looked at a lot of pictures of stores online, and I remember the feeling and I know the smell of the bookstore, and I just imagined. People are so attached to their bookstores. They really do define the town for them, so I thought about what a bookstore would look like that served this purpose in the community.

In terms of the people, I wanted to introduce every single person by telling you what they read. I honestly think some of the most interesting responses you can get from people are if you ask them to grapple with, “What is your favorite book?” You’ll get an answer and maybe it won’t be truthful, but even that will tell you something. Every time I wrote a character, I thought about where they were in their reading life, what they had read, and what they would consider to be their favorite book. Pretty much everybody is introduced with the story of what they read.

BTW: Each chapter introduction is a short story analysis written by Fikry, from Roald Dahl’s “Lamb to the Slaughter” to Flannery O’Connor’s “A Good Man is Hard to Find.” Fikry, who is notoriously particular about what books he will read, mentioned a soft spot for short stories. Why did you choose to highlight the short story in your novel?

GZ: I had been thinking for years about writing a book about bookstores and booksellers but hadn’t really known what that idea was going to be. A few years ago ago, I started a brief sketch about a man and a woman who were bookstore owners who were divorcing, and a customer had come in wanting “Lamb to the Slaughter.” That’s the perfect short story to complement the end of a marriage; it is a story about the end of a marriage, in a certain way.

I’d had this little idea about short stories even back then, and I had always heard that short stories were notoriously hard to sell. People love to put them together, but regular people don’t seem to love to buy them, so I thought it would be good for a bookseller who was having trouble to have a particular love for the short story collection. Fikry’s taste is in the way, in a lot of ways.

In terms of Fikry’s comments that start out the chapters, I’ve always loved shelf-talkers in bookstores, and I thought of these as shelf-talkers. The reason I love shelf-talkers is because they’re this really beautiful, analog thing people do; they’re like little love letters to customers, and I love that. But even as I was doing them, I wasn’t completely sure that Fikry would have ever been satisfied with this set of titles.

BTW: The Storied Life of A.J. Fikry has been enthusiastically embraced by the independent bookselling community.

GZ: If you write a book about booksellers, it’s kind of scary because you know a lot of booksellers will read this book and if they don’t like it, they’ll let it be known. I’m amazed and glad beyond my wildest expectations. You really, really appreciate when you have this kind of support.

Stay tuned to Bookselling This Week for more updates on this indie favorite.