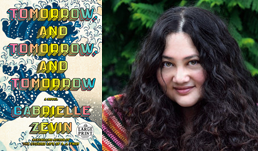 “I am deeply mourning finishing this book. Zevin has masterfully created a love story for friendship that will stay with me,” said Vina Castillo of Kew & Willow Books in Kew Gardens, New York. “While the characters were imperfect — so, strikingly human — following this span of 30 years left me wanting more.”

Here, Bookselling This Week talked about writing the book with Zevin.

Bookselling This Week: I noticed that you are a lifelong gamer — how did that drive you to write about two game designers’ relationship from childhood to adulthood?

Gabrielle Zevin: It’s funny, I think when people hear the word “gamer” they think more capital G gamer. They think the person who is playing maybe Fortnite or playing like 60-hour games like The Witcher, and I feel like it’s funny. I never really thought about games my whole life without thinking that much about what that meant. It was just a thing that I did that I really didn't necessarily do with other people. But the way I got into gaming was that my dad is a computer programmer. In fact, both my parents worked for IBM for their entire careers. My dad brought home a work computer and there were two games that were preloaded with IBM computers at the time. Playing games solved the particular problem — the same problem that, actually, reading books solves — which is: I was an only child and I had no one to play with. When you play a computer game, you can have somebody to play with, which is basically a solution to solitude.

In terms of that becoming a book, I never had any thoughts that it would. It was something I did when I wasn’t reading. The thing that intrigued me about it was the first generation of people who played video games as children, people born in the late 1970s, early ’80s. You know, that Oregon Trail generation, which means you’re either a very young Gen X or an old millennial. Those people are now turning 40 and 50. What really intrigued me was to write a coming-of-age story about people who would come of age alongside an industry. I think it’s something that a lot of people are doing, but that maybe hasn’t been fully explored in the literary space. It was not natural to want to write this book, but it was something that I think I had been preparing to write my whole life.

Somebody might not understand is that gaming is really another form of storytelling. When I talk about the first generation of people to game their whole lives, I’m talking about the fact that there are people that have experienced gaming as a primary storytelling experience. I think that the book is just as much about a career in the arts over many many decades as it is about particularly games.

GZ: I think in this case, I drew from things in my life, maybe more than I had before. When I started out writing novels, for me, fiction was sort of a mask I could wear. I like the idea of writing things that were very far from me, people that you would never mistake for me. But over the years, I’ve written more and more closely to myself — maybe that's just the way the world has trended too. For instance, I’ve never written a half Jewish, half Korean main character before and I’m a half Jewish, half Korean main character myself. All the places in the book are places I’ve lived — Los Angeles; New York; Cambridge, Massachusetts; Austin, Texas, where my parents lived; Tokyo, Japan, where I’ve made a movie adaptation of one of my books. They’re all places that come from my life. I think some of that was the pandemic. I started this book in 2018, but I wrote a large part of it during the pandemic, and in a way this was like travel when you couldn’t travel, just imagining places I had lived before. Those are ways in which the book is particularly personal, and it’s a book about having a long career in the arts.

I published my first novel 17 years ago. The thing you don’t know when you have a long career is what it’s like to have a whole trail of books behind you that represent how you felt at a particular time about particular things that may not be exactly how you feel now. Growing older, but the books I’ve written when I was young stay the same age. So that was another thing I wanted to write about, what a career in the arts looks like across many years. There’s a point in the book where the character Sadie talks about how she thinks she’ll never fail again. And I’ve had that experience at different times in my career, thinking that I’ve succeeded, I’ll never fail again. But the thing about a career in the arts is if you keep trying, there’s a chance that you'll keep failing. And that’s a good thing, in a way.

BTW: In your novel, there are several nods to social and political issues weaved throughout the real and virtual worlds (i.e., gender identity, marriage equality, racism, disability). Can you talk more about your inclusion of these topics and current events?

GZ: I think with novelists or artists in general, you either decide to write books that are part of the world or you decide to deny the world. And the more I’ve written, the more I’ve decided I’m going to be a writer who writes about the world. The gift of the topic of games is that it was like this great big bowl in which I could discuss many different things across time. I don’t think I’ve ever written a book that had a 30-year span before. As I’ve gotten older, it’s been really interesting to see how many things socially have changed over the years. You don’t have to fear these changes, but I think it’s useful to see them, to note them. The way we respond to certain characters, when you get to write characters across time, it gives you an opportunity to talk about time and how things have changed. It’s a gift of living longer, having that perspective.

BTW: What does this novel, about a great love story being a great friendship story, mean to you?

GZ: I think we have certain ideas — and maybe some of them come from novels about what love stories are — [that] love stories need to end maybe in marriage or children. And if it doesn’t include those benchmarks, there’s an extent to which people don’t see that as love. I wanted to write about people for whom their great love story could be a great friendship story, so Sam Mazur and Sadie Green. They have a 30-year artistic collaboration and a 30-year friendship, and they’re without a doubt the most important people in each other’s lives. But Sam is not a physical person, and Sadie is a physical person. In a sense, they’re just incompatible romantically. The dilemma between them is that what if the most important person in your life wasn’t any of the usual suspects, if it wasn’t' your spouse or your child, but really was your colleague or your friend. It’s sort of an impossible puzzle for these characters, but I don’t think it makes the love between them less deep. It’s a romance of the mind. It’s not a romance of the body, and that’s the story I wanted to write.

BTW: Sam, Sadie, and Marx often talk about perfection in the virtual/gaming world compared to their real life. Can you talk more about this escapism versus the realities they face on a daily basis?

GZ: When we think about going online, generally speaking, we’re still complete babies in terms of living with these technologies and how they’re changing human beings. I wanted to write a story that proposes that we don’t have to be the worst versions of ourselves behind the mask of an avatar. Some of the engagement people have online can be just as real as engagements they have in their real life. If you’re spending many, many hours on Instagram a day, that’s still real time and a part of you as a person. I think that people may believe that the person you are online is sort of a mask, but for some people, that mask is just as real as the person they are in real life. There’s still a possibility for real human connection and for us to be better versions of ourselves online. It doesn’t have to all be a dumpster fire.

That’s the thing that my characters live with: that they can perfect their game, but you can’t perfect humans and you can’t perfect life. I think about [that] as a novelist as well. The characters you write are sort of endlessly manipulatable. You can perfect their world and it can be the world as you wish it to be. That’s not what I do as a novelist, but I understand the impulse. The difference between writing a book and creating a virtual world or playing a game is that the person who plays the game participates in it more than the person who is reading the novel.

I’m a person who doesn’t go online at all. I was on a five-year social media hiatus, basically coinciding with the period in which I wrote this book. It’s not to say I’m negative about technology. I’m a person who’s deeply cautious about how being online a lot changes you as a person and actually changes the landscape of your life. An interesting thing to me is that I’ll hear people say, “Oh, you know, I never gamed in my life,” and I’ll say to them, “Well, have you ever used Instagram or Facebook?” Because essentially, those are games. They’re games in which you kind of collect validation in the form of comments, or number of followers, and that is a game. It’s been gamified to make you stay on it longer. So most people, even people who think they haven’t, have played games.

BTW: How have independent bookstores played a role in your life?

GZ: How haven’t they? It starts with your first novel. Before that, stores were a haven as a young person. I was that kid who just sat in bookstores, browsing and maybe buying every several weeks — that’s what only children do, they just hang out in bookstores. If not for the kindness of booksellers, where would I be?  That’s why I end[ed] up writing the storyline of AJ Fikry, but also in terms of my career. Independent booksellers really read books, and that makes a big difference. I wasn’t with a big publisher until this book, not in the adult space. I really feel grateful for booksellers that have ever taken their time to read a book of mine, even when some of my early novels didn’t necessarily do well, but I think because independent booksellers are so much not about data. They’re actually about the books and about reading the book, and I’m so grateful to them for that. It makes a huge difference. You’re not just how many sales you’ve made in the past. It’s about people, it's about relationships. I definitely wouldn’t have the career I have without the support of independent booksellers. Period.