A Q&A with Jas Hammonds, Indies Introduce Author of the November/December Kids’ Indie Next List Top Pick “We Deserve Monuments” 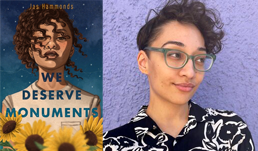 Independent booksellers across the country have chosen Jas Hammonds’ We Deserve Monuments (Roaring Brook Press) — a Summer/Fall 2022 Indies Introduce YA selection — as their top pick for the November/December 2022 Kids’ Indie Next List.

Hammonds (they/she) was raised in many cities and in between the pages of many books. They have received support for their writing from Lambda Literary, Baldwin for the Arts, the Highlights Foundation, and more. They are also a grateful recipient of a MacDowell James Baldwin Fellowship.

Nicole Brinkley of Oblong Books in Rhinebeck, New York, and Cynthia Compton of 4 Kids Books & Toys in Zionsville, Indiana and MacArthur Books in Carmel, Indiana, served on the panel that selected Hammonds’ debut for Indies Introduce.

Brinkley said of the book, “A masterpiece. When Avery’s family moves her to her dying grandmother’s home in Georgia, Avery doesn’t expect to find new friends — or to uncover her family’s haunting history. I don’t know how Jas Hammonds managed to weave so many beautiful, intricate layers into this story, but We Deserve Monuments is an absolute stunner. An intergenerational mystery, a tribute to first love, and one of the best YA books I’ve read in the last decade. Read this.”

Compton also shared: “This contemporary YA novel does so many things, and it does them all well. It’s a generational story of family and deeply buried hurts and estrangement. It’s a mystery of a long ago death in a small southern town with racial overtones and reckoning. It’s a love story between two teenage girls who are both trying to navigate their way to a different future than the one they grew up believing was theirs, and it’s a nuanced look at how family status and history affects friendships among teens. All of these parts are interwoven in a single summer with characters that readers will care deeply about in spite of each of their flaws. This is a simply stunning debut book.”

Nicole Brinkley: We Deserve Monuments might be one of my favorite YA novels of the past decade, in part due to how well it layers its many stories — all of which seem opposing at first glance. It’s a small-town mystery! It’s a breakdown of intergenerational racism and trauma! It’s a quintessential coming-of-age story! It’s a queer romance! How...how did you manage balancing all this story in such a beautiful way?

Jas Hammonds: Thank you so much! I’d like to say balancing all the threads came naturally, but it took many, many drafts to get right. By the time the book comes out, it’ll be six years in the making. In earlier drafts, the mystery really took a front seat; Avery and her friends were basically the Hardy Boys running around town, trying to solve a murder. That’s the version my agent and I took out on sub, and while we got some interest, we didn’t get any offers. It wasn’t until an editor asked me which element was more important — the murder mystery or the familial relationships — that something clicked into place. We Deserve Monuments as always been about, first and foremost, Avery’s relationships: with her family, with love, with herself. When I was focusing on the murder plot first, I realized I was doing a lot of dancing around what I truly wanted to write about. So I sat down and really dug into my characters, their backstories, their big loves and bitter traumas. I rewrote the entire novel, always keeping my characters’ relationships and desires in mind first, and the final version began to take root. So while the mystery is still simmering in the background, I finally have the complicated family dynamics and coming-of-age themes front and center like I’ve always wanted.

Cynthia Compton: I related so much to Avery's original friend group — the over-achieving, over-committed, college-application-oriented teens who collect activities and accolades. Were you part of that kind of group in high school, or did you just observe them?

JH: I was absolutely academic-focused in high school. So much so that when I look back at those years, I realized I missed out on a lot. I was so hard on myself in my quest to be perfect that I didn’t follow my heart that often. I didn’t apply to dream colleges because I was afraid of rejection, I made decisions to study things that didn’t interest me simply because I thought it was the “right” high-paying, high-achieving path. I stayed in relationships too long because I was afraid of being alone. Which is why giving yourself grace is a theme in We Deserve Monuments. I wanted Avery to learn lessons at seventeen that I didn’t learn until much later: When you listen to your intuition instead of others’ expectations, that’s when you truly open up and flourish. Surround yourself with people who honor your whole, beautiful self. Take breaks. Listen to your wants and state your needs. And have fun!

NB: There’s a moment in We Deserve Monuments where Avery’s friends cut her hair and she sees in the mirror, for the first time, the type of queer girl she's always viewed herself as. As somebody with a very similar experience — and who has many friends with a very similar haircut experience — what was the process like for you to nail that sort of quiet, quintessential queer moment within the text? Did writing it make you feel all the things that I did?

JH: I love this scene. While I do think there is no one way to look queer, there is something very special about that first “Gay Haircut” that a lot of queer people (myself included) have experienced. I remember the utter elation I felt when I finally chopped off most of [my] curls; it was something I’d wanted to do for a very long time. And I wanted Avery to experience that same joy, especially since it’s something that had previously been denied by her friends back in DC. I wanted to juxtapose the shame Avery felt after Kelsi and Hikari judged her lip piercing to the giddy excitement she feels when Simone and Jade facilitate the haircut. I think this scene really showcases the girls’ bond in a silly, beautiful way, and it’s a moment I hope everyone is able to experience with their own friends.

CC: I love the way you show how the main character’s relationship with her grandmother evolves through the book, not in a forced or overly sweet way, but in a way that feels authentic to the reader. Did you have a close relationship with an elderly relative that informed the way the story went, or can you talk about the relationship between a teen and her rather prickly grandparent?

JH: I never got the chance to know my maternal grandparents. I never got to meet the grandfather and my grandmother died when I was five so I barely remember her. Nearly everything I know about them is from stories my mom has shared with me. Over the past few years, I’ve tried to ask questions about them and document what I’ve learned, especially since it’s my sole connection to the Black side of my family. A lot of Mama Letty’s prickly demeanor is modeled after my maternal grandmother, Iris. According to my mom, she was fiery, a real tough cookie. On my dad’s side, I was fortunate enough to grow up around both my paternal grandfather and grandmother. I have a lot of memories of spending summers at their house in Tennessee, passing hours in their porch swing.

I think there is something so fascinating about exploring the relationship between grandparents and grandchildren. Grandparents can often be seen as this fountain of love and hugs and sweaters, especially if they’re only around during holidays and special occasions. But as you grow older, you’re reminded that they’re just people who’ve made mistakes and have their own ghosts. We Deserve Monuments is about that specific coming-of-age moment where you realize the generations before you don’t have it all figured out and how frightening that can be to the pedestal you might’ve placed them on.

NB: If you could tell independent booksellers one thing about We Deserve Monuments, what would it be?

JH: While We Deserve Monuments is a story that grapples with intergenerational trauma and deep-rooted racism, it’s also a story about queer Black resilience and love in its many forms. Writing it felt like taking the deepest breath of my life, and I hope if you’ve read and supported it, you’ve found moments to exhale, too.

Find out more about the author at jashammonds.com.