A Q&A With Stephan Pastis, Author of Timmy Failure, the #1 Spring Kids’ Indie Next List Pick 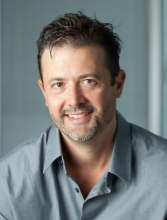 The number one choice of booksellers for this spring’s Kids’ Indie Next List is Stephan Pastis’ Timmy Failure, a chronicle of one the world’s most unfortunate — and funniest — kid detectives. In this middle grade novel, Pastis, a lawyer-turned-cartoonist, took a departure from his usual comic strip style and penned more than 200 pages of prose to accompany drawings that are interspersed throughout the novel.

Timmy, the detective in question, blunders his way through crime after crime with his business partner, a very unhelpful polar bear named Total. Pastis adds to this cast of characters a few of Timmy’s quirky classmates, an archenemy, and a cat named Señor Burrito, and the resulting romp has been a big hit with independent booksellers and their customers.

Pastis recently spoke to Bookselling This Week about what it was like to write humor and prose for kids as well as how he crafts his comedic commentary.

BTW: You are a seasoned cartoonist, though your previously published books and comics are for a slightly older audience than the readers of Timmy Failure.  How did you approach writing humor — and prose — for children differently?

Stephan Pastis: Surprisingly, it wasn’t that different. I just left out some of the more adult elements of Pearls and then wrote as I normally write.  I think to write specifically for kids risks writing down to kids.  And kids sense that. So I wrote to make myself laugh, and fortunately for me, I seem to have the mind of a 12-year-old kid.

In terms of the format, that was a big departure.  I’m used to writing in four-panel comic strip chunks. And here I had 250 pages. So that could be a bit unwieldy.  Every day before I started writing, I found myself re-reading the entire book up to that point. I didn’t know how else to re-immerse myself in the rhythm and tone of the book.

BTW: Did you draw on any of your childhood experiences or those of your own children when building Timmy’s world?

SP: Not intentionally. But when I go back and re-read certain parts, I recognize similarities to things that happened in my own life. Though I must admit, I never owned an Arctic mammal.

BTW: You have said that in your own life “humor is a reaction to and a defense against unhappiness.” Timmy’s home life is going through a great upheaval while he has madcap adventures, and we laugh — often at his expense! Is there a connection here?

SP: I think there is. You can heighten humor sometimes if you heighten the underlying tension. It gives the humor more of a contrast.

BTW: You often work with animal characters in your comics. How did you happen to choose a polar bear for Timmy’s partner-in-crime?

SP: Having already used a rat, pig, goat, zebra, crocodile, duck, cat, lemming, armadillo, goldfish, sheep, and dog, I had simply run out of animals. I think a polar bear was the only one left.

But in seriousness, Timmy doesn’t have a dad, so I think the polar bear is good because he’s big and can seemingly offer the protection that Timmy’s missing dad can’t. He’s also furry, so he’s comforting as well.

BTW: You are known for your comedic commentary on current events and popular culture, and Timmy Failure seems to follow in kind, especially regarding education. Care to share your thoughts about why going to school is such a miserable experience for poor Timmy?

SP: Well, personally, I was often bored in school. And sometimes that was due to teachers who seemed to just be going through the motions. So maybe that’s reflected in the book. But there were other teachers who were very engaging and treated me as an adult, and they made me become really interested in the subject matter. Each of those engaging teachers made a big impact on me.

BTW: Inquiring minds need to know: Why does Molly Moskins smell so strongly of tangerines?

SP: Must be her shampoo.

BTW: Timmy Failure was chosen as the #1 Kids’ Indie Next List Pick for Spring, and has earned much praise from independent booksellers across the country. What does the support of indies mean to you, and how do you think it has contributed to the success of this book?

SP: It’s been unbelievably great, and has made a tremendous difference. I feel so fortunate. I’m also grateful that I’ve been able to go to so many independent bookstores during my last three book tours (two for Pearls, and one for Timmy). Each store has been such a unique experience, and the people I’ve met there have been really, really wonderful.

BTW: Can you drop any hints about the type of hijinks Timmy will get into during his next installment?

SP: Mum’s the word. Or so my publisher has instructed me. I swear, if it was up to me, I’d spill the beans.