Save the Date: Children’s Book Art Silent Auction at BookExpo 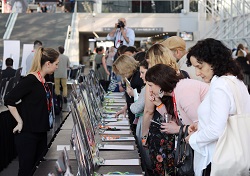 Attendees peruse the children's book illustrations up for auction at BookExpo 2018.

A variety of children’s book illustrators are donating original art from a published or forthcoming book to be auctioned off to raise money for the two organizations, which sponsor Banned Books Week, Children’s Book Week, and other activities that support free speech and literacy. This year, at least 100 pieces of art will be featured at the auction, with some of the donated art to be shown at other events, including the ABC Children’s Institute this June.

This year’s auction will also bring authors, artists, publishers, and booksellers together to honor and pay tribute to the late Ursula Nordstrom for her role in the history of children’s books as senior vice president and publisher of Harper Junior Books at Harper & Row. In her work, Nordstrom nurtured numerous children’s authors and illustrators, including many who were queer, and served as editor for icons such as Maurice Sendak, Ruth Krauss, Shel Silverstein, Tomi Ungerer, Margaret Wise Brown, and E.B. White.

According to her New York Times obituary in 1988, Nordstrom was “credited with helping to change children’s books from moralistic works written for adult approval to works directed at the emotions, imaginations, and problems of children.” Artists who contribute their own work to the auction will also be given the option to create an original piece honoring Nordstrom, to be specially featured at the event.

This year’s auction, which also coincides with the 100th anniversary of Children’s Book Week, will take place on Wednesday, May 29, from 5:00 p.m. – 7:30 p.m. in the South Concourse of the Javits Convention Center in New York City.