American Booksellers Association Board of Directors ballots, which must be returned to accountant KPMG by May 4, feature the names of two new candidates for the Board: Michael Tucker of Books Inc. in San Francisco and Collette Morgan of Wild Rumpus Books for Young Readers in Minneapolis. Their names appear along with those of Russ Lawrence of Chapter One Book Store in Hamilton, Montana, who is up for a second three-year term on the Board and who will serve for the first time as Vice-President/Secretary, and Mitchell Kaplan of Books & Books in Coral Gables, Florida, for a second term as ABA President. 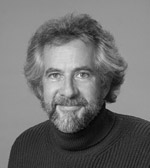 BTW recently had a chance to talk to Tucker about his bookstore and his focus if elected to the ABA Board.

Michael Tucker is president/CEO and co-owner of Books Inc., which has 11 locations under the Books Inc. name in San Francisco, Alameda, Mountain View, Burlingame, and Palo Alto, as well as Compass Books and Bzinc at the San Francisco International Airport and Compass Books & Cafe at the Downtown Disney District® in Anaheim. In 1988, Tucker began working part-time at Books Inc. to supplement his freelance graphic design career, but he was soon managing one of the 12 stores, then owned by Lew Lengfeld.

When Lengfeld passed away in 1996, he left Books Inc. to a few trusted employees, including Tucker and Michael Grant. "It was good news that we were left the business, and it was bad news that we were left the business," said Tucker, who explained that it was after the arrival of the big-box stores that had cut deeply into the stores' margins. To save the company, the new owners had to close 10 of the 12 stores and file for Chapter 11 bankruptcy protection.

By the time Books Inc. emerged from Chapter 11 in August 1997, only Grant and Tucker remained as owners, and the Books Inc. had four locations. Grant was responsible for the business' administration, and Tucker oversaw operations. When Grant suffered a fatal heart attack in 2000, Tucker became president of Books Inc. and worked to carry out their plans to open three additional stores over 12 months.

Tucker still operates the bookstores on the principles that helped Books Inc. turn itself around. "When we went into Chapter 11, we were left with neighborhood stores plunked down in areas where the chains weren't going to land on us," Tucker explained, and Books Inc. has continued to develop smaller footprint stores.

Books Inc. prides itself on customer service, which Tucker describes as the store's "external focus." Internally, Books Inc. is focused on training the next generation of booksellers. In 2003, Books Inc. developed a training program for its managers, book buyers, supervisors, and booksellers.

In addition to community involvement, Tucker told BTW, his focus as part of the ABA Board would be educational programming. "Ever since I worked on ABA's Booksellers Advisory Council, I've been very interested in getting booksellers involved with education. I've been encouraging people to participate in ABACUS. I've also been working together with other local bookstores of similar size on computer issues and problems with data storage."

If elected to the Board, Tucker said he would be "very excited to work with ABA, with Avin [Mark Domnitz, ABA CEO] Oren [Teicher, ABA COO], to continue to work on data storage issues that the industry faces and find a resolution." Tucker noted, "These are issues that come up at every meeting -- how to develop and enhance POS systems."

Tucker concluded, "I'm finally in a position where I've spent a lot of time training staff, so I won't feel like I have my hair on fire to take the time involved with being a Board member."