A year ago, Square Books in Oxford, Mississippi, posted a sign in its front window announcing its attitude toward everyone who might walk through its doors.

Proclaiming “All Are Welcome Here,” it reads:

Buddhists, Jews, Christians, Muslims, and atheists are welcome here, as are gay, lesbian, transgender, and heterosexual people. Republicans, Democrats, socialists, Marxists, Tea Party members, communists, unreconstructed Southerners, and Yankees are welcome here. Our doors are open to men, women and children, whether Chinese, Japanese, Native American, European, Mexican, African, Canadian, Puerto Rican, Caribbean, Russian, Australian, or Korean, North or South. We do not care one bit how you wear your trousers, what color you are, or how you do your hair, even though sometimes it is difficult not to find these things interesting.”

The broadside does prohibit guns, cell phone use, and smoking, as well as running and yelling —“except in our children’s store, where we are unwilling and unable to stop it.” The use of profanity and language that other customers may find offensive is also forbidden. But it reassures all that “people in Mississippi are among the nicest, most hospitable people in America.”

It concludes: “If you are anyone, from anywhere, we hope you will visit us, and we hope you may find something you would like to read. If you do not find the book you want, we will be glad to get it for you. Thank you for visiting Square Books and for being who you are.”

Square Books owner Richard Howorth wrote the broadside in the spring of 2016 when the Mississippi legislature approved a law allowing individuals, religious organizations, and private associations holding a religious or moral belief that homosexuality is wrong to discriminate against members of the LGBTQ community. The law was subsequently declared unconstitutional, but the state is appealing the decision.

“Having lived through Mississippi’s darkest days, including horrible acts of inhumanity, we could see a similar pattern developing anew,” Howorth said. “Additionally, because many writers, musicians, filmmakers, athletes, business people, and ordinary citizens may determine not to locate, perform, or visit in a state fostering such a climate, we believed a response was necessary.”

Customers have strongly supported the sentiments expressed by the broadside. “We first put it on social media and had an immediate and explosive response, entirely positive with one exception — a person who registered a very mild defense of the act,” he said. The store has sold more than 300 T-shirts featuring the broadside. It also offers printed copies that are sold at cost ($2.50 each).

Howorth has invited other booksellers to copy the broadside.

Nathan Montoya and Anne Vestuto, co-owners of Village Lights Bookstore in Madison, Indiana, posted the sign as one of several steps they took after a dozen members of the Ku Klux Klan held a recruitment rally in their town last summer. (The Klansmen were met by 300 protesters.) The store also created a display supporting equal rights for the LGBTQ community and started a book group that will focus on social justice titles.

The sign at Village Lights has been well received. “The occasional reader has been seen to shake their head dismissively or scowl and walk away. Many more, however, have reacted positively, taking pictures of it and coming into the shop to thank us,” Montoya said.

Village Lights is also selling a small version of the broadside and donating the profits to the ACLU. “These have moved briskly,” Montoya said. 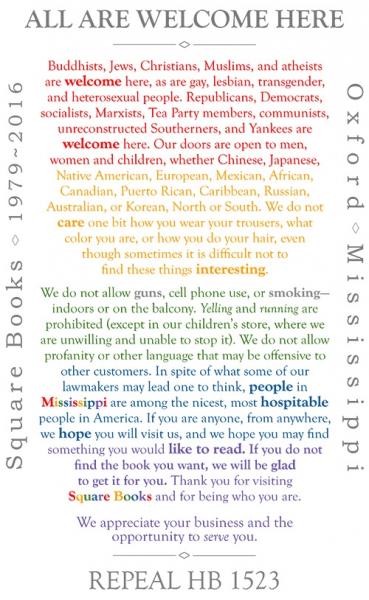