Throughout the month of May, students and readers joined authors Jason Reynolds and Ibram X. Kendi for a virtual book club to discuss Stamped: Racism, Antiracism, and You: A Remix of the National Book Award-winning Stamped From the Beginning (Little, Brown Books for Young Readers). The weekly book club was moderated by Hannah Oliver Depp, owner of Loyalty Bookstore in Silver Spring, Maryland, and Washington, D.C. More than 1,200 viewers were able to be accommodated during the event. 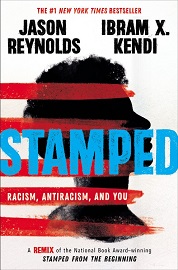 Dr. Kendi told Bookselling This Week that both he and Reynolds decided to hold the book club because there was a need in communities and classrooms across the country. “So many teachers and parents and students were reaching out to engage us on the book, and to figure out how to introduce the book to their children and students,” Dr. Kendi said. “We wanted to connect with them through this book club.”

He noted that he enjoyed being able to participate each week. “From the engaging questions, from being able to really bounce ideas around with Jason and Hannah, I really enjoyed the intellectual exchange. And we received such great feedback from book club members,” he said. “I hope it formed a community around the book and a community of people who will be teaching the book to young people, who will then be teaching the book to their friends and family members.”

Depp told BTW that, as a moderator, she wanted to “make sure that Jason and Ibram had the space to talk about the book in depth and get beyond the usual ‘why did you write this’ that we often only have time for during one-shot events and speeches.”

“I spend a lot of time in the industry talking about diversity, but rarely do we get the chance to talk about why this even needs to be a conversation,” she said. “Stamped guides us and our young people through this history and shows the legacy of antiracism and what that work looks like for all of us...And in this time of isolation and also uprising, it is wonderful to be able to talk to two of my brothers and our thought leaders every week.”

Depp noted that during the event and other similar events, attendees, especially those in majority white communities, tend to ask what they can do to combat racism. “[Those attendees] are not positive if they should speak or how to get the work on the ground started in their community,” Depp said, noting that while the desire for action is great, “it is also frustrating because behind it is a desire for us, the oppressed, to fix the system oppressing us. Often, we just spent an hour telling you what to do, but you didn’t hear it. It’s hard for all of us raised in a supremacist world because the answer is both simple and incredibly hard: do the work. There is no one-size-fits-all look to that work nor is it my job to tell you the best way to stop killing me.”

To be antiracist is constant, she added, as the world we live in is formed by white supremacy and that is a system working constantly to reassert itself. “I hope attendees see how that history led us to here and how it is working: killing Black bodies and destroying all people’s humanity,” she said. “I hope they see both our hope and our exhaustion when these two speakers guide us through history and show that it is active in our lives, from movies to local laws, it is in everything. I hope they leave this digital event space and move into the next step: they talk to each other to decide how they are going to do the work, educated by and in conversation with Black leaders, but not expecting us to do it for them.”

She also noted that the past few weeks have been hardship upon hardship, but “but the Black folks and minorities in your world are not waking up to this: this has been our whole lives.”

“As it has with the existing crisis in access to fair care, the pandemic has revealed the harsh truths of the systems we live in. We live in a society that’s just a cracked sidewalk paved over suffering, some of us fall through the cracks faster, but it doesn't have to be like this,” Depp said. “I am crying with relief and joy seeing orders pour into my store and other Black-owned businesses in response to this (and grateful for all my bookseller friends sharing about Black-owned stores) and I hope everyone actually reads these books they’re ordering and that we can get to work in the streets this week and beyond.”

Attendee Tanisha Brandon-Felder Ed.D. of the Shoreline School District in Washington told BTW that she participated in the book club because she “loves Jason Reynolds and [has] read all of his books.” Said Brandon-Felder, “When Stamped came out, I read it right away and have been looking for a place to unpack it.”

Both Reynolds and Kendi are very thoughtful and powerful, she added. “The book yearns to be discussed, and the history of race and racism in this country has not ever been truly told to this extent. It is a great tool for youth and adults alike.”

Attendee Heidi Perez of Durham Public Schools in North Carolina participated because she and her daughter are doing a book study together. Perez wanted her daughter to have “a clear image and voice to go along with her experience reading the books,” she said, noting that “so much of what our kids read in school comes from white colonial voices. We talk a lot about the author’s voice and perspective of the texts she reads in school. I wanted her to understand that this book is different. I wanted her to see and hear the black writer and scholars whose work and voices she was reading.”

Attendee Samantha Fogg of Washington said that she has been watching each week with her children while distance learning for school. After the first week of book club, she asked them to reflect on their school experience. “I expected them either not to answer or to have short answers, but they gave example after example of things they were being taught [or] had been taught that are racist,” she said.

“One of the most powerful things, though, is that finally, finally someone who wasn’t me, wasn’t one of my friends, is telling my kids about being anti-racist,” she said. “Finally, it wasn’t ‘Well, Mom and her friends think this but my teachers and my school say something else.’ This has been the most important, most beneficial, most helpful, most meaningful thing.”