The winners of this year’s awards are: 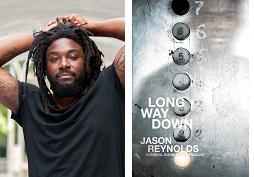 An awards ceremony will be held on Friday, March 16, 2018, in the James Madison Memorial Building of the Library of Congress. Jacqueline Woodson, who was named the National Ambassador for Young People’s Literature earlier this month, will serve as the ceremony’s emcee and guest speaker.

The ceremony will be preceded by a symposium on diversity in children’s literature. Co-hosted by the Library of Congress, “Seen and Heard: The Power of Books” will be moderated by Newbery Medalist and bestselling author Linda Sue Park.

WNDB will donate a minimum of 2,000 copies of each of the 2018 Walter Award-winning titles, Long Way Down and Schomburg, to schools with limited budgets across the United States.

The Walter Dean Myers Award, also known as “The Walter,” is named for prolific children’s and young adult author Walter Dean Myers (1937–2014). Myers was the third National Ambassador for Young People’s Literature, appointed in 2012 by the Library of Congress, as well as a champion for diversity in children’s books. The Walter Awards honor Myers’ memory and his literary heritage and celebrate diversity in children’s literature.

“Significant changes in the publishing industry have been especially visible with The Walters,” said Ellen Oh, founding director of WNDB. “The eligible titles submitted over the last three years since the awards’ inception have increased dramatically, from 50 titles in 2016 to almost 80 in 2017, to nearly 200 books that were considered for the 2018 Walters. The positive impact of the Walters feels like a fitting legacy to the late, great Walter Dean Myers.”