Scattered Books in Chappaqua, New York, which joined the American Booksellers Association earlier this month, is the first bookstore to be featured in Bookselling This Week’s new occasional series, “Welcome to ABA!”

The 1,200-square-foot store is owned by children’s book author and former finance professional Laura Schaefer. “I have a background in both business and writing so those kind of came together with this project,” said Schaefer. “I’ve always wanted to do something entrepreneurial like this. It was an idea that was always with me; I was subconsciously planning it for years before it even came to fruition.”

Scattered Books, which opened in November 2015, features author readings and signings; the Scattered Books Literary Lounge, which can be rented as a venue for parties and events; and a pair of free-roaming bookstore bunnies, Acorn and Oatmeal, who have their own Instagram feed and a weekly “Reading With Rabbits” story time. The store also offers customized “book buckets”: staff will curate, create, and ship a personalized container of books and gifts based on information about the recipient provided by the customer. 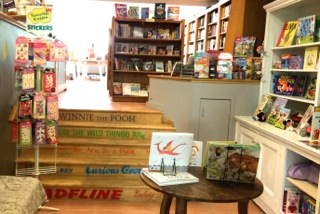 Schaefer, who runs the store with the help of a manager and several part-time employees, said Scattered Books’ location right outside of New York City in wealthy Westchester County has led to visits from celebrity customers, including Will Shortz and Bill and Hillary Clinton. Being in the Clintons’ current town of residence has also resulted in a bit of political activity, said Schaefer.

“Our store on Election Day was like the Twilight Zone,” she said. “There were bomb threats; people waving Trump flags; a pantsuit flash mob was secretly rehearsing in our backroom.”

More recently, Schaefer created a promotional music video for the April 29 celebration of Independent Bookstore Day, which featured a local dance troupe and a song composed to the tune of Justin Timberlake’s hit single “SexyBack.” Schaefer’s song lyrics included pithy verses like, “We’re bringing bookstores back/Cozy bookstores are where it’s at/New releases and all of that/Great reads fill up all our stacks.”

“We do a lot of offbeat things like that at the store,” said Schaefer, whose husband created the track. “It was a very fun project. All the dancers volunteered, and the DJ who recorded it did it for me for free because he loved the project… I always try to do those fun, different things where, at first, everyone says I’m insane and then somehow it works out.” 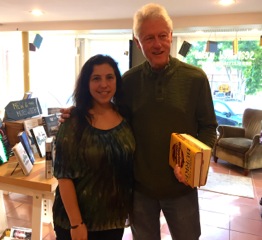 Among the authors who have appeared at the store are Lee Childs and Sebastian Junger, and upcoming in June is Patricia Roberts-Miller, who will sign Demagoguery and Democracy (The Experiment, June 13) as part of a fundraiser to help reunite a Syrian family.

Scattered Books also sells outside its four walls as the designated book vendor at local off-site events. Recent functions included a Chappaqua Public Library event with Jessica Shattuck, author of the number one April 2017 Indie Next List pick, The Women in the Castle (William Morrow), and the Katonah Poetry Society’s 50 Years of Poetry with Billy Collins. It is also a regular participant in such town-wide events as Art Around Town and Paint the Town Purple, a local campaign for autism awareness. 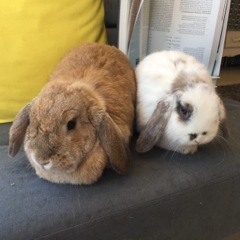 “I love being part of the community and being a resource. Any time I can tie something to charity or have some kind of fundraising component, I definitely do that,” said Schaefer. “I feel that you get what you give, so we try to give a lot, and I feel like we’ve gotten a lot, too, from authors, from the community, and so many unexpected experiences.”

Those experiences have included occasionally doing personal shopping for the Clintons. The famous political couple are frequent shoppers at the store, said Schaefer, who said she hopes to someday do an event with them.

“They are so sweet and lovely and supportive of the store: they put in special orders, they make an effort to buy things from the store, they come in all the time for gifts, and they’re just completely regular, lovely, smart people,” Schaefer said. “They chat with us: Bill tells us all these amazing stories that have happened in his life; Hillary and I talk about historical fiction. It’s so surreal how normal it is.”

Schaefer said she is excited to meet with other booksellers and ABA staff at this month’s BookExpo. While she has been to BookExpo before as a guest of her publisher, she expects that going as a bookseller will be very special.

“I want to meet people from ABA in person, and just really have the experience of the expo as a bookseller,” said Schaefer. “I am completely loving the entire experience of being a bookseller: all the challenges, even some of the mishaps. It’s been really fun for me. I feel that I’ve found my calling.”