The 2019 National Book Awards for fiction, nonfiction, translated literature, young people’s literature, and poetry were announced at a ceremony and benefit dinner on Wednesday, November 20, in New York City, along with two other awards for individuals who have demonstated lifetime achievement in literature. As announced in September, American Booksellers Association CEO Oren Teicher took home one of them: the 2019 Literarian Award for Outstanding Service to the American Literary Community. 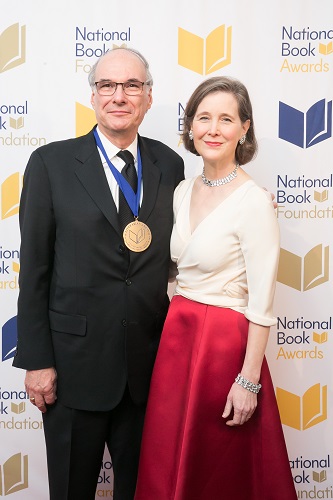 Upon being presented with the award by author, Parnassus Books owner, and personal friend Ann Patchett, Teicher, who retired from ABA at the end of October, thanked authors, publishers, booksellers, and the National Book Foundation, and expressed his gratitude for the privilege of spending 30 years working at ABA, including 10 years as CEO. Teicher described his tenure at ABA as “a dream job.”

“The creativity, ingenuity, and resilience of booksellers is nothing less than remarkable,” said Teicher. “And though I know the National Book Foundation has singled me out for this award —  for which I am deeply humbled — l accept it on behalf of the thousands of indie booksellers all across this land who every day —  tens and tens of thousands of times —  perform that special act of magic by placing the right book in a reader's hands. That simple act, whether it entertains, teaches, or inspires, makes the world a far better place, and, for me to have been associated with that magic has been the highlight of my professional life.”

He added, “I was asked recently what was it about my job at ABA that I liked the most, and I knew the answer almost immediately. I responded by saying that because of my years at ABA I have a friend in every town and city in America; let alone around the world. In the words of W.B. Yeats; ‘Think where man's glory most begins and ends; and, say my glory was I had such friends’.”

The National Book Foundation’s initial announcement in September cited Teicher’s work to emphasize the importance of the shop local movement, his advocacy for fair and sustainable tax laws, and his drive to produce increased media coverage and broader cultural awareness of independent bookstores. The National Book Foundation also noted that from 2009 to 2019, while Teicher was CEO, the number of independent bookstores jumped from 1,651 to 2,534, and association membership and store sales increased as well. 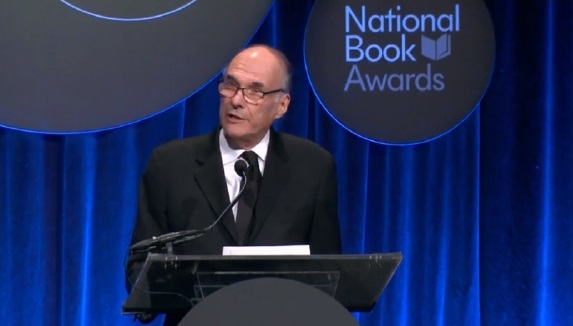 This is the 15th year the Foundation has presented the Literarian Award, which is given to an individual or organization for a lifetime of achievement in expanding the audience for books and reading. Past recipients include Maya Angelou, Lawrence Ferlinghetti, Terry Gross, the literary organization Cave Canem, Richard Robinson, and, most recently, the Alfred P. Sloan Foundation’s Doron Weber. Nominations are made by former National Book Award winners, finalists, and judges, as well as other writers and literary professionals from around the U.S., and final selections are made by the National Book Foundation’s Board of Directors.

In other previously announced awards, author and director John Waters presented author Edmund White with the Medal for Distinguished Contribution to American Letters. White is one of the most influential gay authors of the century and is known for novels such as A Boy’s Own Story and The Beautiful Room Is Empty.

The National Book Foundation (NBF) live-streamed the evening’s ceremony, which was hosted by former Reading Rainbow host LeVar Burton at Cipriani, on Facebook and the NBF website. The entire ceremony is currently available to watch online. The winners of the 70th annual awards are:

A group of judges, consisting of authors, critics, librarians, and booksellers, announced the list of five finalists per category on October 8, and longlists were announced in September. This year’s group of judges included one independent bookseller on each of the five category panels: Javier Ramirez, former manager of The Book Table in Oak Park, Illinois, and co-owner of the soon-to-open Madison Street Books in Chicago, served on the Fiction panel; Mark Laframboise, head book buyer at Politics and Prose Bookstore in Washington, D.C. on the Nonfiction panel; John Evans, co-owner of DIESEL, A Bookstore in Los Angeles, on the Poetry panel; Shuchi Saraswat, buyer and events coordinator at Brookline Booksmith in Brookline, Massachusetts, on the Translated Literature panel; and Kristen Gilligan, co-owner of Tattered Cover Book Store in Denver, Colorado, on the Young People’s Literature panel.

Publishers submitted more than 1,700 books for this year’s awards. To be eligible for a 2019 National Book Award, a book must have been written by a U.S. citizen and published in the United States between December 1, 2018, and November 30, 2019. All book and lifetime achievement awards carry a $10,000 purse.