The Lit. Bar Signs Lease in the Bronx

Noelle Santos has signed a lease to open The Lit. Bar, a general interest bookstore/wine bar, in the Mott Haven section of the Bronx. On her blog, Santos said it’s been three years and four days since she conceived of the bookstore, which she now hopes to open before the end of January. The exact location for the future bookstore is still a mystery; Santos said she will announce the address first to subscribers on her e-mail list.

Santos did reveal that the lease is for 10 years and the space is 1,700 square feet on the ground floor, plus another 600 square feet in the basement that can be used as an office, storage area, and content studio.

“The windows are huge and allow for amazing reading light and selfies. The layout is a little weird, but I think the nooks and crannies will make good for couches. Most importantly, The Lit. Bar will be easily accessible by public transportation,” Santos wrote. 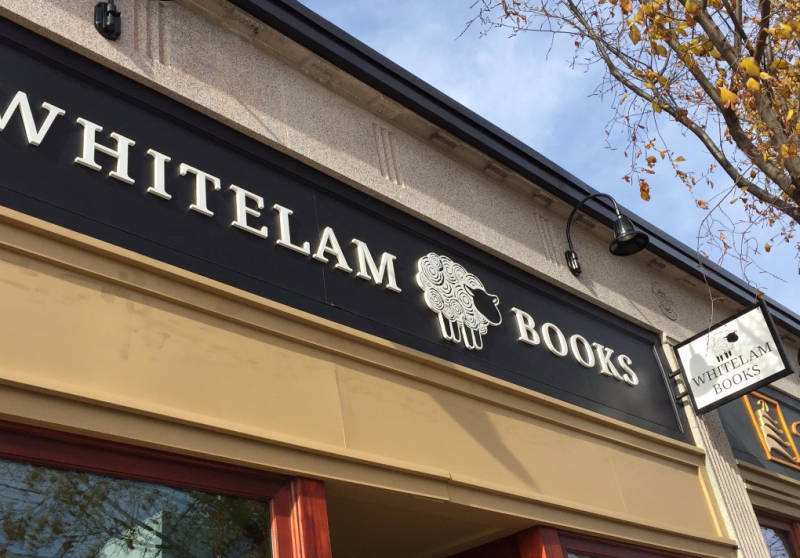 Whitelam Books in Reading, Massachusetts, held a soft opening on Monday, November 6. Just three days earlier, the store’s sign, which features a white lamb, was hung outside the shop, and owner Liz Hopper Whitelam wrote on the store’s Facebook page: “The signs are up! The windows are washed! It’s starting to look like a store around here...”

Just One More Page Books is open in Tunkhannock, Pennsylvania. The store sells new and used books as well as the works of local artisans and gift items. Owner Laura Wulff wrote on the store’s Facebook page urging shoppers to stop by for a peek: “What’s that?!? The papers off the windows?? Come by and see me while I update and add inventory this week!”

Wulff told BTW that this week is a "soft opening" for the bookstore with a grand opening set for November 18.

Tom Campbell and John Valentine, co-owners of Durham, North Carolina’s The Regulator Bookshop for 40 years, will be handing the reins of the store to longtime employees Wander Lorentz de Haas and Elliot Berger, effective March 1, 2018.

“We’ve had a great run, and we’d like to thank every one of the many thousands of marvelous people who have walked through our door over these years and kept this wonderful, unique place alive and thriving,” Campbell and Valentine wrote in a newsletter on November 8. “We can’t imagine finding better people to carry on the spirit of the bookshop than Wander and Elliot.”

The Book Nook in Monroe, Michigan, has opened its doors after 10 months of renovations following a New Year’s Eve fire at a vacant building next door.

Owner Janet Berns told The Monroe News that the store has new carpeting, new paint, and a new, accessible employee bathroom. The walls also needed repairs and some bookshelves were replaced. Though the fire did not spread to her store, the age of the building necessitated the extensive repairs, which took far longer than she originally anticipated.

Writing on her store’s Facebook page shortly before re-opening on November 4, Berns thanked her customers for following her “journey” back to business: “I hope you will come in and see the ‘new & improved’ Book Nook and buy [a] book or two (or ten :) ).”

Bookstores and other independent businesses in New England are prepping for the fifth annual “Cider Monday” celebration on November 27. Started by The Toadstool Bookshops in Peterborough, New Hampshire, as an alternative to online shopping on Cyber Monday, Cider Monday invites customers to visit their locally owned shops for a cup of the autumnal apple beverage.

Willard Williams, owner of The Toadstool Bookshops, wants shoppers to consider the value bricks-and-mortar stores provide to the community as opposed to ordering online for merchandise that comes from a distant warehouse. “Businesses celebrating Cider Monday offer a simple gesture — stop in and an enjoy a free cup of delicious wholesome cider and share a moment or two of reflection and thankfulness for all those who have deliberately chosen to keep some or all of their business local,” Williams said in a statement. He is inviting bookstores and other indie businesses to share their plans on the Cider Monday website.

The Seminary Co-Op Bookstore operated a pop-up bookstore at the Marriott Marquis Chicago as part of the first Obama Foundation Summit in the city. More than 500 civic leaders from 27 states and 60 countries attended the event, which was held October 31 and November 1, according to the Hyde Park Herald.

Attendees were able to shop at the bookstore’s display in the foyer of the hotel’s ballroom. “President Obama and Mrs. Obama’s Top Picks” were among the books displayed, including works that motivated the former president to choose a life of service. Other titles included those written by speakers at the summit and those chosen by Obama foundation staff. “They wanted to have a neighborhood presence and a bookstore, which is kind of unprecedented for something of this nature,” Adam Sonderberg, manager of the Seminary Co-Op, told the Herald. “It is a fantastic opportunity.”