Union Ave Books in Knoxville, Tennessee, has plans to expand its store next month.

Newtonville Books in Newton, Massachusetts, will celebrate its 20th anniversary on Saturday, September 29. 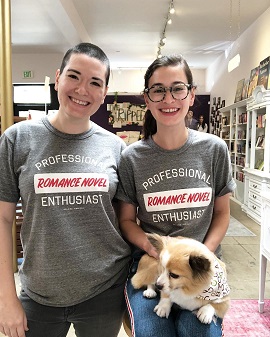 Bea and Leah Koch, owners of The Ripped Bodice

The Wesleyan R.J. Julia Bookstore in Middletown, Connecticut, celebrated its first year in business this past weekend.

The Ripped Bodice bookstore in Culver City, California, will be bringing more exposure to the world of romance through a recent deal with Sony Pictures TV.

The Alabama Booksmith was included in a list of 11 bookstores in Birmingham, Alabama, by Bham Now.